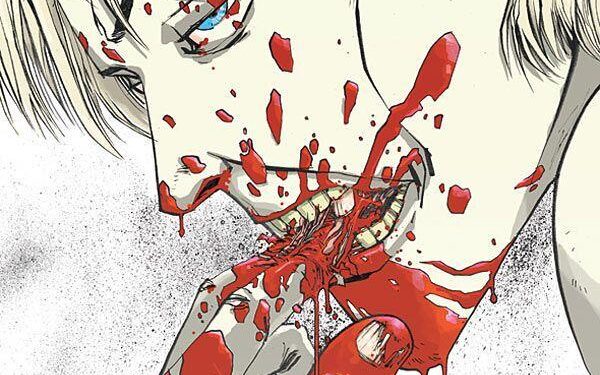 Nailbiter is a chilling tale of cannibals, mutilators, mass murderers and all forms of serial killers.

In Buckaroo lies a chilling reality: sixteen of the world’s top serial killers have all hailed from this small town. Is this coincidence or is there something the authorities are unaware of? The issue opens with the apprehension of the sickest of the Buckaroo Butchers, the Nailbiter himself, Edward Charles Warren.

Edward would target individuals that had the bad habit of biting their nails. Once he identified his target he would track them and kidnap them. Warren would hang onto his victims until their nails grew back. He would then chew the nails for them and continue to chew until he reached the bones. After his sick moments of pleasure, he would go on to kill them and consume them.

This story takes place three years later when one of his arresting officers believes that he may have found the connection to all this madness in Buckaroo. He requests back up from Army Intelligence Officer Nicholas Finch.

The reader gets to experience Buckaroo through the eyes of Nicholas Finch as he is startled by what this small town has become. You learn a bit about the town’s history via Finch’s encounters and it is not long before he ends up on the wrong side of the law. But things take a rather unexpected twist as one of The Butchers is out on parole.

The art in this book is dark and chilling, much like the subject matter on offer. There is something very uneasy about seeing somebody chewing on the fingers of a corpse. The facial detail and expressions work well in this title, especially when it comes to Edward Warren and his blank, numbing stare of a serial killer.

The Nailbiter series looks very promising. So far the writing has been good, leaving you waiting and wanting more.