It seems like Motocross fans have been left in the dust for the more popular sports game franchises out there. New motocross games are few and far apart. Good news is that Milestone has released MXGP2, the follow-up to the lukewarm received MXGP.

Have Milestone learned from MXGP, and would MXGP2 turn out better than its predecessor?

First off, MXGP2 is a simulation that puts all its focus on racing. Don’t expect to be pulling off any tricks in freestyle events. This can take some getting used to, especially if you aren’t versed in the many intricacies of the sport. I found myself lacking a lot in this department, and spent a lot of time in the last place.

In any sort of motorsport, customization is very important, from your vehicle to your team colours each aspect adds to the immersion and realism that these games try to achieve. MXGP2 starts by having you choose and customize your rider (although only the basics) and team. This includes a team logo, colours, and manager as well as the most important aspect your motorcycle.

The game has three modes available to players; MXGP, Career, and Online, from there on you are able to choose Championship, Time Trail or Grand Prix.

I found most of my time spent in the Career Mode, where you will build yourself from the ground up. Winning races, increasing your reputation and in turn leads to being promoted to better teams. Money that is earned through these races can be used to upgrade your motorcycle. Parts on the motorcycle can be replaced and each of these parts can have an upgrade, but should you grow tired of your current ride you can always sell it and buy a newer and faster one. Basically, it boils down to; make more money, to spend more money, in order to make some more money. Now this all might sound easy, but as I mentioned MXGP2 is unashamedly a motocross simulation game. This means that you will probably end up in last place quite a few times as you try and get the hang of all the different intricacies and factors to take into account. This is where I felt a bit left out in the cold. The game does have some very good tutorial videos, but I would have loved if there was a tutorial course or something similar for players to practise on while receiving tips. There are practice tracks but players still need to watch the tutorial then load into the track and hope they remembered what they saw in the video. It’s nothing major but it would have made learning how the mechanics worked a lot quicker and easier.

Having said this, once you get the hang of all the mechanics, it really starts to feel intuitive. Players are able to control almost every aspect of their rider and motorcycle. Deciding how much and when to lean into a turn can be just as important as deciding when to use the clutch or not, it is these split-second decisions that can mean the difference between last place and a win. Remembering what to do when nearing a corner while being bunched up by the other riders can seem chaotic, but it is in these moments that keeping your cool is important and making the correct decisions are crucial. Not only do you have to decide how to position your riders body, when to use the clutch, and when to accelerate or break, but knowing how the terrain can affect your grip is also important. Some areas might be more slippery than others and could cause a pileup. A mechanic that I was really pleased to see included in the game is the rewind feature, which helps avoid continues restarts. These are limited though. So even deciding when to use it is crucial. It is great that this mechanic has been included because getting use to the physics can be a bit tricky. There are three physics models, these become progressively more realistic until you reach the pro-level settings.

I did find some of the physics to be a bit wonky, especially when it came to air control.

MXGP2 definitely has improved visually from its predecessor, although it’s nothing mind-blowing. I did encounter some frame-rate issues which seemed to be more prevalent during the start of the races. I also noticed that when the crowd was designed they used the old cut-and-paste method. I also experienced really long loading times, which is made worse by the fact that there are so many of them.

MXGP2 is a step up from its predecessor, but it still has a way to go before getting the coveted first place. The new manual clutch and body positioning works well, but this is hampered by long loading times, some frame-rate drops and wonky physics.

MXGP 2 is a game that rewards you for learning its intricacies and mechanics. It is, however, a simulation game and therefore, it might not be to everyone’s liking. It’s not the best Motocross game out there, but it seems that Milestone is heading in the right direction. 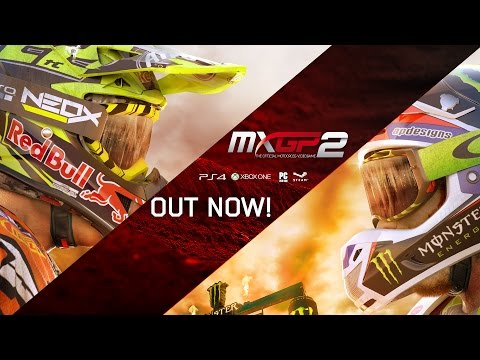