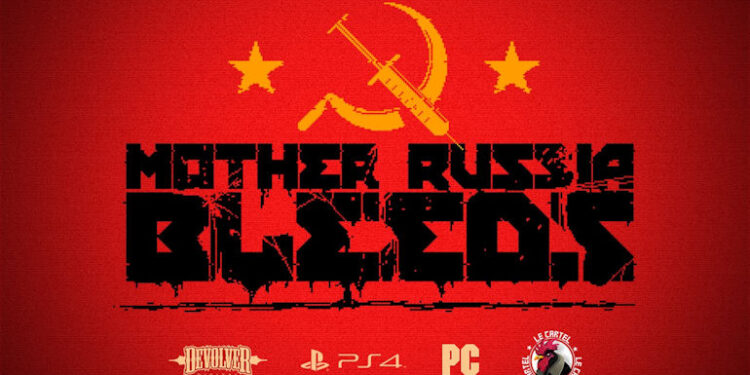 Over the past year or so, the gaming world, more specifically, the indie gaming world has drawn on the nostalgia of 90s gamers with a slew of 8-bit games hoping to cash in on the wave. While I won’t go as far as to suggest as much with the likes of Mother Russia Bleeds, but it definitely fits the mold. Developed by Le Cartel Studio, their first title on the global stage, and published by Digital Devolver, who have published many other successful 8-bit titles in the form of BroForce and Hotline Miami.

Mother Russia Bleeds has all the makings of a side-scrolling brawler, along with power-ups, a ‘mix’ of characters and co-op, destructible objects, weapon pick-ups, and a storyline that provides motivation for revenge for your chosen protagonist. Set in the backdrop of 80s Soviet Russia, you find yourself in a fighting pit as a brawler to prove you have what it takes before being whisked off by the Russian government servants. This forms the basis of the tutorial, which you may need for all your button mashing skills as you progress. If the tutorial is anything to go by, the gameplay isn’t overly complicated, and there is an erring sense of repetitiveness looming around the corner. After being arrested, you find yourself waking up in a cell addicted to a drug called Nekro, used by the government to control its citizens.

The series of chapters that follow is a process of landing sufficient kicks and knuckle sandwiches to the bad guys standing in your way of uncovering the truth. But, it isn’t as simple as that. Being addicted to the green drug, you’ll need it to provide a boost of health or power to progress without dying. Getting your hands on the drug, however, isn’t easy, and you’re left having to extract traces of it from certain dying enemies who show the effects of having used the drug. You yourself show side-effects of the drug with flashes of disturbing hallucinations, which make the character throw up some of the green slime in the process. There are four characters to choose, Sergei, Natasha, Ivan and Boris. Each of these follow the standard brawler selection options, the classic all-rounder, the more nimble, but weaker fighter, the slower moving juggernaut, and the mix-up of the leading protagonist, in that respective order. On paper, then, there is a good choice for your playing style, but as with those 90s side-scrollers, these characters don’t really offer anything different in the long run.

The gameplay is fairly simple, as you choose between punching and kicking, and then a combination of these in the force of jumping and sliding kicks and punches. There’s also the odd weapon you’re able to pick up use as more powerful version of the punch, which range from chairs, baseball bats, fire extinguishers, and later on, knives and guns. Using a mix of combinations and strategy yields higher points, but that increases the challenge in fending off 10 or more enemies on screen, and often you’ll be reverting to the tried and testing flying kicks or slides, in a series of button mashing, which tend to take out a higher number in one go, making it easy to stay alive. As with those old-school brawler games, dying is something that happens often, and Mother Russia Bleeds doesn’t offer dynamic saves, but rather checkpoints that are triggered whenever any dialogue happens. But don’t worry, you won’t be required to insert another 50c every time this happens. These dialogue checkpoints are also indications that a group of new enemies are on their way, some of which have different fighting styles, making them harder to beat, but nothing your trusty flying kick can’t take care of. The game also offers some co-op gameplay, with up to 4 players, which makes for good fun among friends. You do have the option of playing with AI-bots, but they’re more of a hindrance than an aid, dying frequently, after which you’re required to use some of your own health to revive them. This, and they barely do any damage to any of the onscreen enemies. I often leave them requesting health somewhere in the corner until I complete the wave of enemies before reviving them and moving on to the next checkpoint. Indie games of this nature thrive on two aspects, nostalgia and storyline. The first few minutes are filled with enjoyment as you reminisce on days gone by. Once this dies down, which it ultimately will do, the storyline needs to kick in and provide a good mix of intrigue, comic relief and a really good ending. And this is where Mother Russia Bleeds loses me, and may do for many players as well. There are one or two moments of comedy, some intrigue that doesn’t shape up well enough, and doesn’t do much different in the end. While you may fight your way through 8 different levels, taking you to different backgrounds and parts of Russia, the repetitive nature of the game isn’t deep enough to keep you enthralled throughout.

Mother Russia Bleeds is quite violent, but the 8-bit graphics does make it less so when compared to other photo-realistic titles on the market. That said, it is worth pondering how beating your enemies to death in a pool of blood, often times smashing their heads in with heavy objects, shooting their heads off in one go, or using their decapitated heads to beat up other enemies, all still doesn’t do enough to keep you on the edge of your seat for the full length of the game. The arcade modes add some variety when playing with friends, when compared to the sometimes monotonous story mode, but overall, it’s just not sufficiently gripping to keep you entertained from start to finish.