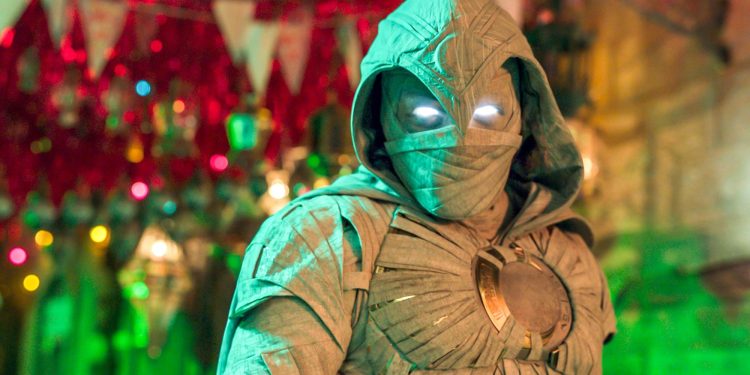 For those of you who haven’t seen it yet, Moon Knight marks Marvel’s journey into the supernatural as Steven Grant, a mild-mannered gift-shop employee, who becomes plagued with blackouts and memories of another life, discovers that he has dissociative identity disorder and shares a body with mercenary Marc Spector.

As Steven/Marc’s enemies converge upon them, they must navigate their complex identities while thrust into a deadly mystery among the powerful gods of Egypt. Along with this discovery, he also finds that he has been granted the powers of the Egyptian moon god, and quickly finds that with power comes responsibility. Is this a blessing or a curse?

The Disney+ series sees the introduction of the Egyptian gods into the Marvel Cinematic Universe along with Oscar Isaac’s main character Steven Grant.

Mohamed Diab serves as the chief director of the series alongside Justin Benson and Aaron Moorhead. Moon Knight also sees a star-studded cast such as the already mentioned Oscar Isaac in the role of Steven Grant, Michael Benjamin Hernandez as Marc Spector, F. Murray Abraham as Khonshu, Ann Akinjirin as Bobbi, David Ganly as Billy, Antonia Salib as Tawaret, Khalid Abdalla as Selim, Shaun Scott as Crawley, Lucy Thackeray as Donna and many, many more.

Plans for a Second Season

After the first season of the show aired, Isaac, May Calamay playing Layla El-Faouly and Ethan Hawke playing Arthur Harrow all claimed that they had heard no plans for season 2 of Moon Knight.

Isaac shared at the time:

“You know, I think we really approached it as ‘This is the story, and let’s just put everything out on the table on this story.’ There’s definitely no official plans to continue it. I think it would depend on what the story is. That being said, I love being Steven. I just love it. It’s just like, physically, it’s so much fun to be him. So you know, if there was a story that really made sense, I’d be happy to be part of it.”

Moon Knight season 2 might be a go, or Oscar Isaac and director Mohamed Diab may just be having some fun. Judging from a recent TikTok video that seemed to have been created and posted for Diab’s daughter’s TikTok account, she asks the pair, “The question on everyone’s mind, is there a Season 2 [of Moon Knight]?”

The director seems caught off guard by the question but Isaac effortlessly responds, “What else would we be doing in Cairo?”

Whether they are actually in Cairo to film the second season or not, the video has fans across the world hoping that Kevin Feige has greenlit season 2 of Moon Knight and are eagerly awaiting further news.

As it is, Feige blew an epic opportunity to include the Egyptian gods in the recent Thor: Love and Thunder. But then again, it also feels that the stoic Egyptian gods might not have been a good fit for the “goofy MCU gods” that were in the latest Thor movie.

Are you on the side of fans who are hopeful for season 2 of Moon Knight or do you think the story has run its course?