Micro Machines World Series is like trying again with an ex who lost a ton of weight after the break-up and looks fantastic, but when you get to talking, all she wants to discuss is social justice issues and yoga, and honestly, who has time for that sh**?

Anyone remember the 16-bit Sega Megadrive? A friend of mine had one and he had Sonic the Hedgehog 2, Mortal Kombat and Micro Machines something or other. It was 1992 and I was getting ready to write a major year-end exam, and I distinctly remember going over to his place the night before writing biology. I was just going to take a breather for an hour or so and then get back and hit the books…

He had just gotten the game as a gift and we thought we’d give it a quick look, after all, there would be plenty time to play it once the exams were over…

We plugged in the cartridge and suddenly it was midnight. We spent 4 hours chasing each other’s tiny little toy cars around everything from a messy kitchen floor to a pool table. It was awesome! It was only when we got to the desktop challenge, where you have to race around a track drawn with chalk and dodge erasers and sharpeners on top of a school desk that the vague memory of me needing to do something important came creeping back. When I eventually left there, the reproductive cycle of the earthworm was the last thing on my mind, all I could think about was how awesome the game was!

I got a C for biology, but it wasn’t my fault. Honestly, who gives their child a new video game the day before a major exam? If we’re being honest, I was the victim.

Forgive that bit of nostalgia, but it’s important to lay that backstory so you understand how excited I was when I got asked to review the latest version of Codemasters legendary title. I don’t know what I was expecting. I know that they released a game a few years back called Tiny Turbos or Turbo Toys or something like that, which now that I’ve seen World Series, I understand was, in essence, Micro Machines. Probably a licensing issue. 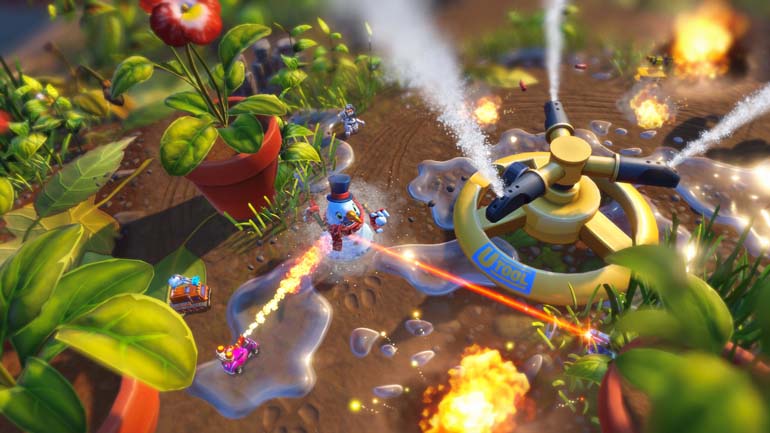 Well, that issue is no more!

I’m wise enough to know that you never revisit TV shows or movies or anything that changed your life when you were growing up. It never ends well. The rose-tinted memories of those things always end up dying in the cold dark wet alleyways of your older more cynical mind.

So I loaded the game, and it was all there, the tiny little monster trucks and police cars (cute AF), all the tracks around what could be any youngsters house on a Saturday morning when mom and dad have locked the bedroom door and left you to make your own breakfast and entertain yourself for an hour while they “sleep in”.

Sticky syrup all over the kitchen, Mountain Dew on your bedroom floor, the sound of Saturday morning cartoons coming from the TV room.

I could almost taste the Kellogg’s Frosties!

I’m not sure how to quantify this feeling.

I guess I’ll start with the fact that there is almost no Single Player Championship mode. Some of you may know by now that I don’t play well with others, so this presents a real problem for me. The focus seems to be on the Multiplayer aspect of the game. One can argue that the Multiplayer is and always has been the soul of Micro Machines, but the last I heard, we aren’t living in Soviet Russia! I want the choice! 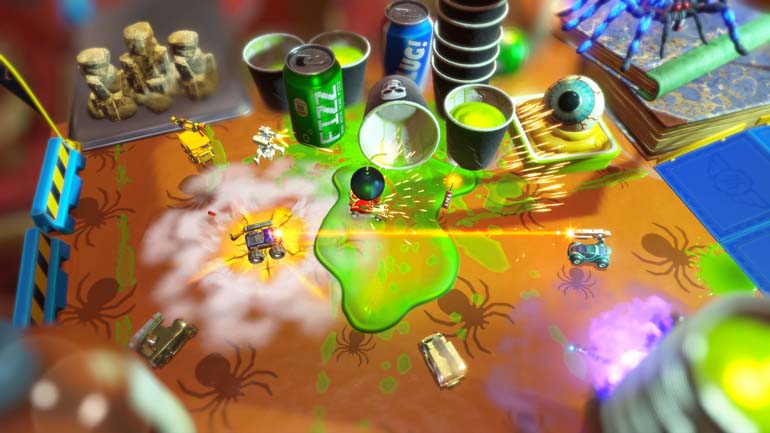 Speaking of Russia, there is a really enjoyable Battle Mode. 12 teeny tiny little tanks and snowplows and hovercrafts chasing after each other with Tommy Gun’s and Hammers and Explosives wreaking havoc all over a game of Hungry Hippo.

The graphics are obviously much better and the top-down gameplay makes it feel at least a little familiar, but control is an illusion, and like catching the soap in the shower, it largely comes down to luck, not skill.

To be honest, that is about as far as the similarity to the original classic goes. In trying to make the game a fresh take on the original, it feels like Codemasters have borrowed too much and tried too hard and the result is something soulless. There is Nerf branding everywhere and the Toy Story-esque feel of the graphics make it feel like a really long Disney/Pixar commercial.

I’m sure that number will grow over time, but 12?

There must be a few thousand Micro Machine toys available, and they give us 12!

A small consolation is that you gain 15 arena maps, but considering how poor the Multiplayer mode is currently unless you want to play against bots most of the time, you won’t be using them much. 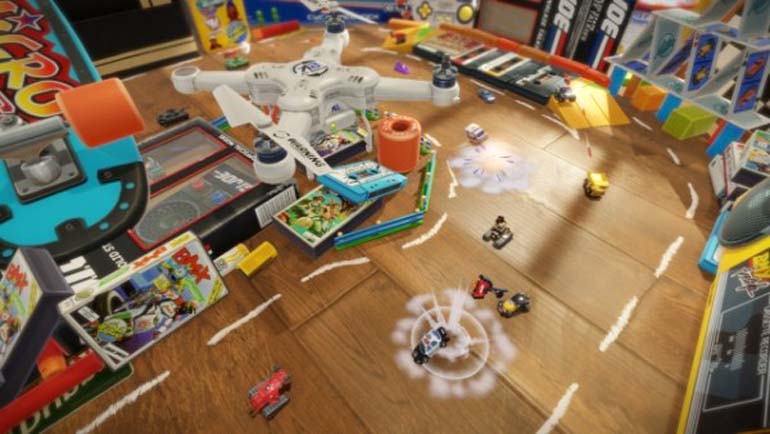 I will give them this, the non-linear approach to the arenas is very clever, where you can use shortcuts and obstacles on track to gain an advantage in battle, like using a toaster to fire you to another part of the arena, or a sprinkler to spin you out of harm’s way…

The downside is that all this action makes Arena Mode feel like a McDonalds Play Place on a Saturday morning – Chaos.

Battle Mode is not much better. Each vehicle has 3 special abilities and this mode is most fun when you play to the special abilities, but currently, you are most likely only going to be playing with and against bots, so the fun is limited.

So the focus for World Series would seem to be Battle Mode, which is sad as the original was more about the Elimination Mode and the straight forward racing, and maybe they feel that their target audience wants that instead, but I found it all getting very thin very quickly. 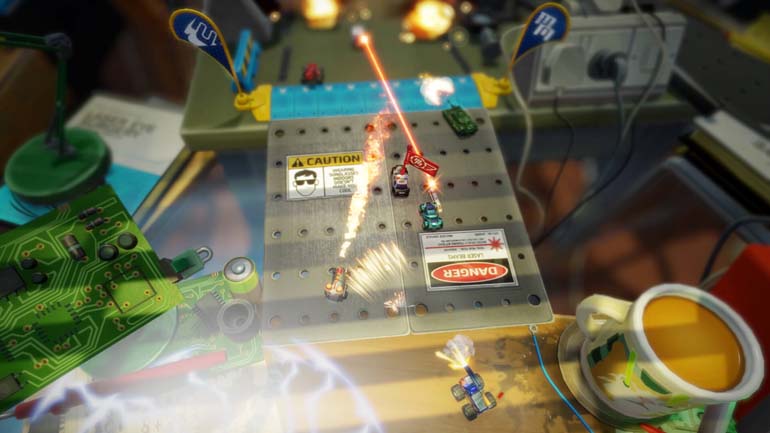 However… I suspect the game has some voodoo built in.

For all its shortcomings, I have played about 100 Death Matches. There is something about the game, maybe it’s the tracks that just put you back in your childhood by perfectly capturing how you would have played in that phase of life, maybe it’s the (very) repetitive music that messes with your beta brain waves, but this game is addictive in a fidget spinner kind of way…

There really isn’t much to it, yet you can’t stop playing, and even though the exact same thing happens again and again, the gratification part of your brain just floods your system with feel-good nostalgia…

This theory is reinforced by a track that casually introduces an Ouija board as an everyday toy found in every child’s toy box. 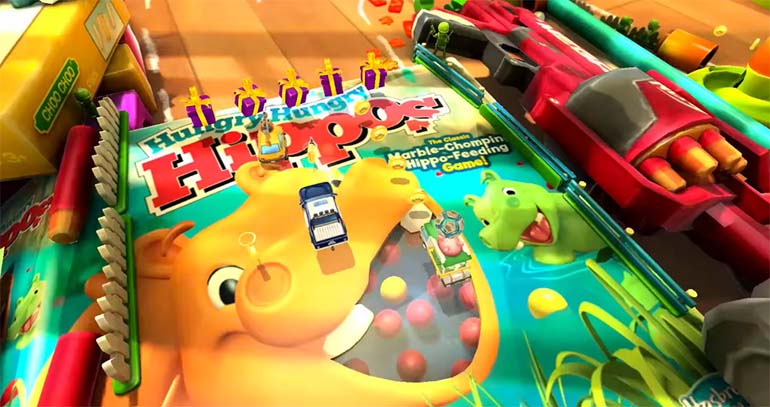 We’ve all seen The Exorcist, right…?

If I was wanting to pay money for an authentic trip down memory lane, I would buy 2014’s ToyBox Turbos. What you lose in modern graphics you more than makeup for in additional vehicles, tracks, music and replay madness.

Unfortunately, Micro Machines World Series is a NO from me.