Mickey Rourke Has Some Harsh Words For Tom Cruise 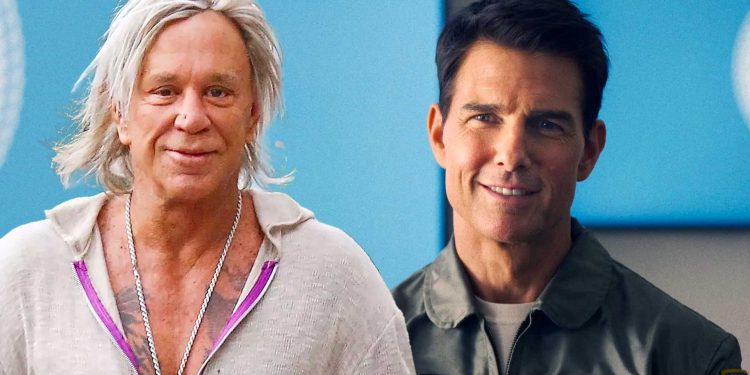 Mickey Rourke has come out swinging against Tom Cruise. He reckons that the Top Gun star isn’t a good actor and calls him ‘irrelevant’.

While Tom Cruise’s highly anticipated sequel Top Gun: Maverick is soaring high in cinemas currently, Mickey Rourke tried to pull him down a peg or two.

During an interview with Piers Morgan, the Iron Man 2 star said that ticket sales do not necessarily mean that an actor is good at their craft. Along this same line of questioning, Piers Morgan asked Rourke about how he feels about Maverick drawing in more than $1 billion at the global box office, to which he replied:

“That doesn’t mean s**t to me. The guy’s been doing the same part for thirty-five years. I got no respect for that.”

Rourke went on to list some of the actors who he admired, saying “I don’t care about money and power. I care about when I watch Al Pacino’s work and Chris Walken and De Niro’s early work and Richard Harris’s work and Ray Winsone’s work. That’s the kind of actor I want to be like. Monty Clift and Brando back in the day. A lot of guys that just tried to stretch as actors.”

Morgan asked Mickey Rourke without beating around the bush whether he thought Tom Cruise was a good actor, to which he replied without pulling any punches, “I think he’s irrelevant, in my world.”

Mickey Rourke isn’t the only celebrity to rip into Tom Cruise at the moment as he has often been criticised for his choices and actions.

King of Queens star Leah Remini has recently called Tom Cruise out as well, not for his acting but for what she has called his ‘crimes against humanity.’ Tom Cruise joined the Church of Scientology in 1986 under the influence of his first wife, Mimi Rogers, who has since left the church. Leah Remini was formerly a Scientologist herself until she left in 2013, whereafter she has always been very vocal about her negative experiences with the church.

Remini has recently reiterated the story of Claire Headley and her husband Marc, also former Scientologists who had filed a court case against the Church of Scientology in 2009, alleging that the organisation had violated people’s human rights and human trafficking laws.

The case was quickly dismissed as courts decided that the Church of Scientology was protected by ‘ministerial exemption’, a legal doctrine in US law that protects religious institutions from legal prosecution.

Sharing the accusations against both Cruise and Scientology, Remini warned people: “Don’t let the movie star charm fool you,” before thanking Headley for her courage in writing about her allegations. Remini also reiterated the allegation that Cruise ‘knows exactly what’s going on in Scientology.’

Wherever celebrities go, both love and hate follow as some love them for their work, and others hate them for their influence, looks, money, fame, and success. It is unfortunately part of ‘show business’ to have to deal with both the good and the bad.

What do you think about Mickey Rourke’s comments about Tom Cruise?