Damn, now I've got to collect them all! 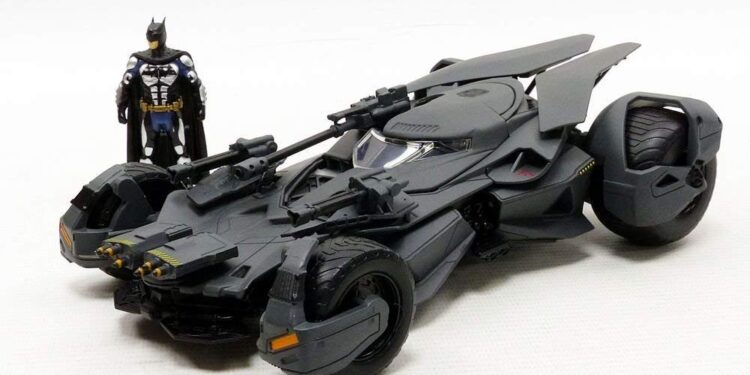 The Metals Justice League Batmobile toy is the perfect purchase for fans.

After receiving a lot of criticism about how Batman used the Batmobile’s weapons in Batman v Superman to kill various goons, one would think that they would dumb it down. However, in true Snyder style, the Justice League version of the armoured vehicle featured even more weapons. Of course, that wasn’t the only change made to the tank. After Superman smashed it in BvS, Batman took the opportunity to modify the Batmobile. The result is the high-powered ride we saw in the final film.

On first glance, the Metals Die-Cast Justice League Batmobile toy is a sight to behold. Everything that made the Batmobile cool in the film is here, rocket launchers included. It’s highly detailed (with small movable parts) and even comes with a Metal Die-Cast figure of Batman in his tactical armour (which is based on Ben Affleck’s muscled-out version of the character). One look and you’ll be making space on your desk or shelf.

Of course, this is just one of many.

Prima Toys is offering fans a collection of 1:24 scale Batmobile vehicles based on several films throughout the course of the franchises’ history. And that includes the Tim Burton and Christopher Nolan films too. If you’re a serious collector or even just a Batman fan, this is a collection worth looking at as all of the figures and models are really great replicas (they’re pretty much film-accurate). Set them side-by-side and you’ll be amazed at how impressive they are. For the price point, Gotham’s notorious vigilante and his Batmobile have never looked this awesome in a toy collection.

The first thing you’ll notice when opening the box – if you really want to (as they look pretty good in the original packaging too) – is just how solid the Metals Die-Cast Justice League Batmobile is. It’s built like a rock and weighs about as much too. The entire sculpt is comprised of both die-cast and plastic parts.

Like most of the Metals, including the 2.5″ figures, these are probably not made with kids in mind. That, of course, is not to say that they can’t be played with. The Batmobile’s wheels (rubber tyres) turn and they’re pretty fun to zip around the floor – although they are able to remain stationary too. But I can imagine that the details and the display packaging might attract more serious buyers or those who genuinely appreciate the craftsmanship on display here.

There is a lot to praise when it comes to the Metals Die-Cast Justice League Batmobile toy. The paint job is really good and, as mentioned before, it’s pretty robust. That said, there are two issues I have with this specific toy. Firstly, while the cockpit is fully realised, with the canopy raised you can see all the various controls, seat and steering wheel in place, the actual figure doesn’t fit into the vehicle. This could be due to the fact that it has no articulation, the long rubber cape or it might just be that it’s a little too big to fit. It’s hard to tell.

My second complaint is with regards to the colours used on the figure. The shiny, bright silver and blue accents underneath are nowhere near how they looked in the film. We all know Whedon messed up most of the colours from Zach Snyder’s Justice League, but at least he didn’t add a blueish tint to the suit. I’m not sure what inspired that decision.

Of course, these are minor issues and the general look and feel of the greenish/grey matte-finished vehicle and the glossy figure is great. It’s also important to mention that, unlike the previous Batman v Superman version of this vehicle released by the manufacturer, this model kit comes fully assembled. Which is great for those wanting to keep it boxed and those who don’t want to fiddle with instructions after a purchase.

This is a budget-friendly toy that will look great on any bookshelf or desk. Serious collectors will grab the chance to own all the vehicles in this collection.