During a pseudo-historical sequence of events – code for ‘things are about to get silly around here’ – a man named Goodluck tasks you with travelling to Dite, an alternate dimension populated with crystalline zombies. There, you’ll assist the Charon Corps with their investigation of teleportation technology and collection of Kuban energy. Soon after arrival, you realise that there’s nothing left of Charon Corps, except for a quirky, soda-can-shaped AI suffering from multiple personality disorder. That’s not just a mouthful, it’s Konami’s “ingenious” plan to reuse MGS V: The Phantom Pain’s assets without the express need to justify, or even bother to explain, much of the game’s lore, world or its characters. That’s not to say Metal Gear Survive is short of the lengthy opening exposition that characterises all Metal Gear games, or the extended conversations between characters, but it is lacking any sort of appeal – Solid Snake you ain’t.

That’s not quite true. Your protagonist – I called mine Fake Snake – may be less interesting than every other significant character in the game, and is hard to care about, but who needs a story? It’s a zombie game. All you really need in a game like this is a shotgun and a direction to shoot in. To its credit, Metal Gear Survive has plenty in the way of “go there”, “protect this” and “kill that”. It even does it in rather compelling fashion, filled with interesting diversions, a worthwhile hunger and thirst mechanic, and loads of high-octane action and suspense-filled stealth sections. Metal Gear Survive is actually a decent survival game, maybe even a good one.

In my opinion, it should just do away with the absurd introduction to its story, cut its ties with The Phantom Pain and dive headfirst into its enjoyable mix of action and tower defence gameplay. You’ll have fun, I promise; probably. Throughout the length of the campaign, you’ll be given ample opportunity to carve a gratuitous path through hordes of zombies, called wanderers. To do that, you’ll have the close-quarters combat and gunplay synonymous with Metal Gear with the ability to quickly build defensive items like fences and barricades from a game like Fortnite.

Don’t think it’ll be easy, either. Dite is an unforgiving place. A large part of its landmass is covered in a thick, deadly dust that will kill you if you don’t have an oxygen mask on hand. Even when you do, it’s a dark, foreboding place to explore, marred by low visibility and ominous sounds enclosing all around you. If that wasn’t enough, you’ll slowly run out of oxygen, putting a timer on each excursion into the dust from your secure base camp. To make it worse, something a lot deadlier than wanderers inhabits the dust, and it’s big. Escaping the nightmare world that is Dite is Metal Gear Survive’s story in a nutshell. It’s worth mentioning that you’ll also have to establish a base of operations for you and the survivors you meet along the way. That includes building various facilities you’ll need to eke out an existence in Dite, as well as secure the defences you’ll need when wanderers inevitably attack.

Many of those mechanics extend to Metal Gear Survive’s multiplayer, which is a mix of salvage and defence missions. Multiplayer can be a pretty enjoyable time sink; just make sure you’re playing with friends. When playing quick matches, which saddles you with a bunch of ‘randoms’, I frequently encountered players who had little interest in working amicably and felt no compunction when monopolising sparse resources meant for the entire team. It’ll ruin what can otherwise be quite an enjoyable experience. If multiplayer isn’t your thing but the campaign isn’t quite enough for you, there is a ‘new game plus’ option, if you can call it that. Basically, you get to keep playing at the conclusion of the story. That’s arguably when Metal Gear Survive really begins, with the previous chapters being a sort of lengthy tutorial.

In fact, you only unlock additional character classes and skills, as well as most of the buildings, at the conclusion of the story. Having spent some time in Metal Gear Survive after finishing the campaign, I can comfortably say that it’s not bad. I’m not sure if “not bad” is a seal of approval, but there you go.

I should point out that if multiplayer isn’t your thing because you don’t have a solid internet connection, then avoid Metal Gear Survive altogether. The moment your internet fails you, the game will send you careening back to the main menu. That’s right, Metal Gear Survive requires a persistent internet connection. It’s a disappointment, sure, but it’s not unexpected when you’re dealing with the callous bigwigs over at Konami. Did I mention that you need to pay, like with real money, for extra save slots! That’s not just unacceptable; it’s absurd and blatantly anti-consumer. If you can get past that, then Metal Gear Survive may just be for you. It’s not a good Metal Gear game, that’s for sure, but like I said before, it’s a pretty good survival game. It looks great, too, courtesy of the remarkable Fox Engine, allowing for some truly captivating vistas and, at times, a gripping atmosphere. Just don’t expect the story to add anything to it. It’s a zombie game after all. 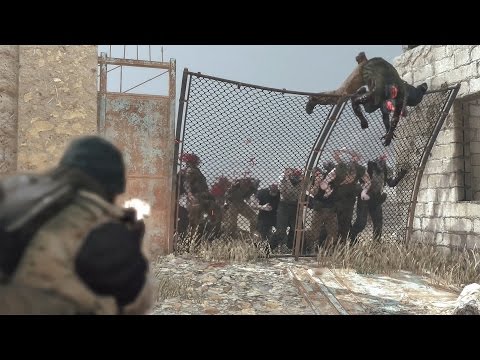