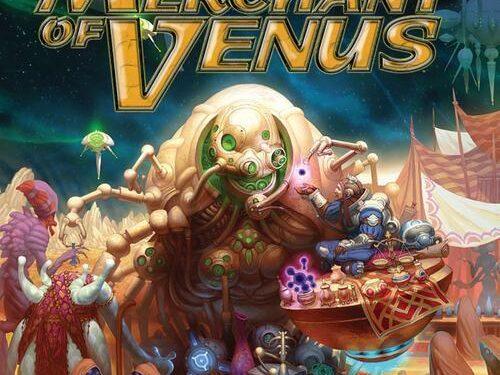 The original Merchant of Venus was published in 1988 by Avalon Hill and built such a following over the decades that people started creating print-and-play sets, as the original game was no longer available. 22 years later Fantasy Flight Games (with the help of Stronghold Games) recreated the game using their signature quality and a revamped play style, but with everything required to play the game as originally conceived. Though the classic game is brilliant in its own right, this review is about the revamped system.

Basic Setup in Merchant of Venus:

The massive board is placed in the middle of a large table. The 3 types of tokens for each race is placed down the left side and the 3 decks of cards (rewards, missions and events) are shuffled and placed on the right. Each player gets start-up money, their ship dashboard, pick a pilot and their first mission. And off you go.

On your turn you declare your heading (following the dotted lines on the board between the areas) and roll the dice. Then you have the option of specifying navigation or boost before setting off counting spaces. How you move and which spaces you skip depends on your navigation choice, drives you’ve purchased and other modifications to your ship. If you decide to end your move on the surface of a planet or at a space station you can trade with the race that lives there. If you are the first player to stop there you discover the identity of the race occupying this specific place. If a traveller is waiting for you there you have the option to pick them up for the promise of payment. Trading in Merchant of Venus:

The goal of the game is to have more money than the other players after 30 turns. Each race sells a unique good and buys the goods from 4 other races, the prices of which fluctuate depending on the state of the market when you sell, just like real merchandise. They also sell a specific ship upgrade that can’t be bought anywhere else, some more comical than useful. These upgrades can have major effects on how you play and may completely change your strategy. Other items are also for sale such as propulsion drives that let you travel faster or extra cargo bays. When a race is first discovered, they will give a certain amount of credit to the player that discovered them, allowing even a player that’s out of luck to make a comeback.

This is an additional way of gaining enough money to win the game. Almost everything you do in the game is associated with Fame points. These are worth 10 credits each at the end of the game, unless you have the fluffy dice which doubles the value and provides a random bonus amount. When your Fame goes into the negative you become Imfamous. If you’re still imfamous by the end of the game you are disqualified and can’t even count up your score, let alone attempt a win. 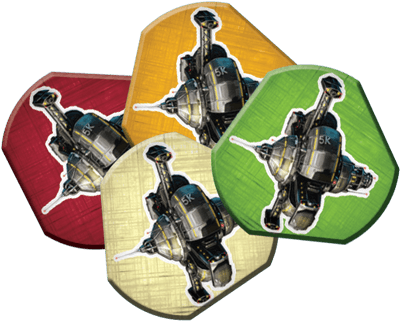 It bares repeating that Merchant of Venus comes with all the components and a complete ruleset to play the original game (even the name on the rulebook is printed in the original font). This is essentially two games in one. The re-imagined ruleset plays smoothly and reasonably quickly with little player downtime, but the nature of this type of game makes it a longer session. 4 – 6 hours in my experience. 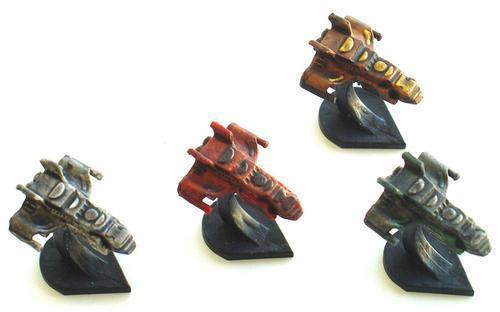 Components: 4/5. Most of the game uses large card stock tokens that are easy to understand and easy to stack when needed, though we recommend purchasing a few tackle boxes to keep them organised because there’s hundreds of them.
Gameplay: 4/5. Once you get to grips with the movement system it plays very quickly and smoothly, especially if players spend their downtime planning their next move.
Complexity vs Depth: 4/5. This is a complex game by nature, though anyone with a little business sense should feel right at home. “Buy here, sell there and there. Now you just have to make it there without any major incidents”.
Theme: 4/5. Stemming from the original game’s wacky sense of humour each race has a blurb that will at least make you smile. The modifications you can equip can range from fluffy dice and slightly fancy spoilers to proper wave emitters in the proper science fiction sense.
Overall: 4/5. Merchant of Venus is a very good trading board game that keeps things interesting by throwing random events in your path, but nothing that can’t be overcome by proper planning. Market fluctuations are simulated in a simple but effective manner and the small bits of humour keeps the game light-hearted for the extended period of concentration required. Luckily, Merchant of Venus is designed in a way that allows players to take a break and continue later without losing track of their progress.

Available at Fanaticus Hobbies and Games