Mera, Queen of Atlantis #4 decides to weave a narrative of war, politics and love in an issue akin to an episode of Game of Thrones. Pitting Mera and Orm against the might of an Octodon, in a quest to eventually bring the King of Xebel on side in the war for Atlantis, Abnett has created a story fight for the royalty it holds. 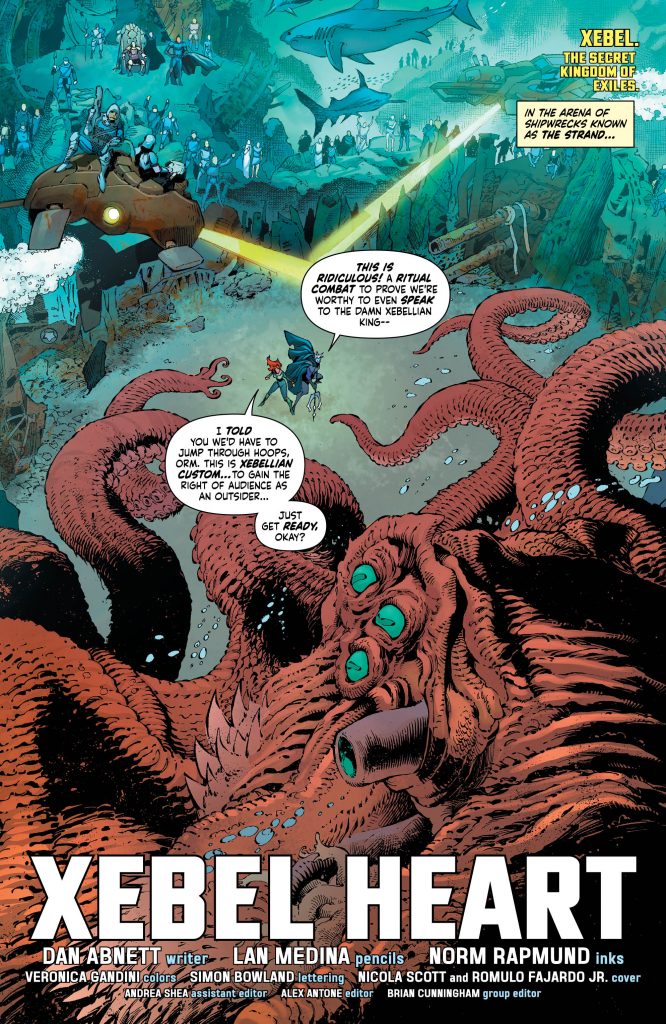 Whilst the Ocean Master and the future Queen of Atlantis fight with fists and words to turn the tide of war in their favour, many other ulterior motives are at play in the background of this tale. Orm’s struggle between the surface world and his place in the depths as a monarch is evident throughout Mera, Queen of Atlantis #4 and indeed this series, with snapshots of his life on the ground showcasing how at home he really is above the waves. The pullback to the ocean, however, has never been stronger when King Nereus showcases his strength and power; as a jealous Orm looks on. Elsewhere in Xebel, Mera is reunited with her Grandmother, a woman who has clearly become slyer with age.

With many political motives at play here, between Nereus and Orm’s search for power, Mera’s quest for peace and the shocking reveal of her Grandmother’s ambition for domination and revenge, the under-sea world that DC has constructed has never been more real and vibrant. If this title is about anything, however, it is family. Mera’s love for her future husband is always apparent, but Ocean Master’s family also plays a large part in this issue, much like the last. Seeing how his family is coping without him has forced his half-sister back into the waters, despite herself being happier on dry earth. Whoever she was captured by upon arrival though is unfortunately left unexplained, but I imagine it will play a huge part in the consequential chapter. Overall, Mera, Queen of Atlantis #4 hit the height of what the title could be. Playing with the political intrigue that can be captured with a series that involved royal bloodlines of this nature, Abnett’s work is on full display here and, dare I say it, with some of his best work. The art provided by Rapmund and Medina cannot be short of phenomenal for writing such as this and it does not fail to deliver. A crisp, fresh and invigorating piece of work throughout the book, these two have shown that the bottom of the ocean does not have to be colourless, bland and uninteresting.