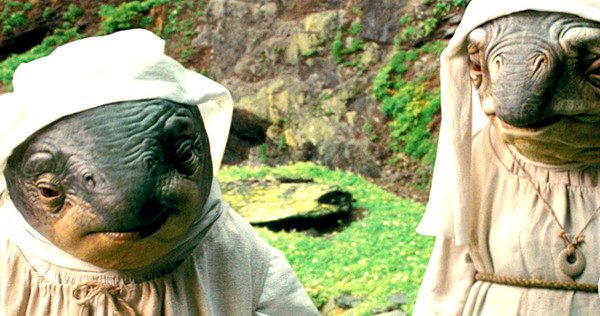 ?Also Part 3 of The Last Jedi cover: The alien nun "Caretakers" of the Jedi temple on Ahch-To: https://t.co/JIq7r6FVZP pic.twitter.com/mqTIKeHjiV

The Last Jedi: Meet the porgs and 'The Caretakers' from Luke Skywalker's island https://t.co/7uFAywZ8BQ

It seems that “The Caretakers” won’t be CGI-animated characters like the Porgs, but rather have actors in costume. Rian Johnson commented on the new creatures:

“They’re kind of these sort of fish-bird type aliens who live on the island. They’ve been there for thousands of years, and they essentially keep up the structures on the island. They’re all female, and I wanted them to feel like a remote sort of little nunnery. Neal Scanlan’s crew designed them, and costume designer Michael Kaplan made these working clothes that also reflected sort of a nun-like, spartan sort of existence.”

“You get the sense they did at some point or maybe they occasionally do [return to the sea,] but when we see them, they’re land creatures. They’re these big matronly creatures, but they have these little skinny little bird feet. They were really fun to work with on set.”

Rian Johnson revealing that he created these creatures because he didn’t want Luke Skywalker to be fully alone on this planet:

“If you go to Skellig at the right time of year, it’s just covered in puffins, and they’re the most adorable things in the world. So when I was first scouting there, I saw these guys, and I was like, oh, these are part of the island. And so the Porgs are in that realm.”