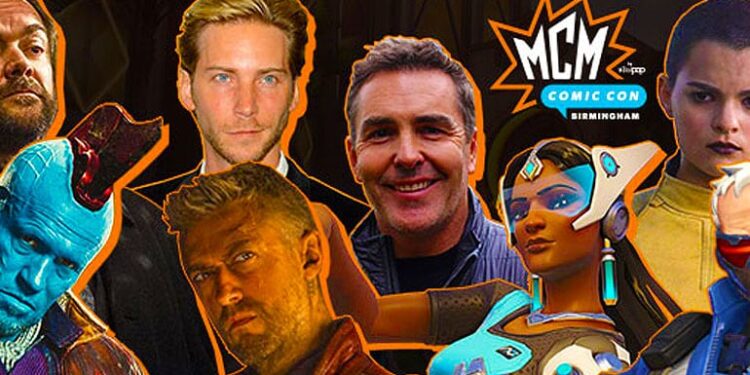 Deadpool leans back in his chair looking like he couldn’t give a damn. On the table in front of him sits his portable radio, which is aptly playing Juice Newton’s Angel of the Morning.

Well, his movie kind of started that way too, so if there’s going to be any proper beginning to Comic Con for me then it may as well be that. Meanwhile, a line-up of Star Wars Imperial and Rebellion troops stand at attention at the main entrance, greeting the thousands of people who are slowly filing through the doors. As usual, once people are inside they start their convention experience by getting a feel for the layout of the stalls, booths, stages, signing tables and more. Deadpool looks unimpressed, but then he’s also the sort of guy who would give Darth Vader a wedgie. He may get his chance later. It doesn’t take long for the halls to fill up, and there’s an initial type of chaos going on. This time the Birmingham convention is being held in a slightly smaller area… and apparently, according to one stall vendor, the event’s tickets are completely sold out. The combination of that many people entering all at once and the slightly smaller floor space (even though it’s still huge) cause a couple of early logjams in the aisles. Thankfully though, it doesn’t take long for the people to start spreading out.

Before long, many of the stalls and businesses are doing great business, with comic books, T-shirts, toys and games being picked up by customers. One of the first which stands out is the Genki Gear T-shirt stall, which offers up bizarre cartoonish visuals featuring characters like the Demonic Cupcake, the Sandwich of Existential Dread, a horse with delusions of being a unicorn, and the Tiny Tofu Terror. They’re a cross between manga art and Gary Larson’s Far Side surreal comedy, and seeing a tofu cube vowing world domination is hilarious.

Sculptor Jon Berry from Claypolygon is busy working on his creation – Supreme Leader Snoke – and his attention to detail is catching the attention (and appreciation) of everyone around him. Nearby, Chewbacca and Han Solo walk by and Chewie intimidates everyone with his size and a few growls… although he’s happy to pose for photos. Meanwhile, a pair of Jedi knights engage in a lightsabre duel near the steampunk area. It’s a strange image, but a steampunk Boba Fett is in the area too, which reminds everyone that the only boundaries are those of people’s imaginations. While I’m busy directing a father and son to the robot wars area (where they’re hoping to see the mechanical behemoths rip each other apart in the gladiatorial arena), I get ambushed by a group of tiny Jawas. They hop around me, picking at the shiny buttons on my jacket and are no doubt wondering whether I’d fetch a decent price if they sold me off to some moisture farmers. One of them yells “Utini!” and seems convinced that I’m of value, but thankfully they’re chased away by R2-D2, who beeps at them rather rudely. I’m grateful for the save, and to my surprise R2 suddenly beeps the Mos Eisley Cantina tune in his own robotic way. Based on that, I figure it’s time for a drink and a bite to eat.

The food stalls are packed with customers, and the food court has so many people using it that all the tables and chairs are occupied. With no other option, some are sitting on the floor. At a nearby counter, I spot three escapees from Arkham Asylum still in their orange jumpsuits, while Lego Batman seems oblivious to their presence and more focused on his cup of coffee. Bizarrely, Donald Trump and Kim Jong-un walk past, hand-in-hand, so I’m guessing that they’re a couple now. The food must be really good if it can create that kind of reaction, so I get myself a pie and a coffee. Off to one side, some people are starting to complain about the mystery gift boxes they’ve bought. I can understand that, since something similar has been a bit of a personal crusade for me. I’ve argued in the past that “blind bag” toys sold in shops are the equivalent of loot boxes in gaming. The concept of not knowing what you’re buying is a dodgy one to begin with, and odds are that almost nobody will get the impressive-looking items displayed as samples of what a person may – MAY – find in their boxes. Instead, they’ll get the same lousy items again and again. It’s frustrating, a bit of a con against those who don’t know better, and while it may not quite be gambling it’s still a gamble that customers will walk away with anything good. From the complaints going around, the only thing I can personally suggest is that if you ever see anything like these for sale at a convention is to not buy one.

Instead, I bought a Pikachu hat, a pack of Red Vines, a copy of Marvel Zombies vs. Army Of Darkness, and a pair of furry ears, which were all intentional. See, I know what I bought and I got what I wanted. Let that be a lesson to everyone… although I still feel sorry for the people who wasted their money on the boxes and got a load of junk instead. That’s just wrong.

Getting back to the fun though, the cosplayers are definitely out in force despite the cold weather and snow beginning to fall outside. Anime and game characters are well represented, their popularity constantly on the rise. In terms of comic book heroes, there are the usual suspects: several Harley Quinns, a handful of Jokers, and quite a few Thors. Tellingly, I spot four Silent Bob/Bluntman/Kevin Smiths in the area all at the same time. I chat with a lady dressed as Silent Bob, and we share our thoughts on how good that is to see, after Kevin Smith’s real-life heart attack recently. The outpouring of love and respect for him from the fan community is wonderful to see. The signing panels are busy, with celebrities and stars meeting their fans. One of the biggest cheers of the day is for fan favourite Mark Sheppard, who’s picked up quite the fan base from his time on the show Supernatural, in which he played Crowley – the King of Hell. Given that the show has lasted thirteen seasons – a rarity for an American show as it is – and is the longest-running American live-action fantasy TV series, it’s fair to say that it has some fans. Sheppard, as expected, is greeted warmly by them and responds in kind. Later, Guardians of the Galaxy’s Michael Rooker and Sean Gunn will take to the stage but, for now, all eyes are on Sheppard.

It’s hard to know what Judge Dredd makes of all of this as he surveys the scene with his usual grim determination. Thankfully, nobody’s breaking the law – although I wonder what he’d make of those loot boxes. It’s a good thing he’s not dispensing justice because outside I get into a conversation with someone dressed as another crime fighter. The original crime-fighter, for all intents and purposes: The Shadow – a character who knows that the weed of crime bears bitter fruit. We chat briefly about the impact The Shadow has had on popular culture, and how Batman and many other superheroes wouldn’t even exist if it weren’t for the Shadow coming beforehand. We join forces calling out the Shadow’s catchphrase: “Who knows what evil lurks in the hearts of men? The Shadow knows!” We both laugh that ominous laugh, before he mysteriously disappears into the shadows of Hall 4. I could swear that he clouded my mind in some way, because I didn’t spot him in the crowds again after that; Instead, I see two people cosplaying genuine iconic heroes of sci-fi: Star Trek’s Captain Picard and Aliens’ Private Vasquez. Both are impressive, although one of them looks like they’re ready to rock with their M56 Smartgun while the other is ready to have some tea, earl grey, hot. Someone wearing a giant mecha Hulkbuster suit of armour enters the hall, towering over everybody and causing quite a stir, while the Transformer known as Soundwave (complete with working flatscreen monitor chest) has the advantage when it comes to speed and manoeuvrability.

As the day goes on and the snow continues to fall outside, everyone inside Comic Con is still warm and toasty. Video gamers and board gamers are all busy trying out the products on display and are enjoying themselves, while independent and mainstream comic book creators show off their work, chat with fans and sign original artwork. In the background, there’s the sound of robots destroying each other and people cheering their favourite celebrities, and as the events of the day draw to a close I wave goodbye to Deadpool – although it’s a different Deadpool. This one has rabbit ears and a tail. He looks back at me with confusion, but then nods as if we’re in on the same joke. As usual, Comic Con was an exhibition of chaotic brilliance, a place for people of all ages and all types of fans. It didn’t cater to any one group, it made everyone feel welcome by offering something for everyone. Comic Con Africa is soon approaching, and it has a lot to do if it wants to live up to the expectations of the local fans in South Africa. Obviously, every country and convention has their own way of doing things, but if it can achieve this level of experience then it’ll be an overwhelming success.

Special thanks to the organisers and staff of MCM Comic Con Birmingham for their tireless efforts and for the great experience, to all the wonderful people who attended, and to all the great cosplayers who posed for photos