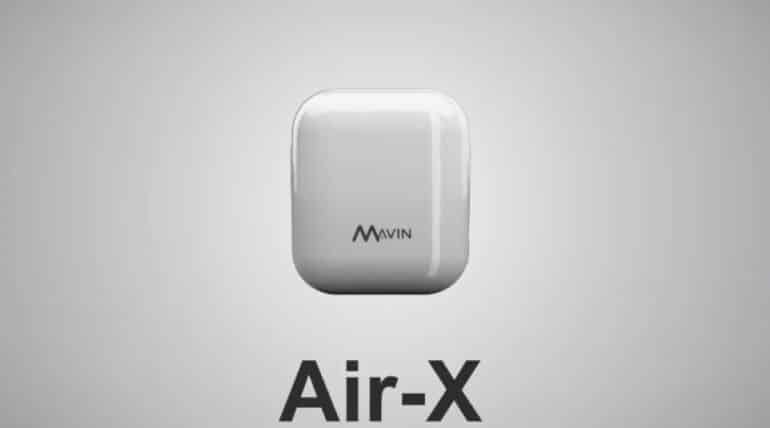 There have been countless new brands launching their version of earbuds ever since Apple dropped their Airpods a few years back. In addition to this, there has also been a flurry of activity across the broader wireless device range, for which we’ve already reviewed quite a number of earphones falling into this category over the past few months – K Sport Wireless Headphones, iFrogz Flex Arc, Coda Wireless Headphones, Coda Wireless Earbuds, Impulse Duo and Aurora. While the market is certainly being flooded with some sub-standard wireless products, there are a few that easily stand out from the crowd, even matching some of the more mainstream units by leading OEMs, although without the caveat of an exorbitant price to match. Having recently impressed the crowds at CES 2019 in Las Vegas with their recently launched earbuds, Mavin are changing the game with the Air-X. How does it compare, then, to the Airpods? 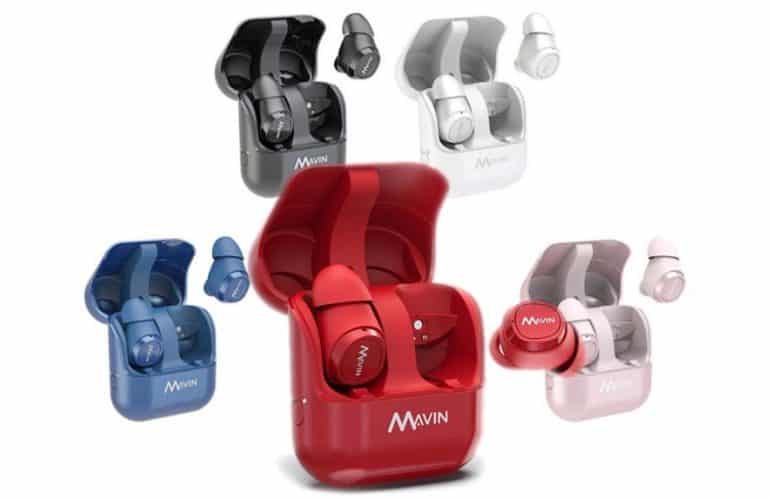 There are two parts to the design of the Air-X, the earbuds themselves, as well as the case in which it is enclosed. Starting with the latter, a glossy, plastic casing in various colours – red (Wild Fire), black (Paino Black), white (Peaceful Minds), blue (Ocean Blue) and pink (Sakura Pink). The case has a slightly elongated square shape, which is small enough to comfortably fit in your pocket. The edges are rounded, which means you won’t be able to place it upright when in use, although, I wouldn’t suggest that it was always necessary. The case flips open to reveal the earbuds nested neatly inside. The left and right earbuds are kept in position by means of magnets, which means they won’t fall out when you do open the lid. There’s also a noticeable click when in position, providing peace of mind that they’re securely in place. The magnets also assist in positioning the earbuds onto the induction pads for wireless charging. The left-hand side includes a pairing button, as well as two indicator LEDs, which flash blue and red depending on the status. The micro-USB port is positioned on the right-hand side, which is used to charge the actual case, which, if you would’ve noted by now, doubles as a charging dock. In terms of overall size, the case is a fair bit larger than that of the Airpods, but not significantly heavier.

As for the earbuds themselves, they’re more conventional in shape and size. The units take up far less real estate than the Airpods, which makes them ideal for various activities, including gym, without having to worry that they may be caught on anything externally while being active. During one of my gym sessions, one of the earbuds managed to fall out of my ear with the default ear tips. Mavin includes three choices of ear tips of various sizes, which meant that I could easily switch it out to a slightly larger size, which gave the units a snugger fit, as well as a better seal for the audio. This meant that I didn’t have any mishaps again, in this regard.

The earbuds have large button on the outer ends on both ear pieces, which allows you to control the playback and volumes, accordingly. There’s also a single LED on the top side, which provides blue and red lights to indicate charging, pairing and the likes. The back end houses the circular magnet, used to connect to the case, as mentioned earlier, with two induction connectors below the magnet to complete the charging process. There aren’t any other ports available for charging, which means that it done solely be means of the case. The Air-X earbuds are very light and compact, which fit snugly in your ear for optimum use in any conditions. 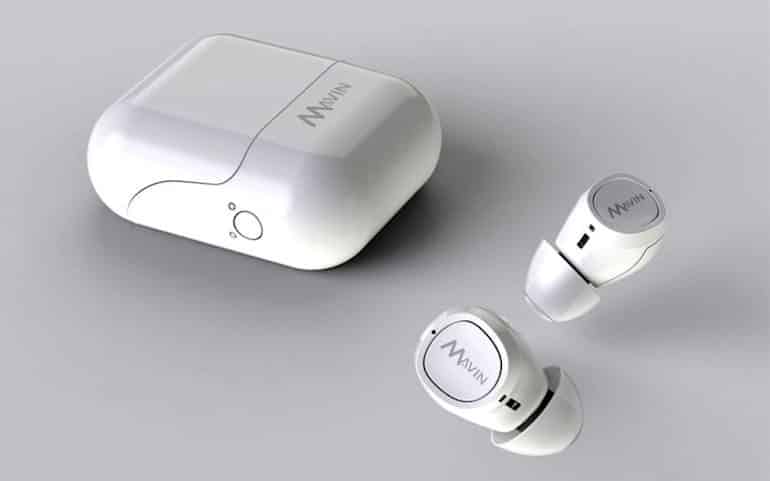 What I loved about the setup process is that it’s an indication as to how the device will operate on a daily basis. The whole process is extremely efficient, almost completed with a single click of a button. As already mentioned previously, the left-hand side button on the case plays quite a significant role the entire process of the Air-X. To setup the earbuds, simply open the case lid, then press and hold the button for two to three seconds. You’ll then notice the earbuds start flashing blue and red to indicate that they’re available for pairing. On your smartphone, under the Bluetooth settings, you’ll see two new devices available for pairing. To connect the unit, choose to pair with the left earbud. Once it connects, it will automatically request to be paired to the right earbud, which will then sync itself to the left. The pairing process is now complete and the Air-X is ready to be used.

The earbuds are automatically connected to your smartphone whenever it’s lifted from its casing. What’s great about the setup as well is that once they’re placed back into the case, the playback from the smartphone then pauses, with the earbuds going into standby mode. Furthermore, when you take them back out again, while the native music app is still running, it will once again start playing from where you left off. The process of automatically connecting to your device whenever you take the units out its case is quite efficient and one of the stand out features about the Air-X.

The LEDs also provide some useful information as well, once paired to your device. The right-hand side LED will flash blue when the earbuds are charging and red when the case itself is charging. When clicking the button, the left-hand side LED will flash red to indicate the battery level of the case – once for low battery, twice for 30%, thrice for 60% and four times for anything higher than 80%. 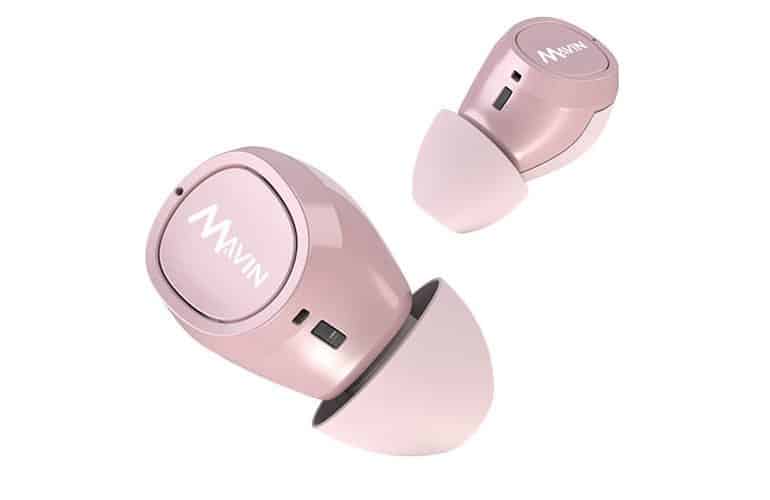 The Air-X has the looks and feature set on lock down, and the performances for the unit isn’t bad either. The unit features Bluetooth 5.0 support, which provides some of the latest capabilities for wireless connectivity. One of the more impressive of these is its 30m range. That’s not only impressive for any type of Bluetooth device, but insane on a pair of wireless earbuds. With most devices featured in the same category only producing at best 10m of range, this is quite a feat. It means that you can pretty much cover all areas of your home – most average homes – with a single connection point. What’s good about the range is that the quality doesn’t diminish over these distances, with no real distortion or disruption even above the 25m mark. The Bluetooth 5.0 support also means that you’ll get device notifications from the unit directly on your smartphone. Notifications include pairing information, as well as battery levels on each of the earbuds.

The battery life of the Air-X is a solid 10 hours of continuous play. This is about the average battery life for a pair of wireless earphones or headphones. Where the Air-X stands out is with the addition of the charging case, which takes the battery life and adds an additional 40 hours, taking it to 50 overall from a single charge of the case. The unit also carries an IPX5 rating, which isn’t waterproof, but will allow for resistance against splashes and light rain, but won’t be suitable for swimming and the likes.

In terms of audio quality, the Air-X delivers reasonable sound. There’s a decent amount of presence in the various frequencies, including low, middle and highs. In terms of bass, the quality is good, but doesn’t provide the greatest deep bass, which means that the EQ will need some adjusting to bring out the best quality across the board. At higher volumes, the treble levels are quite high, which need to be turned out to avoid piercing your ears at times. Once it’s all setup, however, you can get some really good sound from the Air-X, but you still won’t be able to compare them to other flagship devices.

What’s interesting about the Air-X is that it has a built-in Qualcomm AptX processor in each earbud, which means that there’s a lot of room to improve the overall quality with the ‘TrueWireless Stereo Plus’ support on all Qualcomm-equipped (Snapdragon 845 and higher) smartphones. What this provides is better audio quality, as the sound is processed individually within each earbud. I conducted a few tests on a loan Qualcomm phone and almost immediately noticed quite a big difference without needing to adjust any settings beforehand.

In addition to the AptX capabilities, the Air-X also features latest cVc noise reduction and is equipped with a SNR MEMS microphone in order to provide clearer voice quality on calls. The call quality on the earbuds itself is good, being able to clearly make out words even in louder environments. On the other side of the call, the microphone also provides good quality, with the unit offering decent background noise suppression. Tested in a loud environment, I was still able to hear the person speak as the noise in the background is reduced and only increases in volume once they’ve stopped talking. The noise isn’t completely reduced, but you’re still able to clearly hear the person speaking. In much louder environments like gym or the club, they don’t hold up as well, although you may still be able to have a conversation, although with a few more repeating of sentences. 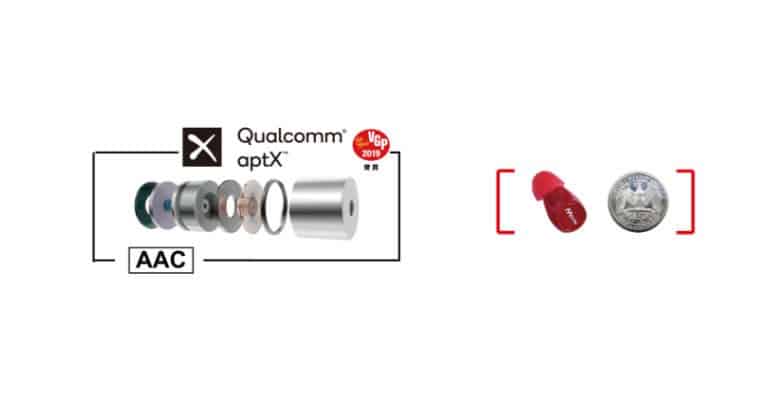 The Mavin Air-X is a very well-rounded audio device, which delivers more features and capabilities than most other wireless options within the same category. From the range of connectivity to the suite of Bluetooth 5.0 features, as well as the battery life and additional support of the portable case, there’s very little additional requirements you’ll have, apart from audio quality. The quality itself needs some fine-tuning for many smartphones, but comes to life for any of the latest Qualcomm-equipped smartphones. At a price of $139 (available on Amazon), it would have been great if the sound features could have been more widespread, but the price is still justified overall. The Air-X takes the game to a new level for wireless audio devices, while at the same time making the leading OEMs stand up and notice a new entry to the battle for supremacy.

The Mavin Air-X wireless earbuds have a great feature-set and battery life, making listening to music on the go as efficient as it should be.