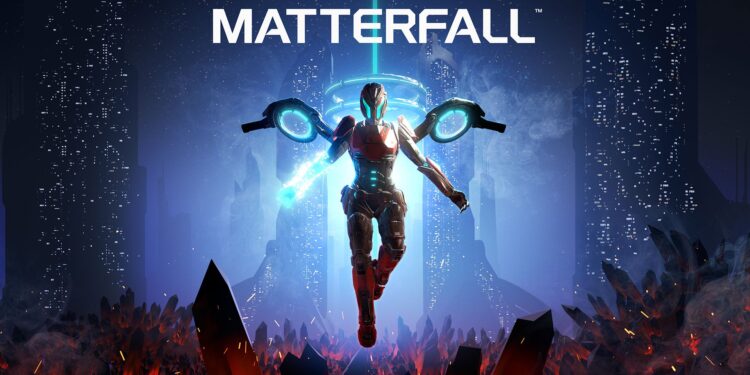 Housemarque has established itself as the premier developer when it comes to particle effect heavy shooters. Now, the studio known for their intense bullet dodging games has taken on the 2D platforming genre. Is Matterfall a worthy addition to the developer’s masterfully crafted catalogue of games and does it evoke the same nostalgia? Although the story in Matterfall is mostly an excuse for having player’s face-off against waves of enemies and brightly coloured bullets, it does give some background on why you are killing hordes of robots and saving helpless civilians. Player’s take on the role of a female soldier equipped with powerful futuristic armour, which reminded me of another orange armour clad female hero from days gone by. Your mission is to shoot, kill and destroy the robots that have been driven insane by an alien substance… oh, and to save some civilians along the way. While the plot might not be much more than an afterthought, it’s the games unique mechanics that set it apart from other 2D side-scrolling platformers.

The first and most important ability players will need to master if they want to survive Matterfall’s onslaught of bullets is the Dash. Dashing is not only a quick and convenient way of dodging bullets but allows players to stun certain enemies (which makes them vulnerable to attack) and pass through special barriers. It does take a while to get used to the mechanic but once it clicks you’ll be stunning and dodging enemies like you’ve been doing it your whole life. The second important ability players have access to is the Matter beam, which allows players to create platforms, make bombs go boom and save humans who find themselves caught in crystallized prisons. As with the dash mechanic, getting to grips with the Matter beam does take a few tries. The gameplay itself is fast paced and as chaotic as one would expect from a Housemarque developed game and forces players to continually keep moving if they want to stand a chance of surviving. Players will also not be able to continually rely on their Dash ability as this has a cooldown which forces you to prioritize which enemies to stun first and which to leave. While dodging enemies is a great way to survive an even better way is to kill them. The method of achieving this is by using your primary blaster, which is controlled with the right stick. In addition to the primary blaster, players are also able to unlock 12 slottable augmentations, which includes 4 secondary weapons which can be equipped three at a time. These are unlocked by rescuing the previously mentioned helpless civilians. Each augmentation helps to customise your character to suit your playstyle, be it running and gunning or causing massive area-of-effect damage. Even though the game gives you enough tools to beat back the ever increasing waves of enemies, it’s by no means an easy game. Housemarque has, however, found the sweet spot between being overly difficult or mind-numbingly easy. Visually, Matterfall is a feast for the eyes with enemies exploding into thousands of beautiful voxels when finding themselves on the wrong side of your blaster. The thumping soundtrack and bright colours quickly had me finding my rhythm as I jumped, shot and dashed my way through each level.

I did have a few issues with the game, the main one being that once you’ve completed it there isn’t much more to do. Sure, you can try and beat your times and improve your high score, but many will find it hard to return to the game once they have completed it. Another issue is that, while the controls are as smooth as butter, the mapping of certain commands, such as jump being mapped to R1, can take some getting used to. These are minor gripes in an otherwise great experience.

Matterfall might not the best game developer Housemarque has released, but it is still a worthy addition to their catalogue. While the difficulty might be off putting to some, those that stick with it will quickly discover a fast-paced, visually stunning game that can be just as rewarding as it can be punishing. 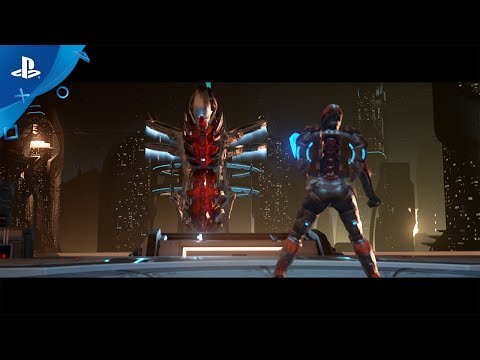