Masquerada: Songs and Shadows Review – A Beautiful Yet Flawed Experience

Most RPGs task players with surviving a post-apocalyptic world, conversing with aliens or fighting side by side with elves and dwarves. These games rely on very familiar sci-fi, fantasy or post-apocalyptic tropes. Not Masquerada: Songs and Shadows, a refreshing RPG that take’s place in a world or universe that we as players have yet to explore. At first glance, Masquerada might give the impression that it takes place somewhere in 16th century Venice, as each character is draped in Carnival inspired garb complete with elaborate masks. It doesn’t take long to realise that there is far more to the game’s Venetian-inspired look than first meets the eye.

Players take on the role of Cicero Gavar, a dashing young man who is deeply troubled by his past. Cicero is called back to the Citte of Ombre from exile and upon his return finds it in the midst of a civil war. Both sides are after Mascherines, masks that give its wearer the ability to command one of the four elements (think Avatar: The Last Airbender). The problem is that, when the wearer of a Mascherine perishes, his mascherine disappears with him. This, of course, means that these precious items are becoming scarcer as the war continues. Cicero is asked to take up the mantle of Inspettore (Inspector General) in order to locate one of his former acquaintances, Razitof Azrus. As with most RPGs, things are not always as they seem as Cicero quickly discovers that a greater danger lies on the horizon. Along the way, Cicero picks up allies that not only aid him in his investigation but become close friends. While the narrative might sound like a cut-and-paste version of so many games out there, it’s the amount of lore-building that developer Witching Hour has put into the game that makes it so unique. I’ll be the first to admit that all the jargon and technical terms that form part of the world’s lore did confuse the heck out of me, but as the story progressed, and I found more of the codexes strew across the world, I began to slowly unravel and understand the world that the developer had crafted.

Adding to the confusion, at times there is a lot of politics in the game. Maquerada isn’t a game for those who want to pound in heads with large oversized weapons but rather for those that love being enveloped in politics, intrigue, and well-developed characters. Part of the game’s charm is due to the excellent voice cast that includes the talents of among others, Matthew Mercer, Dave Fennoy, Felicia Day, Rick D. Wasserman and Catherine Taber. Each voice actor really brings emotion and character to each of the game’s pawns. The best part is that most of the game uses voice overs with only the afore mentioned codexes needing players to don their reading glasses. For those hankering for some good old sword swinging, the game does offer a real-time combat system that enables players to pause should things become too overwhelming, which it does at times. Combat revolves around Mascherine powers (elemental attacks) and stances. Depending on which element players choose to specialize in, they will have access to various abilities based on that element. These abilities tend to fall into the following categories: crowd control, AoE damage, taunting and summons, with each able to be upgraded using XP.

Along with the different abilities, players also have access to different combat stances which affect how your character attacks (fast, slow or ranged). These stances can be switched on the fly during combat. Combat can get quite frantic at times and devolve into randomly smashing buttons until your foe dies. While players are able to setup commands for their companions to follow during combat, I found that they tended to ignore these most of the time. And although you can switch control between your main character and your companions, too often did I find one of them venturing too close to an enemy resulting in their death. It can be frustrating when you worked so hard on a strategy only for your companions to decide to ignore you and storm into battle swords flailing. 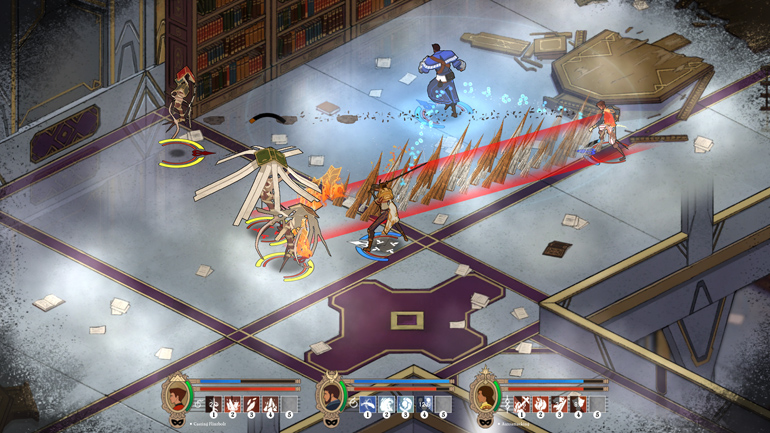 Along with the great voice cast, Masquerada is also a beautiful game to behold. With its cell-shaded graphic novel-like visuals, it feels like you are playing parts of a story book. A few times I stopped playing in order to gawk at the game’s visuals. In a time when most game’s colour pallets range from brown to an ever browner brown, it’s refreshing to experience a game with such a vivid colour pallet.

Unfortunately, some might find Masquerada’s linear gameplay a bit off putting. With most games today offering players branching story paths, it can be quite jarring to play a game that is so linear. Players are literally tasked with running from point A to point B with bits of combat and conversation sprinkled in-between for good measure. I do understand that keeping the game more linear meant that the narrative could be deeper and more focused. It’s just that Witching Hour put so much effort into building the game’s lore that only being able to experience a small part of the world becomes frustrating. Flaws aside, Masquerada: Songs and Shadows weaves an engrossing narrative in a unique world filled with fascinating lore. Sadly, it is let down by linear gameplay and AI that not always listens to your commands. It’s a shame really as I found myself wanting to travel to some of the places that were mentioned and fight some of the interesting monsters I know was just waiting for me over the horizon.