Home > Books > Comic Books > Marvel’s Secret Empire Takes Heat, But Those Against It Are Being Burned

Marvel’s Secret Empire Takes Heat, But Those Against It Are Being Burned

Marvel Comics and writer Nick Spencer have faced a sudden barrage of abuse at the hands of the fans over the controversial new Secret Empire storyline. The story arc, which features Captain America being revealed as the head of Hydra and betraying America’s trust, has led to instant controversy and apparently become a PR nightmare.

“I knew the Nazis were rotten, from the minute I set eyes on them. They were suppressing – then murdering – the people of Europe, weren’t they? They had spies here, didn’t they?” When the plot was first announced, fans were shocked but waited patiently to see how it played out. When comic book stores were offered promotional Hydra T-shirts for staff members to wear, some were outraged and claimed that it was the equivalent of asking them to dress like Nazis. When it was leaked that the now-fascist Captain America would wield Mjolnir, Thor’s legendary hammer, people were offended that it meant Marvel was promoting a Nazi agenda, and that it was an insult to Marvel’s legendary founders and creators.

One fan who read that page allegedly screamed at the sight, such was their horror. Others took to Twitter, urging people either to boycott the comic and stores which sell it, or for the writer of the series to kill himself. Meanwhile, some have made in-depth statements about how Marvel have become a pro-Nazi organisation, trying to portray Hydra in a more positive light by distancing them from that group.

Unfortunately, what’s missing here from those outraged fans is a little perspective.

Of course, Hydra are Nazis, or at least exist as a Nazi sub-group. Technically, they may be older and even more evil than those whose twisted ideology resulted in the wholesale slaughter of millions in countries across the globe. But basically, yes, they’re Nazis. Created by Stan Lee and Jack Kirby, they’ve always served as a symbol of fascism, prejudice and hatred. They’ve never been anything but Nazis. The latest Secret Empire series does nothing to alter that concept. If anything, it reinforces it by making them even eviler.

As seen in the latest television series Agents of SHIELD, the titular heroes have become a part of an artificial world where Hydra rules everything, similar to what the comics are doing. Nothing about this society is good, with propaganda posters everywhere and people living in constant fear because their personal liberties have been stripped away. Innocent people are rounded up, tortured and brainwashed all for the crime of being different, or speaking out against fascism. It’s an evil world and one which no sane person could want to live in.

The issue of Hydra’s origins was addressed in a scene where a young student asks Coulson about stories of how they were an organisation of Nazis. “Don’t say that!” Coulson chides him and explains that such talk is merely fake news from the media which has too much freedom. Coulson doesn’t really believe that – he knows the truth – but he’s saying it because he’s scared, and scared people do what their oppressors tell them to do. Jemma Simmons later confirms to the student though that Hydra… they’re all Nazis. Every damn one of them. While this may be happening over in the TV shows, it’s incredibly close to what’s happening in the comic books of late. Hydra isn’t being promoted as a force for good, but for fascism. They’re showing Captain America as a force for evil. And that, as distasteful as it may be to many readers, is exactly the point. It’s storytelling, making the readers feel an emotional connection to the story – even if it’s disgust – to make a point.

For more perspective, it’s worth looking back at the original Secret Empire story arc from the 1970s. In it, Captain America and the Falcon struggle to crush the Hydra splinter group known as the Secret Empire, a covert group whose leader is shrouded in mystery but seems to be in a position of political power in the US government. The identity of their leader occurs off-panel, but Captain America is shocked at who it is: presumably the President of the United States, Richard Nixon. While never stated clearly, the point was obvious:

Even our most trusted leaders aren’t above suspicion.

This made sense given the era. Nixon was at the heart of the Watergate scandal, a conspiracy which led to his resignation. America was already in a state of turmoil, given the war in Vietnam, the assassination of President Kennedy some years before, the Kent State Massacre, race riots and more. The United States of America was a country divided like never before, and conscientious objector and writer Steve Engelhart used Captain America’s story to echo his views on society at the time. For those who haven’t been keeping up with the news, the USA – and the whole world – is in a state of uncertainty. Protests against various world leaders have increased, while those same leaders have dismissed news against them as mere propaganda. In some countries, those who speak out are silenced permanently or dismissed lightly, while others prefer to keep their views to themselves so as to avoid trouble. Fascism is on the rise once again, and if left unchecked it could easily take over.

Marvel Comics have long used their comic books as a soapbox to explore various social issues. The prejudice against mutants in the X-Men has been symbolic of intolerance in various ways. Harry Osborne battled drug abuse, while Tony Stark battled alcoholism. Civil War was about the delicate balance between person security and personal freedom. And we’re seeing it again. Recently, Marvel has come under fire for being too diverse.

Now in Secret Empire, we’re witnessing a world in the Marvel Universe on the opposite end of that, one which exists if fascism takes over. Captain America, as with the President himself in the original Secret Empire storyline, is the one everyone trusts the most and has now betrayed us all. In a world where characters dying and being resurrected has become a cliché, the stakes this time understandably needed to be bigger in order to make an impact. And they are.

Some have said that it’s too much, and that may be true for them. It’s gut-wrenchingly hard to see your favourite characters going through the wringer, being pushed to breaking point. However, if you want your heroes to look better in a story, things like that need to happen. Many people cite The Empire Strikes Back as their favourite Star Wars film, despite it being the one where the good guys lose. Badly. It makes their victory in the end all the more heroic, because they’ve had to struggle to achieve their goal. 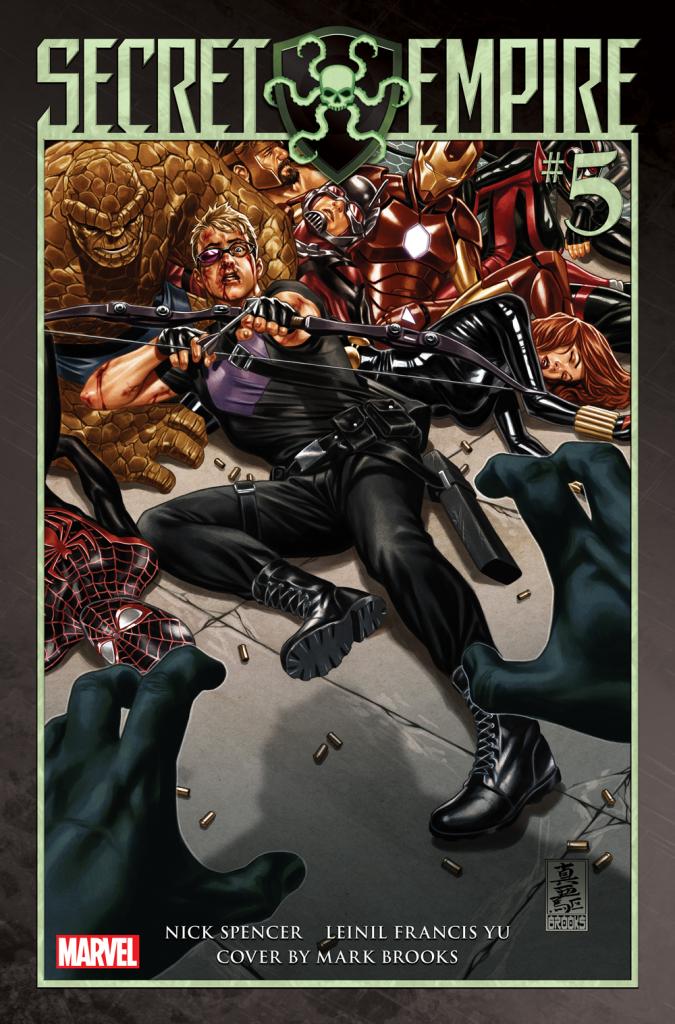 Fans have been clamouring for Marvel to return to its roots for a while now, and this story is helping to get them there. It’s socially relevant to today’s world and makes an impact on the reader, much as they’ve done with their best stories over the years. It’s also putting the characters in the worst situations and scenarios possible so that when they emerge they’ll be better than ever. Marvel fans who boycott this story arc will be missing out on the drama that makes comic books enjoyable.

For those offended by the Hydra T-shirts, it’s understandable. Hydra, after all, represents everything which is wrong in society. It’s hatred, racism, sexism, prejudice and fascism. Again, much like the Empire in Star Wars, it’s a symbol of pure evil. Interestingly, people wear Darth Vader or Stormtrooper shirts with less fuss, despite George Lucas himself having referred to Imperial forces as Nazis. However, for those offended by this piece of marketing then stores don’t have to take those T-shirts and employees don’t have to wear them. Thankfully, many of us live in a society where freedoms like that exist. In fact, it’s good that people are speaking out against wearing them, or are supporting an initiative to resist making their comic book stores appear to be pro-Hydra. While it may not be what the marketing executives at Marvel wanted, it’s good to know that people are willing to stand up against symbols of evil and even Marvel would approve of that. If people take to public forums to denounce Hydra, it’s a good thing. Nobody should want Hydra in their lives, except as villains for our heroes to defeat in the world of fiction. If people take to those forums to denounce what Marvel is doing, then they’re missing the point.

Unfortunately, forces like Hydra do exist in the real world. That isn’t the fault of the creators of Secret Empire or those behind Marvel Comics. They aren’t advocating those forces, they’re warning us about them. It’s a warning that needs to be heard and spread, not dismissed in a knee-jerk reaction because it’s hard to accept. “Stories exist to illuminate the world around us, to challenge us, to test us,” writer Nick Spencer has commented. “They are there to help us face our fears, not run from them.”

It’s time to understand what’s being said, not shoot the messenger for the warning they’re passing on. And after that, then it’s up to everyone to choose how to respond to it.