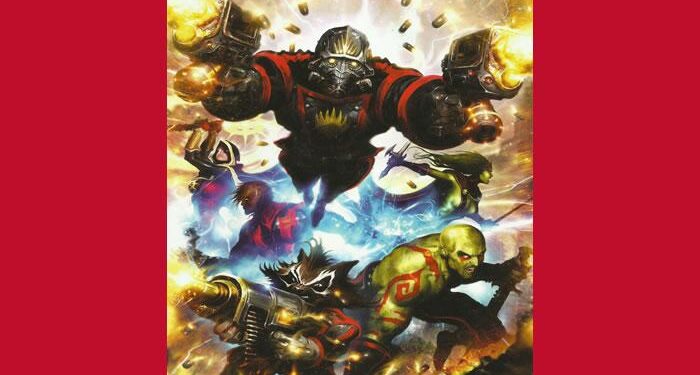 The Guardians of the Galaxy movie was a sleeper hit of 2014. Much like The LEGO Movie, no one really expected it to do so well. It was to be Marvel’s attempt at seeing how a B-(or even C-)grade team of heroes faired on the big screen. The idea worked and went on to become arguably the best Marvel movie to date. Before Star-Lord and the gang were taking on the lackeys of Thanos, they were up against other evils, like cults.

The fourty-third book in Marvel’s Mightiest Heroes collection focuses on the Guardians of the Galaxy, both in their original appearance and one of the latest teams. Let’s get one thing straight: this is not the Guardians you know from the silver screen. James Gunn took some liberties when penning their on-screen adaptations so don’t expect the identical characters on paper, but do expect some entertaining tales, at least. I’ll be making comparisons between the two.

Firstly, we’re given the Guardians’ first appearance, which takes place during Thor Annual #6 (1977). While trying to stop a robbery, the golden-haired God of Thunder is transported to the thirty-first century, where he meets the Guardians of the Galaxy. The team consists of members who are all the last of their respective races… sort of. I’m not going to spoil the tale, but of course he teams up with these galactic heroes to take down a villain. It’s a decent enough tale even though the older comics suffer from information dumping. Still, it’s worth a read.

The bulk of this graphic novel is made up of Guardians of the Galaxy: Legacy (Guardians of the Galaxy, Vol. 2 #1-6). Taking place after the events of Annihilation, the first half of the tale tells of their formation, battle with a religious space cult, finding a blue & white guy in possession of Captain America’s shield, and setting up some interesting questions. Besides present-tense action sequences the story is inter-spliced with the team recounting events these events for a mission-debriefing. This combination brings some comedy to the story and some well-written lines.

Legacy’s second half ties into Marvel’s 2008 mega crossover event, Secret Invasion. This event dealt with many prominent Marvel superheroes being replaced with Skrulls in order to invade earth. It spilled over into most Marvel titles at the time, which meant Drax, Groot, and Adam Warlock were immune to these ramifications. Taking place in Nowhere — the Celestial’s head and a vastly different location to the movie — our heroes are confined to the station while they’re not only attacked by an unknown villain, but try to figure out who is a Skrull, fight-off a political war, and deal with the team almost breaking up. This is another tale asking questions and not answering them. Even so it’s full of so much richness.

Yes, you read correctly, I wrote “Adam Warlock.” As stated earlier, these teams are different to the one seen in the 2014 movie. Along with those characters we also have Quasar, Adam Warlock, and Mantis. Each of these brings a unique power and dynamic to the team. Rocket Raccoon is the tactical expert, along with his plant-friend, Groot, who doesn’t receive much time on the pages; Star-Lord is manipulating and a bit of a dick; Drax is still a destroyer; Gamora is less interesting in this incarnation.

Legacy’s artwork is stellar (see what I did there?) and top-notch for a standard comic series. There’s not a single panel where anything seems out of place or characters are given strange or odd poses. It’s a visual delight.

I realise I keep comparing the Guardians of the Galaxy book to the movie, but I feel as though I should. Readers need to know there are differences here. None of these are negative differences, but they are differences nonetheless. Just don’t expect the same things you’re “used to”.

This Guardian of the Galaxy graphic novel is a must for comic and non-comic readers alike. It’s light-hearted yet serious, light yet dark, and just a well-rounded book. Go out and read it this instant.