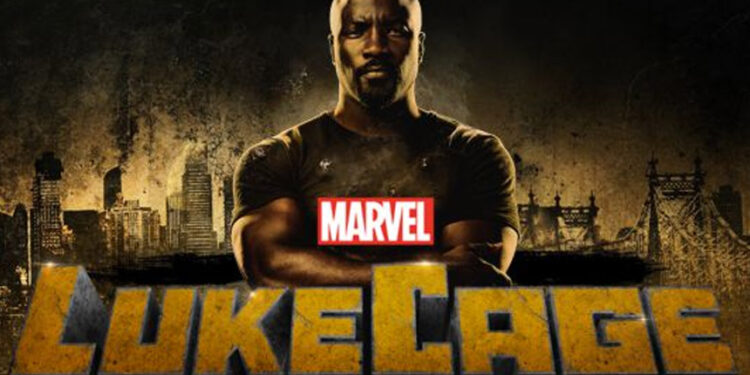 After what seems like far too long, Luke Cage finally gets his chance to shine. But can Harlem’s hero live up to the hype? Sweet Christmas! He does! After the events in Jessica Jones, Luke has spent six months hiding out in Harlem where he’s been working two jobs. By day he sweeps up hair in Pop’s barbershop, and by night he’s a dishwasher at Cottonmouth’s nightclub, Harlem Paradise. It may seem a step down for the man with unbreakable skin and super-strength, but then he’s never really wanted to be a hero. However, when some small-time hoods rob a weapons deal between Cottonmouth’s henchmen and those of mysterious arms dealer Diamondback, it’s time for him to step up and save the neighbourhood.

With his street-level vigilante justice, Luke blows the lid on Cottonmouth and his cousin, Harlem Councilwoman Mariah Dillard’s, illegal deals and exposes the corruption running throughout the city. What starts out as an easy war on crime though soon becomes a nightmare for him, as the bureaucracy of the legal system, public opinion and Luke’s past all come back to haunt him. When Diamondback arrives on the scene with cutting-edge alien tech weapons which can kill him, things get worse. Can Luke Cage survive and save the city? Like the other Netflix Marvel series, this is a slow-burn story. Don’t expect any standard superhero action, and there are no spandex-clad weirdos running around. That being said, Luke gets to dish out some classic Power Man style action on a regular basis as he smashes his way through armies of henchmen. Yet that isn’t what makes him a hero; instead, it’s his willingness to stand up for the community and do the right thing when he has to.

He saves people on a regular basis, whether it’s the life of Genghis Connie, the woman he owes rent to, or complete strangers being held up in a basic robbery. Even when public opinion turns against him and he’s hunted by both sides of the law, he puts his own freedom on the line to do what’s right. He doesn’t kill, tries talking to criminals to resolve issues, avoids swearing and interacts with people within the community.

Mike Colter delivers an outstanding performance as Luke Cage, a man who wants to be left alone but learns to become a hero. Then again, the entire cast shines. Rosario Dawson as Claire Temple – the Night Nurse from all the other shows, whose role in this is pivotal – still makes an impact and Alfre Woodard’s role as Mariah is almost pure Lady Macbeth. Simone Missick as Detective Misty Knight is possibly the breakout star of this series, while Mahershala Ali as Cottonmouth offers a performance more akin to Michael Corleone than Kingpin, and Theo Rossi as Shades elevates the role of henchman to a whole new level of cool. Then there’s the real star of the show: Harlem itself.

Unlike every other superhero show and movie out there, this presents the city as more than just a backdrop. It’s an integral part of the story, a living, breathing environment with years of history which the audience can care about. It’s fitting that the final battle be fought in the streets, with Luke surrounded by the people of Harlem cheering him on. He believes in them and the city, and they believe in him, and moments like that make this a more personal story than others.

While this series does have its drawbacks – from the slower pace and a slightly underwhelming final act – it also delivers on many levels which others don’t, from covering topical issues like Black Lives Matter to absent fathers. It’s well-written, solidly directed, the soundtrack is rich and engaging, and it’s another excellent addition to the MCU. There are also plenty of references for fans, from mentions of Daredevil and Jessica Jones, Iron Man, Justin Hammer’s weapons business and the classic Luke Cage costume (briefly), to a homage to Diamondback’s 1972 costume too. As with Jessica Jones, this isn’t going to be for everyone. The JJ series was like her character, gritty, tough and aggressive. By contrast, this show is like Luke Cage himself: thoughtful, intelligent, soulful and full of heart. He’s the hero we all deserve.