Marvel’s The Defenders Season One Review – Better Than Iron Fist 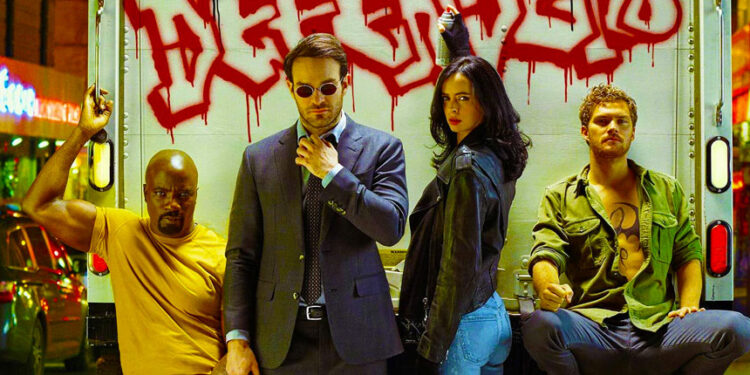 Finally, after waiting so long for this, fans of Marvel’s Netflix TV heroes get to see them team up. However, the reward wasn’t quite worth the wait and the end result is bound to disappoint many. Because for every great moment The Defenders offers, there’s usually another moment where the wafer-thin plot becomes hard to ignore or the pacing seems to be dragging just a little too much.

The ancient criminal organization known as The Hand, led by Alexandra Reid, ups its timetable in bringing about the destruction of New York. In order to do this, they resurrect Elektra Natchios and turn her into their primary assassin, tasked with capturing Danny Rand – Iron Fist. Iron Fist’s mission to destroy The Hand isn’t one he fights alone, as he joins forces with the unbreakable Luke Cage, superhuman private detective Jessica Jones and lawyer Matt Murdock – Daredevil. While each of their goals is different, their paths converge and the battle is onto save New York from an enemy who seems to have infiltrated every aspect of the city… First, let’s look at the positives.

The actors all bring their A-game, making the most out of their moments of screen time even when the script doesn’t give them much to work with. Since this is a character-driven show, it pays huge dividends. The character of Danny Rand, whose Iron Fist show was easily the worst of all the series, is at his best here now that he’s got more interesting characters for his personality to bounce off of. Jessica Jones is shown at her best too, wise-cracking with snarky insults and proving her detective skills. Luke Cage is all heart, while Daredevil does what Daredevil does best, which is to try and save everyone. Individually they’re great, together they’re excellent.

The interplay between these characters works perfectly. When Iron Fist and Luke Cage have the inevitable fight against each other at their first meeting, and then fight alongside each other against The Hand for the first time, those are two of the best moments of the entire series (and in comic book adaptations in general) because it’s exactly what fans want to see. Jessica and Matt’s cat-and-mouse chase through New York is smart and shows them both at their best. Even each character’s “sidekick” (or Hero Support) lends their support in some way. In short, you can’t help but enjoy seeing all of them on screen.

The problems with Marvel’s The Defenders is really with the story. The plot is as simple as they come: The Hand own a building and are up to no good in it, and our street-level Avengers need to stop them. That’s it. There’s all the mysticism of a walled underground area linked to K’un-Lun, the mystery of villain Alexandra’s apparent immortality, in-fighting amongst the leaders of The Hand, a conspiracy about The Hand controlling the media, the murders of an architect and some street kids, and of course there’s Daredevil trying to save Elektra and the fate of The Chaste… but none of them really seem too important. Really, all it’s about is beating up or killing all the villains in a building to stop their diabolical plan. It’s like the last act in a James Bond film only slower, and with less attention to detail.

Because of this, the pacing seems uneven. Inevitably our heroes come together as a team, splinter because they’re not on the same page, and then finally unite successfully. It’s like many other superhero team films and shows, including The Avengers, except that’s not a great system of storytelling because they don’t really have any reason to not work together and so it seems painfully forced. The same goes for Alexandra, who initially has the potential to be one of the most fascinating villains in the MCU since the Kingpin. That potential is squandered, with no further depth being given to her character.

Even the destruction of New York is a vague plot point. New York will be destroyed… how, exactly? Why? Apparently, it just is… or isn’t, it’s kind of hard to tell by the end. As for the hero support, there’s an Assault on Precinct 13 opportunity on screen, which goes nowhere. Plus, once the villains are defeated, they miss out on what could have been the one moment every comic book fan watching has wanted to see. You’ll know what it is, and it would have made sense for a pair of the main characters, but it doesn’t happen. Despite all these problems seeming to mount up, there’s still plenty to enjoy with this series. The Defenders is better than Iron Fist and certainly shorter and with more likeable characters. It’s got a playful sense of fun at times and lives up to some of the hype. It wraps up some of the plot threads from the various series, is filmed well and has great performances. It’s just let down by its flaws, making it feel like a missed opportunity.

Marvel’s Netflix shows have been solid for the most part, and The Defenders should have been the rebound show after the let-down of Iron Fist. It isn’t, although it tries to be. Let’s just hope that the upcoming Jessica Jones season 2 is a step up.