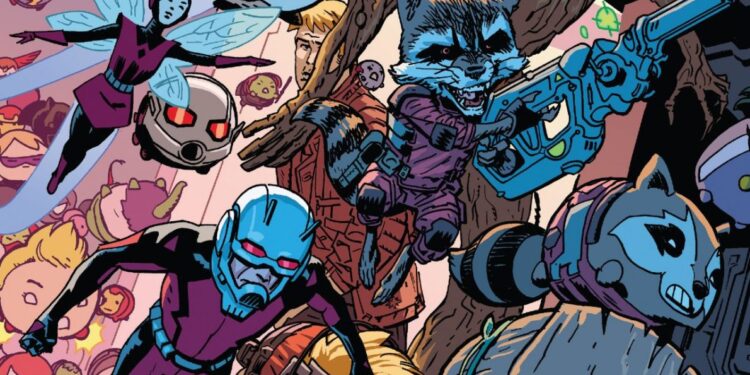 How do you end a series on a high note? You give the fans just what they want, and have fun doing it! We review Marvel Tsum Tsum #4. [dropcap]A[/dropcap]s unbelievable as it may sound, Ultron’s alliance with his plush toy Tsum-Tsum counterpart may have just given him the edge he wins to finally wipe out all of humanity and to conquer the Earth. Can the arrival of the Avengers turn the tide for the good Tsum-Tsums and their human teenage friends? More importantly, can The Collector behave himself over tea, defend himself against being called an aging glam rocker and fend off some unwanted affections of a single mother?

Right from the very beginning I’ve had my doubts about this series, since it’s based on a popular line of toys. I’ve been skeptical about this whole thing, and yet with each issue it’s won me over with its charm, intelligence and absolute sense of fun. And now that this is the last issue, I’m wishing it could stay a while longer. This is ridiculous, I’m blubbing like that kid when E.T. left… and it’s a good thing. Like any good story should, it’s struck an emotional chord in me and appealed to my inner child. So on a personal level, I’d like to thank Jacob Chabot, David Baldeon and everyone else over at this title for reminding me of just how fun comic books can – and should – be.

As with all issues so far, this has had a sense of playful glee to it and continues to prove that the Marvel U is a place where there’s fun and danger around every corner. Ultron is every bit as evil as he should be, being completely in character throughout. The same goes for the Avengers, so fans have no cause for concern. But once again the real stars of this are the kids and their Tsum-Tsums, proving that heroes can come in all shapes, sizes and ages. Then there’s The Collector, who possibly gives one of the finest comedic performances in Marvel comics in years. Every facial expression is a gem, every line of dialogue offers a laugh, and he even offers a Howard the Duck reference just for added impact.

It’s a fun, funny, brilliant issue to round off what’s been a wonderful series. Now, is it too much to hope for an animated adaptation of this or, even better, an ongoing series? Come on, Marvel! Give us more Tsum-Tsum!