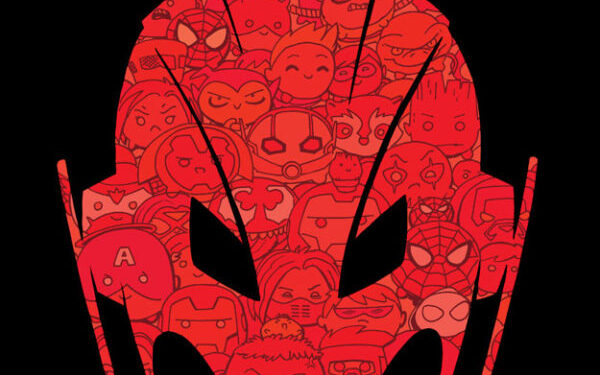 Despite my loathing of toy tie-ins and product placement, I was keen to read the second issue of Marvel Tsum Tsum #2… and I’m glad I did. Sure, it’s nauseatingly cute and so adorable that you just want to kick the fluffy toys out of a window, but… Dammit, I admit it. It’s fun. And cute. And adorable. And, yes, it’s actually a surprisingly great little story without ever being patronising to the younger readers.

Picking up from the last issue, Holly, Bert and Duncan take it upon themselves to teach the sentient fluffy Tsum Tsums what it truly means to be a hero. Of course, that means they have to slip into their playsuits – sorry, costumes – and take the toys out on patrol. Of course, since they’re kids the most that they can do is try to find a puppy which has gone missing. Meanwhile, down-on-his-luck villain The Looter plans to teach his Tsum Tsum how to be evil and settles him down for an evening of watching The Fresh Prince Of Bel-Air. Of course, it all goes horribly wrong when his Tsum Tsum watches footage of Ultron on the news and copies what it’s seen. As the kids and their heroic Tsum Tsums battle a real-life Ultron drone in an alleyway, The Looter’s Tsum Tsum makes a few copies of itself and they turn into pocket-sized Loki, Venom, Green Goblin and Rhino toys. The Looter’s plan to use them in a bank robbery gets out of hand though when they go on a rampage, but thankfully there’s a hero on hand who may be able to stop them: Ant-Man! Meanwhile, out in space, the Collector realises that his Tsum Tsum shipment is missing and he wants them back…

Amazingly, Marvel Tsum Tsum #2 keeps pushing the story forward with laughs and surprises. It flows so smoothly that it barely lets up for a second, delivering one amazing moment after another. The light-hearted tone of it works perfectly, reminding readers that the Marvel Universe can be a fun and exciting place to live in, a place where you never quite know what superhero or supervillain might be waiting around the next corner. The kids come across so naturally that they’re easily relatable to fans of any age, without ever feeling forced. The Looter fittingly steals every scene he’s in, while Ant-Man makes for one of the coolest cameos in years. As for the Tsum Tsums themselves, they’re fun and chaotic in a style almost reminiscent of Gremlins.

If there’s any drawback here (and this is really nit-picking) then it’s the old bugbear that this series doesn’t seem to affect anything in the MU, even if it’s set there. It’s still an outlet to sell toys. But seriously, when an issue does so much right and is so thoroughly entertaining, who cares? This is one for the kid in all of us, so just enjoy Marvel Tsum Tsum #2.