For those who don’t already know, 2018 marks the 10th anniversary of Marvel‘s Cinematic Universe (MCU). We’ve already seen some of the fruits of this celebration with the an all-star superhero cast featured in Avengers: Infinity War. Marvel has teamed up with IMAX to further its celebrations by offering a movie festival for all its movies at IMAX theatres.

Part of the festival’s showcase will be the digital upgrading in the quality of all of the previously non-IMAX released films, which include some of the originals like Iron Man (kicking off the MCU), The Incredible Hulk and Captain America: The First Avenger. Unfortunately, these digital remasters will be screened only at “select” IMAX theatres across North America, and there aren’t any plans as of yet for the festival to launch in other regions. This most likely means that South Africans won’t be treated to some of the fun during the celebrations.

The 10th Anniversary Festival at IMAX theatres will run from 30 August to 6 September 2018, with tickets already on sale. The first five days of the screenings will feature the MCU films in chronological order, which will then follow a two-day period and revolve around origin stories and the likes. The final day of screenings will be left up to a vote of fans’ favourite two films from the MCU, with voting closing on 17 August. Here’s a sneak peek at what Marvel is offering to the fans. 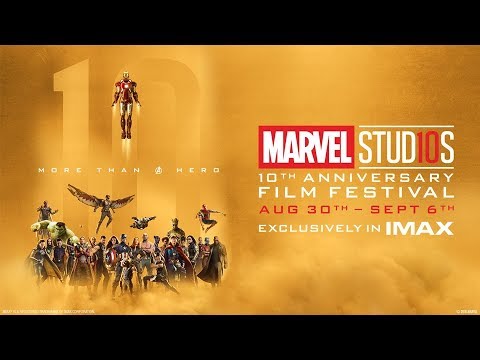