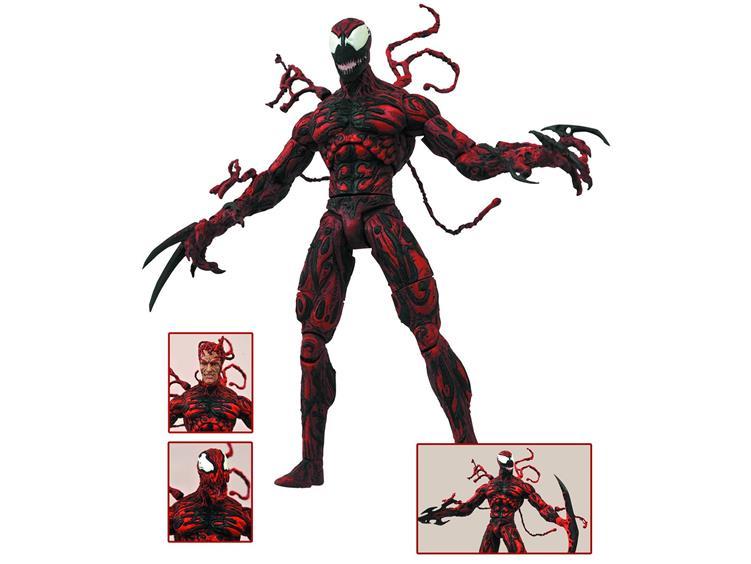 When this figure was announced I am sure most collectors thought that it was definitely overdue. The first attempt at a Marvel Select Carnage was not that great and definitely one that was not memorable. The release of Anti-Venom showed us just how great a symbiote Select figure can look. Last year’s Venom Marvel Select release just upped the ante and set a benchmark for the next symbiote figure to match and Carnage does just that. This figure surpasses its predecessor in every way. 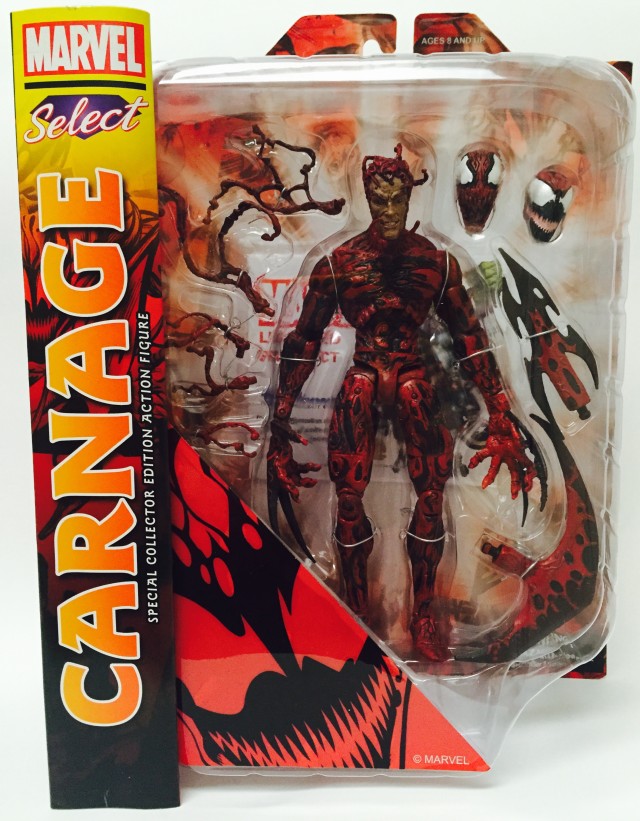 This figure is huge. Standing at 8.5 inches, this Carnage is one tall figure and that is definitely not true to scale but this is great as each millimetre of this figure is filled with detail. The sculpt is simply amazing, doing the character justice in every way.

The entire figure is a combination of red glossy paint and plastic which is then riddled with the black textures of the symbiote. This figure comes with three head sculpt and each one is highly detailed and shows a different version of this villain.

The first head sculpt is that of the host Kletus Kasady, much like the Eddie Brock head sculpt on the Venom Marvel Select. Kletus’ face has some great detail and this head sculpt shows the symbiote merging with its host as it looks like it is about to wrap around his face to form one of the alternate heads that it comes with.

This figure also has the Superior Carnage alternate head. This has a great level of detail and looks very extra-terrestrial, rough and it is definitely my least favorite of the three heads.

The traditional Carnage is the third head sculpt included with this figure and this one looks excellent. He has the pink mouth, black teeth and big pearlescent white eyes. 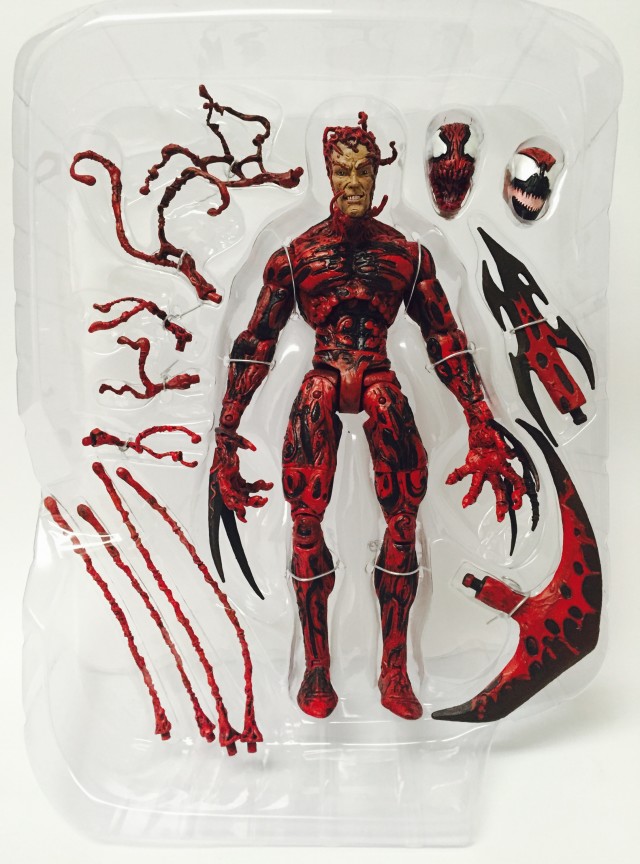 Unlike his father, Venom, this symbiote has a slender frame and this figure captures this perfectly. However, as mentioned earlier, this figure is just too tall as it towers over both the Venom and Spiderman Marvel Select figures and that is simply not comic accurate.

His hands have some great detail in the form of sharp claws that extend from the top of his hands. The claws on each hand differ vastly and this creates one menacing looking figure. This figure does not come with alternate hands, however, it does come with weapons that can replace his hands. Both weapons are perfectly sculpted and they boast a great paint finish. His right hand can be replaced with a deadly axe and his left hand can be replaced by a terrifying scimitar that has blades facing in every direction.

The sculpt is also riddled with holes. They are for the tendrils that come with the figure. You have tendrils of different shapes and sizes and these can be used in order to create a great looking carnage figure that looks as though it jumped right out of your comic book. This is truly an impressive piece and it has the articulation to match!

This figure has multiple points of articulation. The designers knew that when it comes to this character he needs to be fully poseable or it would fail like its predecessor. In order to see Carnage at his best, he needs to be able to strike his signature poses and this figure has no problem doing just that. He has a ball joint at the head which allows for a great range of motion in each direction. He has ball jointed shoulder which can move in all directions with ease, a swivel at the upper bicep, a single jointed elbow. Swivels at the wrists as well as hinges on his hands. There is a ball joint in the diaphragm that allows for the figure to swivel and ab crunch. The figure is also able to swivel at the waist. He has peg joints at the hip which allow them to move outward and forward. His butt sculpt prevents the legs from kicking backward. Carnage has a swivel above the knee, double jointed knees and his ankles are able to move up and down with ease. He also was ankle pivots which allow for great poses.

The accessories for this figure actually form part of the sculpt. Much like Marvel Selects first attempt at Carnage, this figure does not come with a display base. However, the accessories that you are given is definitely a far better option.

The packaging is the standard Marvel Select library style boxes which contain the character drawing of Carnage on the side panel. This picture is better than the one used last time. Then the back of the packing has a product picture and a brief character bio for the bloodthirsty villain that longs for senseless chaos and destruction.The front has a great window style which shows the figure off as well as its wealth of accessories.

This figure is definitely the best Carnage that Marvel has produced thus far. As a buyer, I am happy that I did not purchase the 6” Marvel Legends Carnage of last year as this one totally outshines it in every way. This figure has to be one of the best that Marvel Select has released thus far and it is definitely worth each cent that you will pay for it – if you can find it.

A huge thank you goes to Reza at Project Mayhem for sourcing this extremely popular figure. Visit www.projectmayhem.co.za for the best Marvel Select figures nationwide at the best prices!