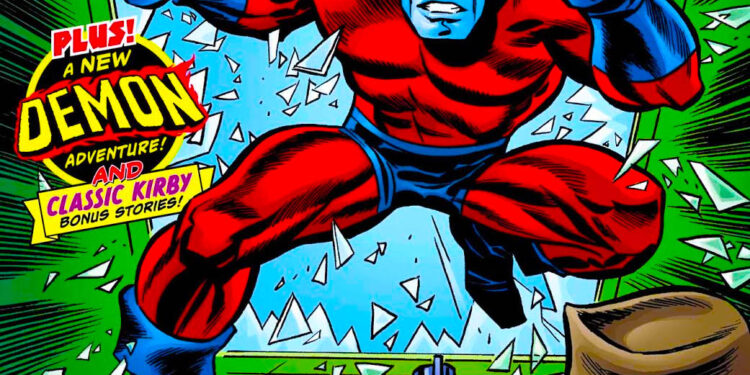 If you can only buy one of the Jack Kirby tribute comics from DC this year, Manhunter Oversize Special #1 is the one.

Paul Kirk – the Manhunter – battles against the criminal underworld in Empire City. His war on crime is a brutal one, but life as a hunter of animals has prepared him for the most dangerous prey on Earth: man itself. His actions have not gone unnoticed, however, and while on his latest mission he’s confronted by Sandman and his sidekick Sandy, the Golden Boy – who want to teach him that there’s a difference between violence and true justice. In the second featured story, Jason Blood hopes that an exorcism will cast Etrigan the Demon out of his body. And Jack Kirby’s classic feature tells of a woman whose face is always bandaged whenever she goes out in public… but what terrifying secret is she hiding? Manhunter has become one of the truly forgotten characters of the Golden Age of comic books, and it’s great seeing him in action once again. He’s the sort of no-nonsense hard-ass who makes Batman look like a wimp, as he bludgeons mobsters, insults sidekicks and complains about his underwhelming rogues gallery of enemies. When Sandman and Sandy the Golden Boy show up, you’ve got the obligatory fight between them. Except it’s more like the legendary alleyway fight between “Rowdy” Roddy Piper and Keith David in They Live.

Unsurprisingly, when seen through our modern eyes Manhunter is a politically incorrect thug. He revels in brute force and boasts about being a hunter of animals (albeit in a “noble” fashion), PETA and Greenpeace be damned. By today’s standards, it sounds appalling; but he can’t, and shouldn’t, be judged by today’s standards. He’s fascinating and heroic, like a costumed adventurer out of the old movie serials, and the confrontation between two differently-styled heroic vigilantes is an instant classic. The writing is smart and quick-witted, while the art does a masterful job in replicating much of Kirby’s style and use of negative space. The Demon story is quick, simple and packs quite a wallop too. Etrigan and his host, Jason Blood, can be hard to flesh out but the basic premise of their dual existence being tiresome for both is handled well. Some more pages of story would have done it even more justice, but as a backup feature it more than does the job.

As for Kirby’s contributions, one is a rather neat mystery which would have worked as a Twilight Zone episode as it juggles a modern romantic thriller with a supernatural gothic horror. Sadly, his art in this one isn’t the best example of his legendary talent, but the story holds up well. His short features about what the real-world future holds in store is both nostalgic pulp and in many ways prescient but, at its heart, it’s fun to look back at that time with a sense of wide-eyed wonderment.

This may not be the special everyone would want, but if you’re looking for an all-round entertaining read which truly honours The King, then Manhunter Oversize Special #1 is it.