A few months back I was given the opportunity to review a unique title. Okay, that was an understatement. This title was so bizarre you could not help but love it. We always took advantage of rocks and now it is time for the rocks to fight back against man. We decided to interview the creative team behind Man Vs. Rock in order to find out just how they came up with this unique comic idea.

Man vs. Rock is a ponzi scheme we started in order to pay our gambling debts. It’s also an absurd comic book about a semi-homeless geology professor named Buck Stone who thinks that rocks are about to attack us, unless he stops them before it’s too late.

2) There has to be an original origin story behind the creation of this comic. How did it come about?

I was sitting in my parents’ basement with my fake girlfriend one Saturday evening, and thought to myself: “Kevin Bieber – I want to be rich.” So then I thought of ways I could get rich and it dawned on me – an independent comic book! After that, Victor and I thought we should play it safe and steal an idea that’s been done to death, so we obviously decided to have a book about people fighting rocks.

Everything was great, but still we needed a hook to make us unique, and then it finally hit us … a white male protagonist! With all that in place, nothing could stop Man vs. Rock. 3) Who was the first person that you pitched this idea to and how did they react?

The first people we pitched to were George W. Bush, who thought it was the smartest idea he’d ever heard, and Barack Obama, who immediately lost hope and went on welfare.

4) Can you give the readers a brief synopsis of Man vs. Rock?

Man vs. Rock is about Buck Stone, a geology professor at the Robert E. Lee University of Northern Aggression in New York City, who thinks that rocks are out to get us. Why? Because in his mind, humanity has used and abused rocks for its own selfish purposes since the beginning of time, such as by using them to build the pyramids, crucifying a rock instead of Jesus on the Cross, and waterboarding rocks to find Bin Laden. So he thinks it’s only a matter of time before the rocks strike back, and plants tons of C4 explosives around every major rock outcrop on earth.

Society reacts, and chaos and hilarity ensue! If you like M. Night Shymalan movies not named “the Sixth Sense” or getting arrested for treason in Bulgaria, then you’ll love Man vs. Rock!

5) Jarred Lamp does a great job on art. His lines are harsh and gritty creating a strong contrast due to the subject matter. Where did you end up finding him… under a rock?

J-Date (Craigslist seriously). And you’re right, Jared does a fantastic job on art. His art portrays the true pain and hardship of somebody that has suffered the loss of a loved one at the hands of a dirt-sucking, conniving rock. We have often asked Jared about his personal history with rocks, which is followed by a long look into the distance and a clenched jaw. Could he be the great-great-grandchild of Buck Stone? We’ll let you be the judge. There’s nothing we love more than talking about ourselves, so sure! Man vs. Rock was named the Indie Book of 2014 by Comic Bastards, and a Top 15 Indie Book of 2014 by Shawn Perry of Bleeding Cool. Unfortunately, we still have yet to win any scientific discovery awards from the United States Geological Survey … but that doesn’t surprise us. Those government rock-loving bureaucrats don’t want people to know the truth.

You can also check out our reviews at .

7) Did you expect such a bizarre concept to be received as well as it has been?

We thought it would be received about as well as Bill Cosby at a women’s rights conference, or a vegan at one of my weekly ritual animal sacrifices. We really had no idea what to expect. When we did our first con at APE, the ultra-indie con in San Francisco, all the other creators thought we were certifiably insane. In fact, one creator we met the night before the con thought our idea was so bad that he actually had one of his friends buy a copy just so they could mock it. After he read Man vs. Rock, however, he loved it, and actually took it upon himself to write a very kind review. Ever since then, and after seeing reactions to it by readers at other cons, we knew that our bizarre concept was something that resonated with lots of people.

8) Will the Man vs Rock crew be present at any of the upcoming expos in the USA?

Pending approval from my parole officer, Man vs. Rock will be at:
– Wondercon
– Amazing Las Vegas
– APE
– Long Beach Comic Con, and
– Comikaze

Come say hi, and we’ll give you a free half-eaten burrito! 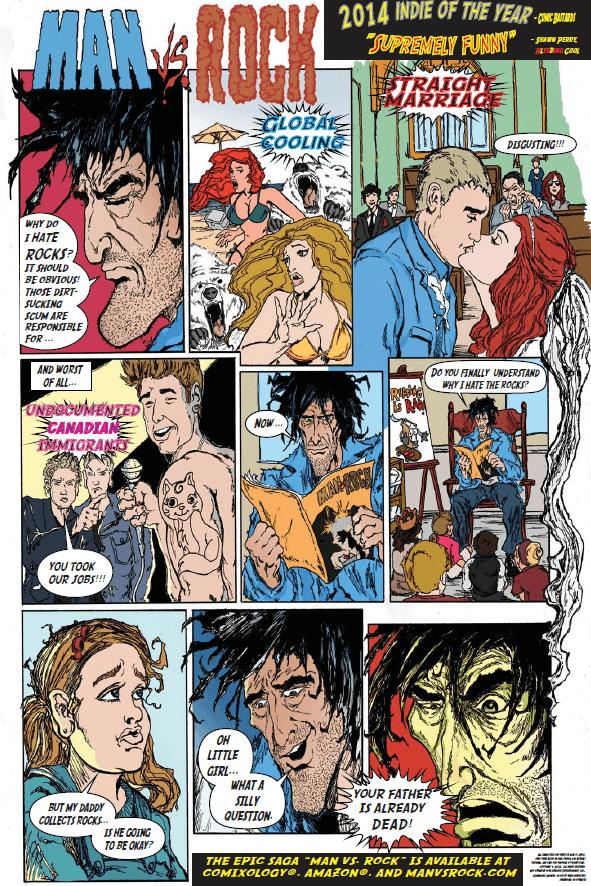 9) When will the 4th Volume of this series be releasing?

When the Angels win the pennant … or this summer, whichever comes first.

10) Where can readers go in order to get themselves copies on this absurdly funny title?

So many places to choose from! You can check us out at: Thus far I have only read the first volume and it was a fun experience from the beginning to end. Man vs Rock is really unique and it shows the level of creativity that can only be found on the indie market. You cannot recycle stories and concepts and use synonyms to cover your tracks. This is the Indie scene where you need to be original and creative in order to survive. The crew behind Man vs Rock personifies the Indie Comic scene as their level of originality is simply unrivaled.

Fortress of Solitude would like to thank Kevin Bieber and Victor de Troy for taking some time out of their busy schedule in order to keep our readers entertained. Get your copy of this comic today!