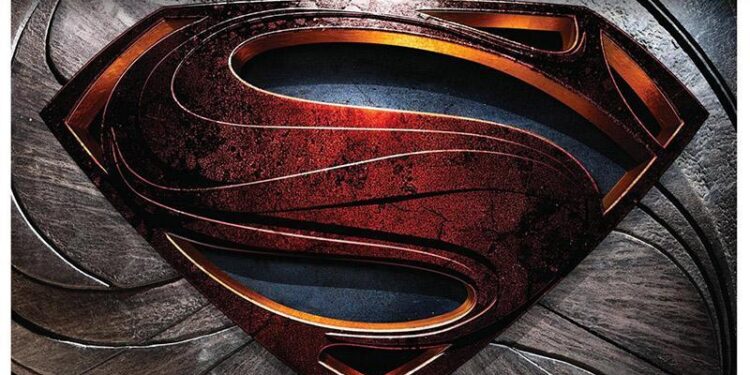 In the pantheon of superheroes, Superman is the most recognized and revered character of all time. It’s no surprise then that an extra effort has been made to bring a very special limited edition to fans of Zach Snyder’s hotly debated Man of Steel film. The 3D Limited Collector’s Edition, which features the theatrical version of the film in 3D hi-definition and 2D hi-definition, also includes a limited release metal “S” glyph with lucite glass stand to display proudly. On the surface it might seem like a must-have, but digging a little deeper might leave a few disappointed. 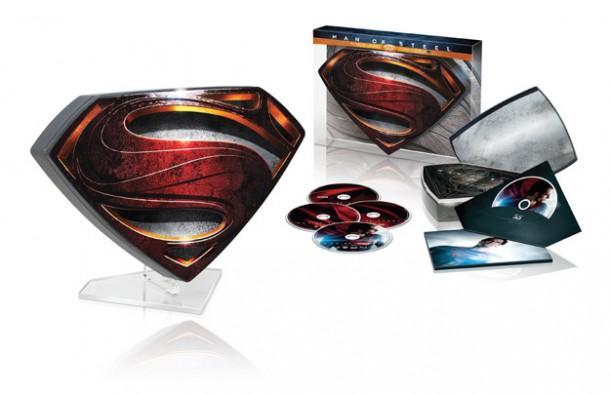 Jonathan Kent: You just have to decide what kind of man you want to grow up to be, Clark. Whoever that man is, he’s going to change the world.

“My father believed that if the world found out who I really was, they’d reject me out of fear. He was convinced that the world wasn’t ready. What do you think?” Superman asks Lois, a question that director Zach Snyder clearly aims at audiences of Man of Steel as he shepherds in a new dawn for the comic book icon.

With the help of producer Christopher Nolan, Superman finds his way into a much darker, grittier, Dark Knight-inspired retelling of the character’s origins, shedding most of the Reeve-esque innocence in favour of a grimmer mud-coloured superhero grounded in a real world. It’s been 35 years since Superman’s beginnings have been played out on the big screen and Snyder takes huge liberties early on to chuck out everything you know about the story. Everything. The title “Man of Steel”, however, tells you exactly what to expect; an immense summer blockbuster, that shows Superman in a completely different light. Purists might hate it, but it’s hard to deny that there simply isn’t a more epic comic book movie out there that could even compare. You will be blown away!

Over the years, we’ve seen a number of attempts to bring the world’s most popular superhero to the big screen in a way that fully portrays the character from the comic books. Unfortunately, Superman has always been played out as a light-hearted second rate superhero who finds the time to rescue a cat from a tree, a dog from a burning building and help old ladies with car problems. Richard Donner’s 1978 film Superman: The Movie certainly depicted the character that way, and 2006 pseudo-sequel Superman Returns followed suit. Man of Steel doesn’t make the same mistake.

Snyder and Nolan sidestep the familiarities by placing our hero in a world where he is forced to make bigger decisions while facing a more threatening villain. The result is that all traces of the previous movies have been completely removed from the reboot and Superman is sent on a rampage that unfolds in the most epic fight sequences ever shown on screen. Accompanied by an amazing score, courtesy of Hans Zimmer, audiences are treated to action of epic proportions. Finally, Superman learns to kick ass.

Man of Steel is bound to be a film that divides audiences. While it is beautifully shot, with a few comparing it to a Michael Bay meets Terrence Malick mash-up, it’s easier to draw heavy comparisons to The Matrix rather than any previous Superman film. The lengthy CGI fight sequence over New York, reminiscent of a hundred 9/11 attacks, has also been a concern for a few critics, who have been titling the movie “too epic.” Don’t be fooled by the 55% rating on Rotten Tomatoes. This is the Superman movie we’ve been waiting to see.

Jor-El: You will give the people an ideal to strive towards. They will race behind you, they will stumble, they will fall. But in time, they will join you in the sun. In time, you will help them accomplish wonders.

The familiar story starts off in a very different looking Krypton, where Jor-El (Russel Crowe) is forced to send his infant son Kal-El to earth in hopes of protecting him from eminent danger. The boy grows up as an outcast, eventually drifting between jobs and struggling to fit into society. Clark Kent has become a guardian angel to those around him, saving various people and disappearing to conceal his identity. He wrestles with the advice from his earthly father, Jonathan Kent (Kevin Costner), who believes that he should hide his gifts from the world versus Jor-El’s encouragement for him to embrace his differences in order to shape the world. Soon his father’s arch enemy General Zod (Michael Shannon), a villain from his home planet, comes searching for Kal-El, putting humanity at risk. The obligatory background, which is done through a series of flashbacks, is re-invented to suit a very modern and different reflection of The Man of Tomorrow, with Clark on a quest to find his true identity.

General Zod: You are not alone… My name is General Zod. I have journeyed across an ocean of stars to reach here. Your world has sheltered one of my citizens. He will look like you, but he is not one of you. To those of you who know of his location: the fate of your planet rests in your hands. To Kal-El, I say this: surrender within 24 hours, or watch this world suffer the consequences…

Make no mistake about it, Henry Cavill is Superman. He embodies the superhero perfectly and looks exactly like the comic book counterpart. His performance is only matched by an enthralling Michael Shannon and Russel Crowe. I’m pretty certain that Amy Adams performance as Lois will come into criticism, but given that this is a new Superman universe, it is easy to forgive the “different” approach.

The biggest problems with Man of Steel possibly lie within the editing room. There are often abrupt cuts to sequences that feel out of place and characters who’ve had their screen time reduced. Personally, it could have done with a longer cut. It’s easy to see that there are at least another 30 minutes lying around somewhere, begging to be re-inserted for a Director’s Cut. Weighing in just over two hours I imagine that this was all done in the hopes of creating a fast-paced story. The love story between Lois and Superman also lacked a bit and could have done with an extra ten minutes or so.

Perry White: Imagine how our world would react if they came face to face with this…

It’s good to have Superman back. It’s even better to see him soaring through the sky punching bad guys at breaking neck speed and relying purely on his strength to overcome them. If you’re expecting another Superman Returns you’ll be bitterly disappointed. The final battle sequence makes The Avengers fight look like a minor tremor in comparison. Man of Steel is a great movie not because of its story, but because it makes Superman cool again. And that’s worth seeing! 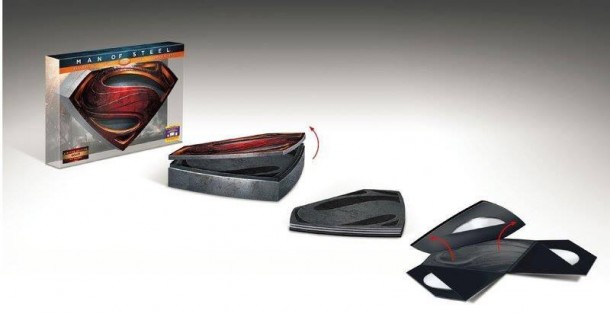 The 2D and 3D image of the Man of Steel transfers provides consistently high detail – crisp, razor-sharp and remarkably defined. It comes to Blu-ray in 1080p AVC MPEG-4 encoded video, with a 2.40:1 aspect ratio. While the 2D image is flawless, offering rich black levels and excellent contrast, the 3D counterpart (which was converted to 3D in post-production) suffers from being pretty ordinary in most areas. It’s not until the final fight scenes that the 3D comes alive. It does enough to warrant watching it in 3D (spacial depth is present in quite a few of the fight scenes with pop-out effects of rubble thrown the audience way) but not enough to be a necessity. Of course, with the film’s fast pace comes the danger of ghosting. Thankfully, most of this is kept to a minimum. Just don’t expect it to stand out in the stereoscopic crowd.

Not surprisingly, Snyder opts for darker, Dark Knight-inspired visuals for Man of Steel. This transfers amazingly well. The blacks are extremely clean and the colour palette remains intact. Shot in a mix of live action and CGI, the film blends the two worlds seamlessly.

The DTS-HD Master Audio 7.1 track does what it should and delivers a full surround sound, putting the low and high-end frequencies of your sound system to work. Even with the epic background music from Hans Zimmer, the surround speakers are often involved with enveloping the viewer in successful cinematic atmosphere. Everything is mastered to precision, offering real-world sound environments accompanied by a really great score. Sound effects can be heard coming from every possible direction, fully emerging audiences into the Superman world. The biggest let down of the Man of Steel: Limited Collector’s Edition is the lack of extras. While Disney takes spoils their fans with jam-packed extras, Warner only offers the bare essentials. This is incredibly sad, especially when considering the amount of material could have been added with just a little more thought and effort. For example, the announcement of the Man of Steel sequel could have been a worthy extra. Or how about a Perry White short film? Maybe a Lois Lane adventure? A few Superman cartoons perhaps? Trailers to older Superman movies would also be welcomed. Alas, there is nothing, absolutely nothing, to make these disks remotely interesting in the extras department.

· Journey of Discovery: Creating “Man of Steel” – This immersive feature-length experience allows you to watch the movie with director Zack Snyder and stars Henry Cavill, Amy Adams, Diane Lane and others as they share the incredible journey to re-imagine Superman.
· Strong Characters, Legendary Roles – Explore the legendary characters of the Superman mythology and how they have evolved in this new iteration of the Superman story.
· All-Out Action – Go inside the intense training regimen that sculpted Henry Cavill into the Man of Steel and Michael Shannon and Antje Traue into his Kyptonian nemeses. Includes interviews with cast and crew.
· Krypton Decoded – Dylan Sprayberry (Clark Kent, age 13) gives the lowdown on all the amazing Krypton tech, weapons, and spaceships featured in “Man of Steel.”
· Planet Krypton – The world’s first exploration of Krypton and its lost society.

The Man of Steel disks have been spinning in my PS3 non-stop since the release, but there are a number of things that could have been improved on. The cardboard disk holders inside the metal casing is another example. The disks annoyingly keep slipping in out and out of position. Of course, all these are just petty little things to consider before purchasing. Real fans wouldn’t be persuaded by any amount of complaints. Nor should they be. 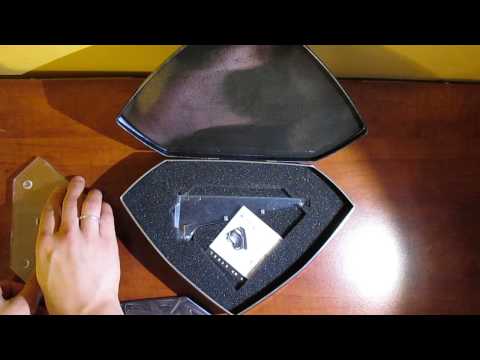