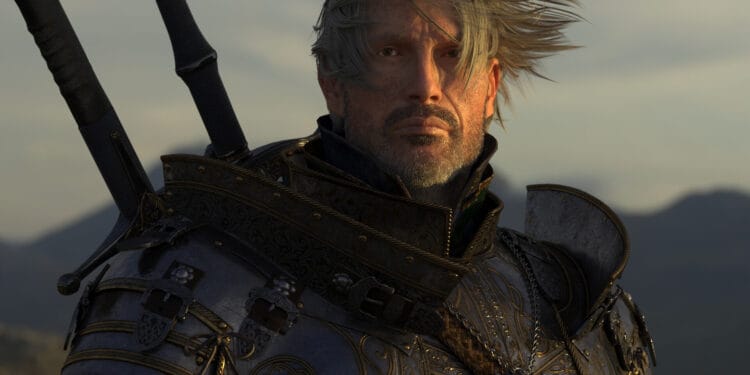 Henry Cavill has proved himself as the right choice to play Geralt of Rivia in Netflix’s The Witcher live-action series. Not only has the actor proved time and time again that he loves video games – but he also spent over 100 hours playing The Witcher 3 In preparation for his role as the stoic monster hunter. However, long before he was revealed to be playing the character, fans had other ideas about who might have been a great pick for Geralt in The Witcher, and that’s none other than Hannibal Lecter himself, Mads Mikkelsen.

Beyond the eerie facial similarities, there’s no denying that Mads Mikkelsen has shown more than enough acting skills to play an outstanding witcher.

In the fantasy world where The Witcher takes place, witchers are divided into groups called schools, which are essentially different organizations with particular training techniques. Geralt belongs to the School of the Wolf, as indicated by his medallion and his nickname, the White Wolf.

That said, witchers from different schools have varied approaches as to how a witcher should conduct themselves. Though only a handful of schools (and witchers) remain, the duty of killing monsters is still a respected one in the complex world of The Witcher.

What all of this means is that, if Mads Mikkelsen were to be brought into Netflix’s The Witcher show, he would be more than fitting to play a witcher from another witcher school. There’s no need for him to replace Cavill in the show, as both actors on screen at the same time would be a treat for fans of The Witcher and TV in general.

As we all know, witchers prefer to work alone, which would make a collaboration between Mads Mikkelsen and Henry Cavill a short-lived one. Fortunately for fans, the Witcher books favour these sorts of short stories over long narratives, which means that Geralt coming across another witcher in the line of duty is nothing unheard of.

The Face of a Witcher

Any way you look at it, Mads Mikkelsen looks like he came straight out of a fantasy novel. The Danish actor has the facial features of a medieval hero, and some filmmakers have definitely noticed that.

Movies like Valhalla Rising and Age of Uprising: The Legend of Michael Kohlaas have demonstrated that Mikkelsen looks like a natural wielding a sword. Age of Uprising in particular looks like it’s just a The Witcher adaptation that takes place in a realistic setting.

There’s also the fact that Mads Mikkelsen bears a striking resemblance to Geralt of Rivia in The Witcher 3. This is something that fans were quick to point out, and it’s also the reason why there are so many fan castings featuring Mikkelsen in a prominent role within the Witcher universe.

The actor’s experience in successful TV shows like Hannibal is also proof that Mikkelsen knows how to handle a dramatic character in a serial production – which is something that not every actor can say.

Netflix’s The Witcher is still in its infancy; with only two seasons so far, there’s still lots of potential for the series to grow in new and exciting directions. Whatever’s the case, we just can’t wait to see one of the best actors to ever play a villain on the big screen playing a character in such an awesome show. Come on, Netflix: he looks like he was born just for this show! It wouldn’t be surprising to hear that Mikkelsen has his own sword collection or something.

Would you like to see Mads Mikkelsen in The Witcher?