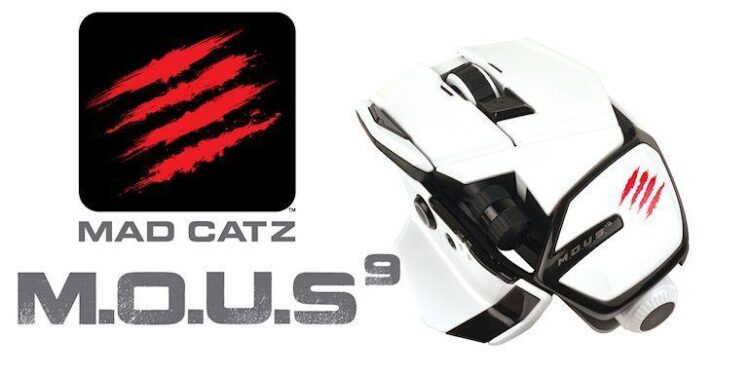 Mad Catz are well known for their outrageously styled mouses, having previously released the R.A.T. range a few years back. The range included a list of fully adjustable peripherals, which came standard with its own Allen Key to make those necessary alterations. These devices were branded as gaming mouses. It comes as a bit of a surprise, then, that Mad Catz has created a new range of devices, marketed as an “everyday, non-gaming” device. The updated design on the M.O.U.S. 9 may have seen a new approach, but how much different is it when compared to its older brothers and sisters?

At first glance, there’s no doubting the origins of the M.O.U.S. 9; a Mad Catz product through-and-through. As always, the design doesn’t follow the standard, one-piece plastic build, but is broken into separate sections, some of which are adjustable to suit the size of your palm. The palm rest, for example, can be extended by a simple release button, which then locks into place once your comfort level has been reached. For many first time users, it does take some getting used to, but ultimately provides comfort that far outweigh the standard approach.

The overall design includes many (rounded) square edges, which looks like and engineering project as opposed to something functional. The geometric design still has the same basic functionality you will expect from a mouse, having two left and right click buttons, as well as a scroll wheel. The additions come in the form extra, programmable buttons; one to the right of your index finger, a sensitivity toggle button behind the wheel, the back and forward buttons on the thumb, a thumb wheel behind the left click button, and a large thumb button. Ten buttons in total. To programme the functions for each button, a simple software download is required from the Mad Catz website. The rubberised feet add to the overall accuracy of the M.O.U.S. 9, which is already comfortable to grip, and use. Short of throwing in a crazy amount of buttons, Mad Catz has done a fairly decent job packing as much functionality it can into a mere mouse. As mentioned previously, customisation is completed by means of software available for download on the manufacturer’s website. While typically overlooked, the underside of the M.O.U.S. 9 also holds some tech, the updated laser sensor for starters. Since the mouse is wireless, it is powered by means of a 1.5v AA battery (and has an indicated lifespan of 1 year), and connects to the PC (or any other compatible device) by means of a USB-powered Bluetooth receiver. The receiver can also be housed in its own spring loaded fitment found next to the laser sensor.

The laser sensor is so sensitive that it is capable of working on any surface. While we can’t attest to the “every surface” terminology, it can be proven that it works even on glass, one for more difficult surfaces to work from, given its transparency. I have yet to experience any other laser or infrared devices that can trigger movement on glass, making the feat a little more impressive. The biggest downfall of the laser, however, is its low DPI at only 990. While this isn’t a gaming mouse, it is a point of concern considering the cost of the M.O.U.S. 9 at over R1,200.

Whereas the previous range of R.A.T. mouses included a slew of adjustability, some even with parts to swap out, the M.O.U.S. 9 is only adjustable by means of the palm rest. The R.A.T.9, for example, could be unscrewed leaving behind only the base. That sort of adjustment is what made people notice the Mad Catz range, and what lead them to purchase their devices, irrespective of its cost. The M.O.U.S. 9 was released in Q3 2013, but still offers just enough functionality for speciality users. This mouse isn’t the ideal solution for just getting through everyday functionality, as it the cost doesn’t drive the basic requirement. On the other end of the scale, it isn’t a gaming mouse by any means, so again it doesn’t fall into that category. It’s difficult to motivate the M.O.U.S. 9 as a solution that is half ‘everyday’ and half ‘gaming’, but that is exactly what it is.

The best use, then, for such a device is for advanced users who require additional functionality over the standard mouse, and at the same time require a little bit extra for the gaming needs, without being classified as a hardcore gamer. There are a few wired and wireless option available from other manufacturers that may offer more in terms of specific requirements, even a few from the older Mad Catz catalogue.