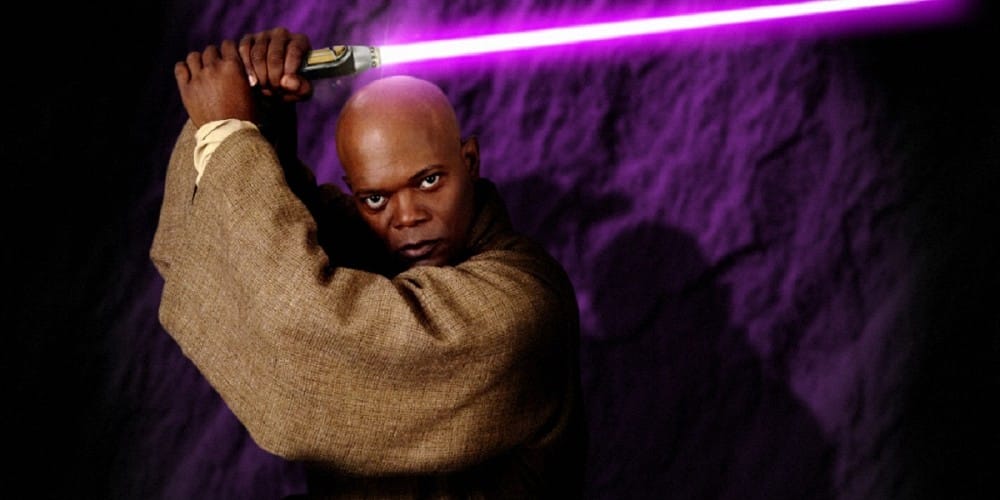 In 2005’s Revenge of the Sith, Jedi leader Mace Windu (Samuel L. Jackson) fell to his death after Darth Sidious uses force lighting to shove him out the window. While many presumed him dead, Samuel L. Jackson has another theory. Mace Windu is alive.

In a recent Twitter Q&A session, Jackson revealed that he thinks Mace Windu – the only Jedi with a purple lightsaber – “ain’t dead”. “In my mind, I’m not dead,” answered Jackson. “Jedis can fall incredibly high distances and not die.”

He later expanded on his theory in an interview with Entertainment Weekly.

“Jedi can fall from amazing distances. And there’s a long history of one-handed Jedi. So why not?” “But George doesn’t have anything to do with it anymore,” said Jackson, referring to Lucas’ sale of the Star Wars property to Disney.

But Lucas likes his theory: “George is like, ‘I’m okay with that. You can be alive.”

This theory begs a few questions: If Mace Windu is alive, where is he currently?

And will Disney be kind enough to resurrect the character?

Do they have any plans for Mace Windu?

In Samuel L. Jackson’s hypothetical Star Wars reality, Mace Windu is alive and has been lying low on some remote planet, just like Masters Obi-Wan Kenobi (Ewan McGregor/Alec Guinness) and Yoda (Frank Oz) did in the previous films.

What do you think? Is Mace Windu is alive?