Lords of Vegas Board Game Review – It’s Not The Richest, But The Smartest That Wins

Your family likes Monopoly but you’ve played it half to death. You’re looking for something similar but with a bit more depth or complexity. This is Lords of Vegas.

The board represents the Vegas Strip before it was the over-developed mess it is today. Each player begins with two plots and a certain amount of money, as decided by two cards. The better your plot positions, the less money you start with. It’s a balancing thing that means players begin on equal footing but their first actions may not be the same.

When your turn begins, you draw a card. This card indicates which plot you’ve received and the casino type that pays out. You mark the plot with one of your markers, and each player that has a casino of that type earns money or victory points accordingly. During your turn, you may build a casino, sprawl an existing casino to the adjacent property, remodel the whole thing, reorganise in an attempt to improve your hold or earning potential, and gamble at another player’s casino. Each plot you own will nett $1mil per turn, whether it’s your turn or not. When you build (paying the asking price printed on the board), you replace that plot token with one of the five available casino types. A die is placed on top to indicate the value of that space. If there’s a casino of the same type in an adjacent space, they merge and the player with the highest die value on any single space is in control of the whole thing. This is called the casino boss. By sprawling you pay double the asking price and expand your casino to the next space, however, someone later draws the card for that space it immediately becomes theirs with whatever is on it, so it’s risky.

Remodelling allows you to maximise the chances of your casino making money. There are nine cards for each type of casino. As they are drawn over the course of the game, the probability of a certain casino coming up will increase, so remodelling your casino to this type increases the chances that your card is drawn. There’s a limited number of tiles for each casino type so it helps to read things early. Reorganising allows all the dice in a specifically joined casino complex to be rolled. This can be done to increase the overall pip count of a casino or to take control of the complex and become the new casino boss. Why is this important? Because when a type of casino pays out, each player with a tile of that type earns $1mil per pip, so the higher the pips the more money. Here’s the kicker of the game: The casino boss earns victory points for each tile in the complex (of the correct type) that they are the boss of. Money is the facilitator, but to win you need to be the casino boss. The victory point track starts off simple enough, but soon players require points in sets of two, then three. This forces casinos to merge in order to earn more points and creates friction between players.

Lastly, there are four cards that “Pay the Strip”. Instead of a specific type of casino paying out, all casinos on the strip will pay out. This is usually a big jump in points and money and explains why the plots on the strip are more expensive than the backlots. One of these “The Strip” cards also signifies the end of the game and is inserted a few cards from the bottom, meaning as much as you card-count the different types of casinos there’s always the chance that the card you’re waiting for isn’t in the game.

A very important rule in Lords of Vegas is that almost anything can be negotiated or traded as long as it involves the active player and the deal is completed in the current turn. You’re not allowed to promise something for future turns or take out a loan, but other than that anything is possible. Lords of Vegas has the business appeal of a game like Monopoly but is much more free-form, not restricting a player to roll-and-move, but making actual decisions regarding their cash flow and possible expansion of their empire. Gambling elements are incorporated into the game nicely, but it’s by no means a gambling game. There’s probabilities, the baseline of any casino game, some of them calculable and others the luck of the dice. Social engineering and deal-making play a big role in the fun of the game.

Components: 3/5
I really don’t like paper money, but thanks to the theme of the game poker chips are highly recommended.

Gameplay: 4/5
Lots of player interaction, even when it’s not your turn. Analysis paralysis is a problem with some players, but this is helped by other players making suggestions and offering deals.

Complexity vs Depth: 4/5
The systems in the game are deliberately simple so players can try to predict them. This works for a game like this. Games tend to be under two hours. New players tend to be more cautious, while experienced players will come up with complex deals and plays to accomplish their goals.

Theme: 4/5
The gambling theme is brought through every mechanism in the game without making it a gambling game.

Overall: 4/5
A great gateway game with a compelling theme. 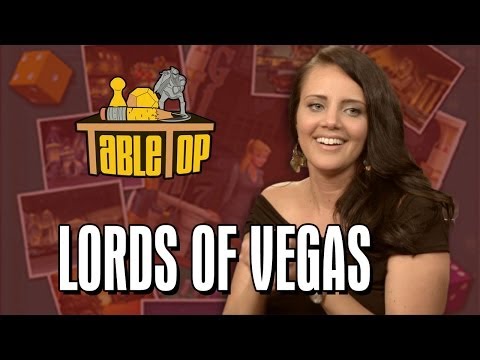