Looking back at… A Nightmare On Elm Street #8 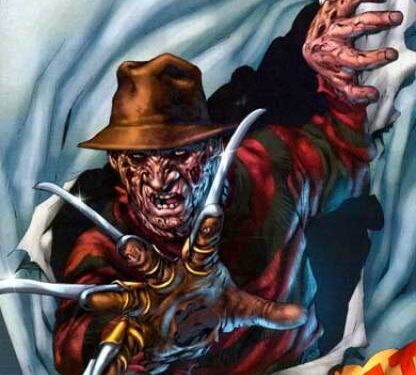 In their heyday, they were some of the most popular titles on the market and EC Comics releases like Tales From The Crypt and Vault Of Horror had a huge impact on the whole industry. These titles still mean a lot to some fans, although EC Comics suffered greatly during the whole Seduction of the Innocent/Congressional hearing debacle. These days, while horror comic books are still to be found in shops, they’re usually kept on the back shelves amidst more “mature” works like Maus and Sandman. But they’re out there if you look for them.

A Nightmare on Elm Street #8 was the last ongoing issue from DC, although the popular horror franchise has bounced around publishers for years. Fittingly it’s a stand-alone issue, focusing on fast food employee Dean as his boring, overworked life becomes too much for him and he starts to sleep… and dream. Naturally, his dreams are plagued with visitations from Freddy Krueger and you know how things are going to go from there.

Even in his dreams he’s at work, but in those dreams his boss is Freddy and the meat they’re serving in their burgers is coming from the kids of Springwood. He realises that their deaths in his dreams are happening in reality but is powerless to do anything about it and is too exhausted from work to even bother seeing how or why it’s happening. His state of sleep deprivation hits a breaking point when he finally can’t tell what’s real and what isn’t, before sleepwalking through the climax.

Yes, expect lots of blood and gore. Expect a little nudity too. This is a horror comic, and that means there’s bound to be some gross-out moments and exploitation. What else is to be expected from a Freddy Krueger story, especially one with the “suggested for mature readers” label? The question is if it’s actually any good, and the answer is a surprising yes… but within reason.

The art is solid enough and the story is one that most overworked, underpaid kids and adults can relate to if they’ve ever held down a joe-job. Chuck Dixon has always been one of the best, most underrated writers in comic books and he tells a pretty good tale no matter what he’s working on. While  this one is so short it would qualify more as a Freddy’s Nightmares episode than an Elm Street film, the final punchline is one which would make the old EC guys proud and sticks with the more playful, demented side of Freddy Krueger’s nature.

Sadly though there’s a lack of three-dimensional characters here. We don’t know Dean and he’s just another victim like so many from the films. In fact, Dean has so little impact on the story itself and is so instantly forgettable that even his own boss in the story keeps calling him Dan. Whether it’s a playful dig at the disposable teens in horror movies or not, either way we’re served a comic book strangely similar to the fast food in the story: it’s quick and easy to digest, but far from a satisfying masterpiece.

This isn’t the worst horror comic book out there but it’s far from the best, and the only real reason to get it is if you absolutely must own every piece of Freddy Krueger pop-culture memorabilia that exists.