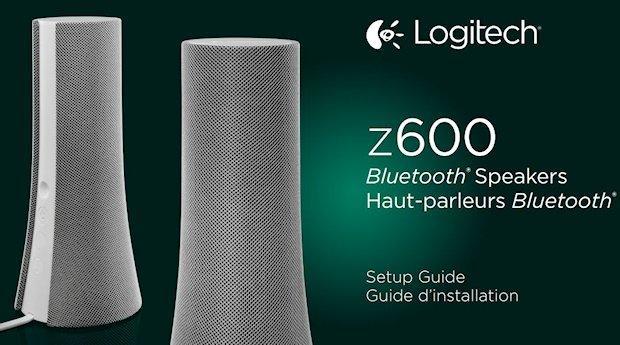 The average stereo, desktop speakers are an abundance on the market, offering quality from the very basic, and only just being branded as speakers, to the insanely over-priced and sleek looking sets, bought simply for its design over actual quality. Logitech offers a selection of stereo speakers, all of which offer at least ‘good’ sound quality. While desktop speakers are generally seen as stationery, being connected by means of a 3.5mm jack to your PC, Logitech’s z600 Bluetooth Speakers offers three different audio connections, depending on your specific requirement at the time. The z600 does not have a revolutionary design, but it is simple and elegant. The design is reminiscent of a tall vase, rather than your standard speaker. It comes in two colour variants; a matte silver and purple, both standard with a grey fabric cover. The silver-themed pair go well with most laptops and Macs, whereas the purple compliments your typical desktop PC. A black variant would have been a slightly better fit for the desktops though. The cover (grill), runs around most of the speaker, disturbed only for the controls on the right speaker; for which the design is mimicked on the left speaker for aesthetics in symmetry.

As stated, the right speaker houses the controls, which include the Bluetooth pair button, power button, 3.5mm auxiliary input, and microUSB input. A cable runs at the bottom of the right speaker to connect to the left speaker and power source. Setup for the z600 is easy, across all methods of connectivity. Your choices are the normal 3.5mm audio cable, standard Bluetooth, and A2DP via the USB Bluetooth receiver (for devices that don’t support Bluetooth by default), as well as a microUSB option for direct play.

To connect using standard Bluetooth, simply press and hold the Bluetooth button on the speaker for two seconds to enable other devices to find it. On your smartphone (for example), turn on your Bluetooth and under the settings do a quick search. Select the z600 and pair. The speakers can connect up to three devices at any given time. Switching between the three devices is as easy as stopping playback on one device, and starting it on another. Be careful to wait at least a second or two between each step. Using the Bluetooth receiver on your PC or laptop is just as simple. Once it’s plugged into the USB port, wait for Windows to automatically detect the receiver, and you’re all set. No funny downloads and installs here.

The controls are just as basic, while being more modern. To adjust the volume, Logitech has included a touch sensitive control mechanism on top of the right speaker. Volume can be raised by touching and rotating your finger (gesture based) clockwise, and lowered going anti-clockwise. Initially, there is a sticker to show the instructions on how to use the volume controls, which, when peeled off, reveals no evidence of any form of controls. Thankfully, the touch controls work flawlessly; something that often goes wrong, even with such a simple process. Interestingly, Logitech doesn’t advertise the speaker output, frequency, or wattage in any form; not even on their website under the specifications menu. It is confirmed, though, that each speaker has three drivers, nothing more specific unfortunately. Sound, then, will have to be judged by ear alone. Since it isn’t sold under the UE Logitech brand, we wouldn’t have expected anything to blow your socks off here.

Sound quality is good, but not without a few shortcomings. The bass output from the sound is generated beneath the speakers, which, under normal circumstances perform well. Turn up the volume, and the bass doesn’t match the sound output and remains relatively soft. In fact, a little distortion is picked up from the bass when the volumes are increased. One can only assume the bass isn’t as loud when the volume is turned up due to this distortion, and Logitech has purposefully kept the levels low. This isn’t a nightmare to listen to, but does mean that the sound quality isn’t as pure as it could/should be.

The speakers will do enough to fill a small-sized room, and have an output and clarity far superior to that of your average portable speaker and from your smartphone. In the end, sitting at your PC listening to music presents reasonable results, but when it comes to providing a more entertaining experience amongst a larger group of people in a larger environment, the speakers don’t quite pull their own. Logitech has an interesting description for their z600 speakers: “elegantly designed pair of wireless stereo speakers that complement the sleek good looks of Mac and Ultrabook computers.” Without actually seeing the speakers yourself, two things immediately spring to mind – designed for Macs, and over-inflated price. This isn’t the case, however, as the z600 are designed to complement almost any setup you may have. At around R1,500, pricing isn’t too bad either, although it cannot be considered as ‘affordable.’ You would then expect a little more in terms of what you get in the plastic build and design. It may look good, but doesn’t scream with any vigour.

Although it does offer three means of audio connectivity, the Logitech z600 isn’t fully portable. Instead, it offers your portable devices a means of audio output without the hassle of physical connectivity, using an addition of Bluetooth to transmit audio. Its sleek look and easy to use features make the z600 an interesting purchase for users who often use their mobiles to play their music, offering a single solution for both your desktop and laptop, as well as any other Bluetooh portables you have lying around.