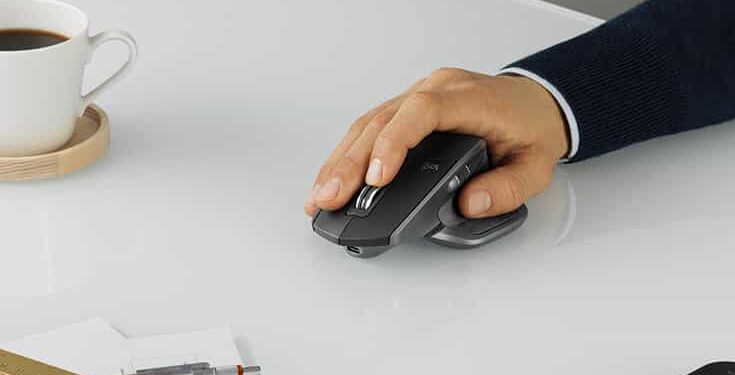 For some users, the now common mouse is a peripheral device that they pay little to no attention to, even while using the device on a daily basis, sometimes for hours on end. People don’t often spend a lot of time considering their daily driver, until they have to. There’s a lot more to the mouse than a simple two-button, point-and-click device. Once you realise this, you’ll soon realise what you’ve been missing. There are numerous features and additional buttons to make life simpler and allow for many shortcuts to make work a lot more efficient. 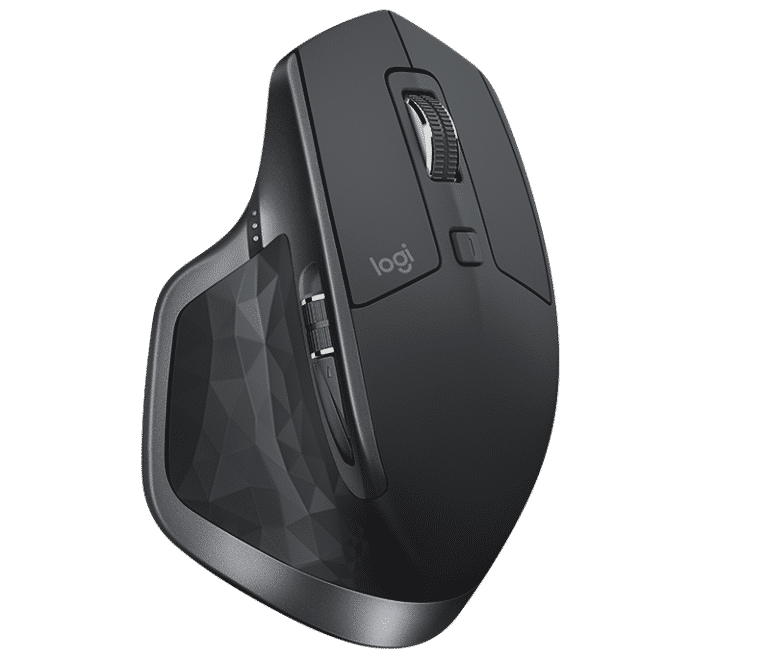 Logitech has been one of the best-selling brands for many years, while the MX Master range has also been a favourite and best-seller over the many different iterations. Having previously reviewed the Logitech MX Anywhere 2, I was excited to review the Logitech MX Master 2S.

When compared to the previous MX Master, launched three years back, the MX Master 2S doesn’t reinvent the wheel when it comes to the overall design. In fact, there are more similarities than there are differences, most of which you’ll need to compare side by side to notice any of the changes. There are two main changes, however slight they may be. The 2S has a slightly smaller frame and weighs a few grams lighter. There’s also a small change in the palm rest, but, again, you won’t notice this unless directly compared.

The overall size is still fairly large (weighing 145g) in comparison to many other peripherals, but with meaning. The additional real estate makes for a more comfortable grip, while also providing more accuracy as a result. The unit has a generous helping of rubber to go around, not just on the rubberised feet. The main body has a smooth rubber finish, while the thumb and pinky rests have a textured rubber finish for better grip. The rubber finishes are also surrounded by a metallic silver trim. The ergonomic design makes it very comfortable to use for any size hand, large or small, but unfortunately doesn’t cater for left-hand usage.

Apart from the conventional left, right and middle buttons, there are a few additions fitted to the unit. There’s a second scroll wheel on the left to scroll horizontally when needed, with the back and forward buttons positioned slightly behind it. There is a mode shift button behind the middle button/wheel. The unit allows you to switch between three different devices by means of a selection button, with LED indicators on the underside. Also fitted to the bottom is the power on/off button. Lastly, there’s a hidden, gesture button, which can be activated by depressing the rubber thumb rest. It is worth noting that these are the default actions for each of the buttons, all of which are customisable via the Logitech Options software. In addition to the numbered LED indicators below the device, there’s also a second set of LED indicators (x3), which indicate the current speed/DPI setting of the 2S.

Similarly, to the original MX Master, the bottom of the unit has a fairly unique approach with two huge slits. This means that there are three contact areas on the 2S, the two outer ‘wings’ as well as the centre slit, which houses the LEDs, buttons and sensor, while also having two feet at the top and bottom ends. The reduction in surface area at the bottom means less friction and drag when in operation, providing more accuracy when in use. Marketed as a production mouse, this makes quite a big impact on the performance. 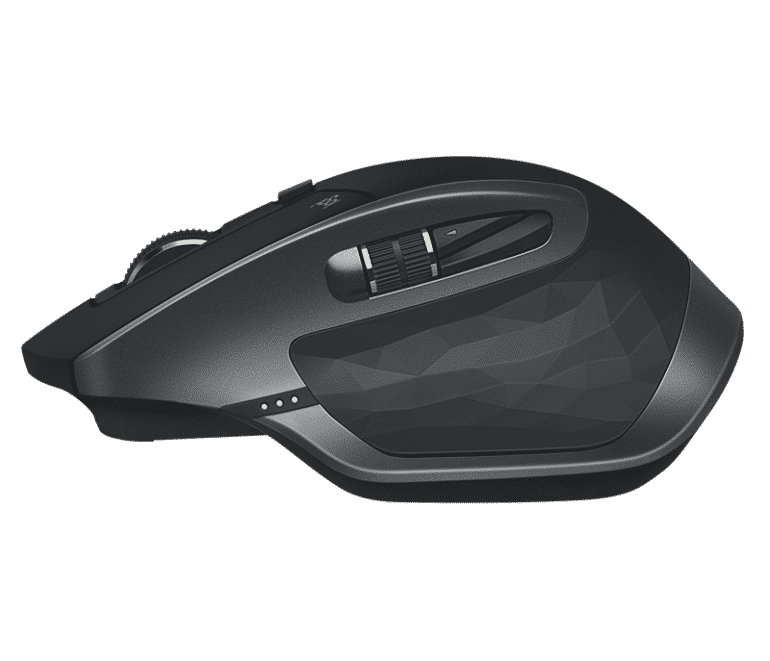 Most of the updates on the MX Master 2S aren’t visible, with major improvements to the inner workings of the device. For starters, the 2S is fitted with Logitech’s Darkfield Laser technology. This allows the 2S to work well even on high-gloss or transparent surfaces, which opens it up to be used on glass. Logitech already boasted this technology on the MX Anywhere 2, which I found extremely impressive. The update in technology has also pushed the maximum sensitivity of the 2S from 1,600dpi to 4,000dpi. This makes for extremely accurate tracking even across larger or multiple screen environments.

One of the more important features of the 2S is the inclusion of the FLOW system. At its most basic, FLOW will allow you to connect up to three computers concurrently. Moving the cursor off the edge of one computer will allow it to pick up on the next computer. This means you can seamlessly switch between the three devices without needing to press the connection button underneath. Where the FLOW system really comes into its own is the ability to copy and paste files and text across the same three computers using the mouse, without having to directly connect said computers. This is an extremely useful feature. It’s important to note that users will require the Logitech FLOW software on all connected devices to make use of this feature.

The mouse is comfortable to use for extended periods at a time and you can quickly move to various surfaces and maintain the same level of operation as on the standard desk environment.

I also managed to connect three different types of devices at the same time – a laptop, smartphone and smart TV. Well, the same edge switching wasn’t available for this type of setup, it was still quite easy to switch between the devices connected using a mix of Bluetooth and the Unifying USB receiver.

The overall performance of the MX Master 2S was nothing short of great. There were little to no glitches once you’ve successfully setup the mouse. The mouse is comfortable to use for extended periods at a time and you can quickly move to various surfaces and maintain the same level of operation as on the standard desk environment. The default setup is also good enough and I felt that customising the buttons wasn’t really necessary apart from conducting a few tests. While there is an option to switch the modes of the scroll wheel, the unit also includes an adaptive switch, which allows you to perform an infinity scroll if you flick the wheel fast enough.

Another of the outstanding features of the 2S is its extremely long battery life. For continuous use, Logitech has tagged the unit as having a 70-day battery life on a single charge. Upon receiving the unit, I completed a full charge. Having had the opportunity to review the mouse over nearly two months, there has been no indication of the mouse needing a recharge, even while I purposefully left it on during the time frame. The unit goes into a sleep mode when not in use for an extended period of time, which limits the amount of battery waste. In addition to the long battery life, it also sports fast-charging support, which provides users with a full day’s battery life within 60 seconds. 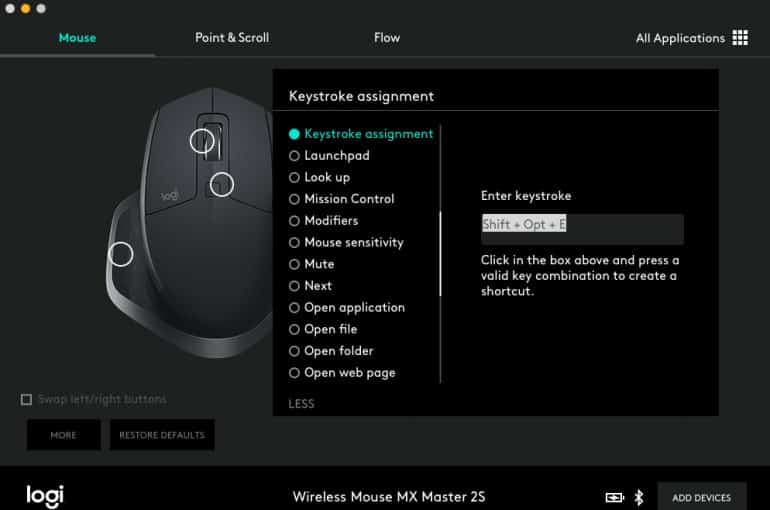 While the Options software is fairly basic, it was my only gripe about using the 2S. During my testing, I required to install the software across three devices in order to make use of the full feature set, as indicated above by means of the FLOW system tests. The issue I picked up is that the software isn’t able to install on older generation computers. From the results, I wasn’t able to install the latest Options software on any 7th generation Intel chipsets or older. This meant that I had to install an older version of the software, which then only provided me with basic connectivity options.

Once setup, however, the software was fairly easy to use, allowing me to customise any of the buttons on the MX Master 2S, as well as the environment to allow for additional features. 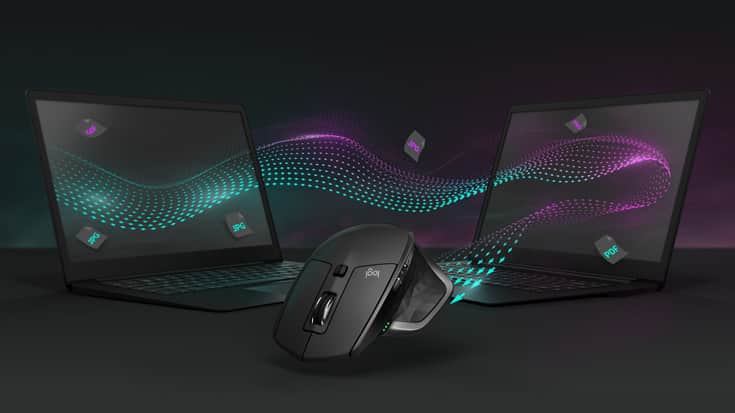 As with many of the high-end Logitech products, the MX Master 2S is very well thought out product, which delivers great value for money. It may not deliver all the features required for a gaming setup, nor does it wish to, but it’s a very good, all-round mouse aimed at productivity. From the accuracy on almost any surface to the inclusion of the multi-computer support via the FLOW system, there’s a lot to love about the MX Master 2S.

The unit isn’t the most affordable at R1,599, but it has great value, especially for users that are required to use multiple computers, which often require multiple copy-and-paste functionalities across the network. While it may not be the most lightweight or best-looking device, you won’t have any qualms about comfort when in use.

If you're in the market for a new mouse, or even if you're not, the MX Master 2S is a great choice.