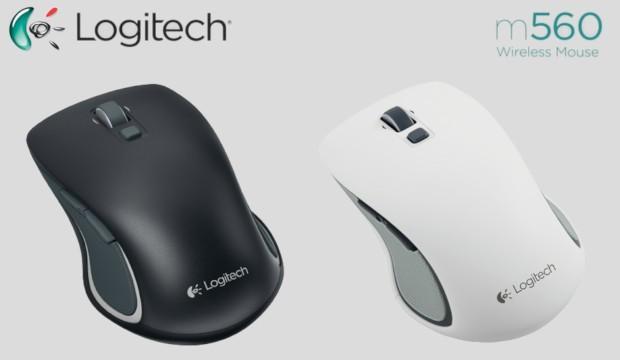 Over the past few months, Logitech has placed quite a great deal of emphasis on its range of gaming peripherals from its G-series. The company has developed some of the more popular mouse, keyboard, speaker and other peripherals in the past, and has a device for almost every situation and pocket. The Logitech M560 Wireless Mouse was released recently, and is an extremely customisable mouse, designed for Windows 8. The Logitech M560 Wireless Mouse looks good from almost every angle, thanks to its sleek build and contoured finish. The mouse itself is fairly diminutive, which measures 10.8×6.7×3.9cm and weighs just under 100g. Due to its size, the mouse doesn’t provide any support for the last two fingers, which are often left to drag along the desk surface when sliding the mouse. This alone clearly states that the mouse is not suitable for gaming by any means.

The mouse is designed to be ambidextrous in its use; its symmetry only broken by the positioning of the thumb buttons (for right handers). The deep contour is finished with a continuous grey, textured, rubber strip that runs from either side beneath the front buttons. The left and right click buttons are extensions of the device’s body as it continuous from the back without interruption. The wheel and (programmable) square button are situated on the front-centre, adding to the symmetry. The M560 has a matte finish, which comes in black, white and silver colour variations. Although it may look good on the eye, this often leads to it collecting dirt quite easily, making it look and feel cheap at times. The M560’s claim to fame is its comfort and control using Windows 8. Although the device is fully compatible with previous versions of Windows, the best performances are observed using Microsoft’s latest OS. The mouse was designed to make use of a few of the OS’s tricks without the need for a touchscreen, which sometimes are a little tricky to have a handle using conventional methods. A number of Windows 8 shortcuts can be carried out when selecting the square button in conjunction with another action. For example, pressing the button and swiping right will reveal the Charms Bar, whereas swiping left with bring up the Apps Bar. If you use the mouse’s default setting, the front thumb button will toggle the Windows 8 Start Menu, while the back button minimises all open apps. Similar actions are observed in Windows 7 and Vista, but you’re better off customising the buttons to be used as back and forward browser buttons. One of the biggest gripes I had with the M560 is the sensitivity of the scrolling when using the wheel, whether it be in a browser or Windows file explorer. Tinkering with Logitech’s SetPoint software negates the sensitivity somewhat, although it doesn’t remove the annoyance altogether. There are even plugins for Chrome and Firefox to reverse the scrolling issues, and while it made things a lot smoother, scrolling was far too slow. For persons with slightly larger hands will also notice that attempting to click the square button can sometimes be uncomfortable and cumbersome to reach without repositioning your grip, and then back again before continued use. The Logitech M560 is priced at around R450.00. The device itself is stylish in design and of good build quality, although the matte finish needs some revision to avert easily collected dirt and fingerprints. While the default button functionality makes using Windows 8 a little easier, the buttons a fully customisable. The biggest concern I would have is that the device is priced similarly to that of the entry-level G-series mouse, G100s. A few extra buttons and features would greatly increase the M560’s value against other devices, as it, ultimately, doesn’t do much to stand out from the crowd.