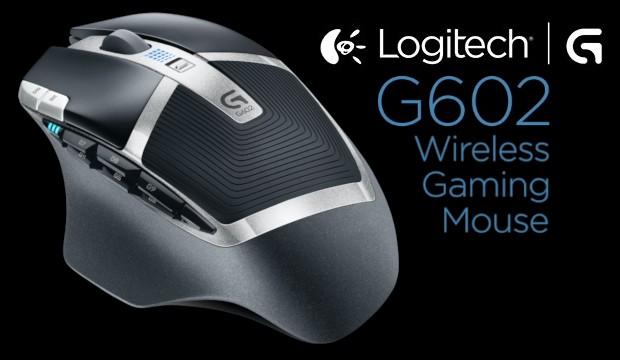 The mouse has long since evolved from the two-button (even three) device of old. Moreover, gamers have sought out even higher standards for the mouse of their choice; nit-picking on everything from the amount of buttons to the device’s weight. Logitech has remained at the forefront of technology in this field, including a host of options for many a need. The Logitech G602 Wireless Gaming Mouse is a wireless, battery-powered mouse aimed at gamers, which offers an extended lifespan on a single set of batteries. Although Logitech already offer a similar mouse in the G700s, there’s quite a few differences in the G602. The most obvious of said differences is in the design. There’s no denying that the G602 looks far more appealing than the G700s. The G602 manages to look sleek and aesthetic, even with all its features and 11-programmable buttons. The left and right click buttons protrude quite a long way past where your fingers are able to reach, giving it a sharper, bladelike design. The grey strip that runs between the buttons house the scroll wheel, as well as a button that allows the user to switch between gaming and endurance modes. While this button isn’t customisable, the other 11 buttons, including the left and right click buttons, are programmable to the user’s liking, by means of Logitech’s Gaming Software. Six of these buttons run along the right side of the device, easily accessible to the thumb. While these buttons are of great significance for macros and keybinds during MMORPGs and the likes when gaming, it does take some getting used to, as it would with any new configuration. The remaining two buttons are located above the left click button, allowing the user to switch between DPI sensitivity levels, which can also be pre-programmed. The G602 has a ridged and rubberised palm rest, while the sides have a grippy coating (much like the hydrophobic coating of the G700s), both of which assist during gaming at extended intervals. The materials used to manufacture the G602 are of the highest quality, and even after prolonged use are extremely resistant to fingerprints. The bottom of the mouse is usually not for design consideration worth discussing, but the G602 sports a web-like pattern below, some of which are rubberised for more accurate movement. One of the segments of the pattern is removable, housing the batteries and able to store the wireless, USB “Unifying” adapter. There’s also an on/off button located below the device to save on battery power while not in use. While it may look the part, it is of little importance to gamers who expect more in the line of features and performance to ultimately decide which to choose. The G602 has an expected battery life of 250 hours of continuous use on a single pair of batteries in its “Performance” mode. Switch over to the “Endurance” mode, by means of a simple button toggle, and the battery life increases emphatically to a length of between 1,100 and 1,400 hours. The switch is confirmed by means of a changing in colour of the LEDs from Blue to Green or vice-versa.

The G602 features the same Delta Zero sensor as the other rebranded Logitech Gaming mouses, which provide a sensitivity between 250 and 2,500 DPI at a rate of 2m per second. Many hardcore gamers tend to steer clear of a wireless mouse, but Logitech USB adapter offers latency-free, interference-free connection, even when switching between different sensitivity options.

There are many who have complained about the G602’s weight, which is a direct result of the use of batteries to power the device. Interestingly enough, if you remove one of the batteries from its slot, the device will still function as per normal. With a recommended retail price around the R1,200 range, the Logitech G602 is slightly more expensive than the G700s. The G602, however, has a lot more going for it apart from just a better design. The device has an overall better performance than the G700s, and while it doesn’t offer the same recharging functionality (via a USB cable), it should be the preferred option amongst gamers, myself included.