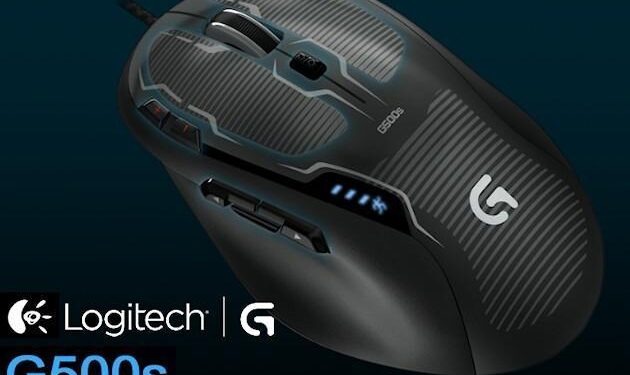 While Logitech is a well-known household brand for computing peripherals, its gaming range is well established for its selection of “best-seller” devices. Across Logitech’s new G-series range, there are quite a number of peripherals to choose from. From the entry level G100s to the G700s and G602, there is a substantial selection if you’re on the market for a new gaming mouse; all depending on your type of requirement. The Logitech G500s Laser Mouse may be a middle child from the range, but has a number of features that might draw your attention, despite not offering a wireless interface. Logitech has spent a great deal of effort on research, which shows up in their redesign of each of their upgraded products. There are no shortcuts or cheap plastic finishes here either. The G500s feels good to the touch with its textured, tactile surface on the sides for easier grip during gaming. This comes into play with prolonged gameplay in a single sitting, as non-textured surfaces tend to become less ‘grippy.’ We have the ‘oleophobic’ coating to thank, which prevents sweat build up. This grip, however, does take some getting used to upon first use. There are 10 programmable buttons in total on the G500s, which makes for better overall functionality. Unlike the G700s, the G500s is designed more toward first-person shooters. There are less buttons to contend with, and simpler design for quicker and easier to remember actions.

As with the G500, Logitech has included a useful customisation factor with the G500s, in that it has an adjustable weight cartridge located underneath, with 12 separate weights categorised into two sizes; 4.5g and 1.7g. There are six of each weight group, with the cartridge being able to house six weights at one time. The maximum additional weight, then, is a total of 27g, which make a significant difference in gaming performance. Too light and the accuracy may not where you want it to be, and too heavy for some users would affect the movement speed. Research would suggest the gamers tend to use the maximum 27g for best results. As with the other peripherals in the series, users are required to download the Logitech Gaming Software to fully utilise their devices above the default Windows settings. Although the software is extremely basic, it performs its function quite effortlessly, with easy setup and customisation that doesn’t require a manual to wrap your head around. The ability to switch between mouse sensitivity is of great significance to gamers, where different scenarios require different levels of accuracy and speed. Users can pre-set four different sensitivity settings for their profile, which is indicated by the blue LED lights on the left side of the mouse. The sensitivity rangers between 200dpi and 8200dpi, as well as polling rates between 124Hz and 1000Hz.

In addition, I also found these features handy for use outside of the gaming environment, such as graphic design, where single pixel movement is often required. Logitech’s Angle Snapping capabilities also allow for more accurate cursor movements for design purposes. This feature allows users to make straighter, linear movements (as with drawing straight lines), as it negates slight sideways movements when enabled. The Logitech G500s, on paper, hasn’t evolved much over the G500. With only an updated sensor and new paint job, the general performance and enjoyment during use mimic that of an entirely new mouse. The G500s, then, is one of the stand out devices from the updated G-series range, and would definitely by my choice of mouse (thus far: we still have a few more to get through before the end verdict). The obvious improvement on the G500s would be to add the wireless support, but the issue, then, is that it replaces the G700s. At a recommended cost of R800, it isn’t the cheapest around, although it is quite well-rounded for that price. Unless you’re more of an MMO gamer (for which Logitech offers other specialised products), you won’t regret your purchase, even after copious hours of straight gaming.