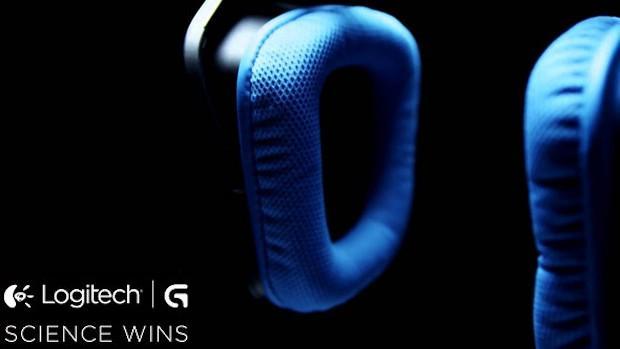 Logitech’s G-series update has garnered a fair amount of media attention since the launch a few months back. The company, already well known gaming peripherals such as keyboards and mouses, has also achieved some level of success with their range of headsets. The Logitech G430 7.1 Surround Sound Gaming Headset is the company’s flagship device in this category, and is geared toward adding a new dimension to your gaming sessions. At a recommended retail price of R1,149.00, we find out whether it’s worth the price tag. The Logitech G430 immediately grabs your attention with its black and (luminous) blue colour scheme. This often suggests that the device means business, or simply trying too hard. The foam ear cups are covered in blue cloth, which can be removed for washing, or replaced when worn. While the cloth finish, opposed to the more expensive leather, comes across as less premium, it is anything but mediocre and offers some level of comfort for prolonged use. The one downside about the ear cups is that they fit quite snug around your ears, and although it is able to provide a decent amount of comfort, you should not expect to keep them on all day, as you may lose some feeling in your ears. Unlike the more premium Logitech headsets, the G430 doesn’t include programmable buttons on the outer part of the cups.

The adjustable cups are able to rotate through 90 degrees, which makes it easier to store flat in your cupboards when not in use. The microphone, too, is adjustable, both horizontally and vertically. This enables users to adjust for the best positioning, as well as flip it all the way back when not in use. The cable measures around 2m in length. Thankfully, the braided finish reduces occurrences of tangling due to its length, and a useful Velcro strap is also added along the cable to easily fold away excess cable when there isn’t a need to fully extend the full 2 metres. On the technical side, the Logitech G430 is fitted with 40mm drivers, with 32 Ohms of impedance, a frequency response of 20Hz to 20KHz, and a sensitivity rating of 90dB SPL/mW. The headset is labelled as a surround sound headset, and features 7.1 surround capabilities. To make use of the surround sound, though, you need to install the PC software (not available for Mac). The G430, then, is primarily meant for PC usage, although it can be used where any 3.5mm audio jack is present, although without the 7.1 capabilities. While playing supported games, the surround sound delivers quite respectable results, as it was easy to know from which direction each sound originated, especially in modern games such as Bioshock Infinite and Battlefield 4. The quality and clarity of the sound remains true at higher volumes, even with the bass turned up. In addition, increasing volumes won’t disturb those around you as it blocks any noise from escaping the large blue cups. The only real trouble noticed was when the bass was turned up to max using the PC software, as a slight distortion became present. In all honesty, I would not recommend listening to any sound through the headset at the level at which the distortion became noticeable.

The microphone is an essential part of a modern gaming headset and shouldn’t be overlooked by any means. Logitech’s G430 includes noise-cancelling technology with its microphone, which promises to provide clearer voice quality to all recipients, even in the noisy conditions you find at LAN parties. Voice clarity on the G430 remained good under different situations, and the only negative was a slight lack of bass in the voice. This, however, is of little consequence when there is often screaming and shouting in heated online gaming situations. It may not be recommended for voice recording on its own, but this is a gaming headset after all. As with all the other Logitech G-series peripherals, to make full use of the device at hand, you need the PC software. Once you’ve completed the download via the Logitech support site, you now have access to the 7.1 surround sound capabilities of the headset, along with some audio fine tuning. The control panel allows you to adjust volumes for each of the different Dolby 7.1 surround sound channels available for the headset. Although useful to have, there are limited situation where users should be required to adjust the left rear volume over other channels, unless certain situations made these inaudible. Additionally, users can also adjust the bass and treble, overall volume and microphone levels. Unfortunately, the software isn’t supported by other operating systems, the likes of Apple’s MacOS and Linux. Although they will work, once again, it isn’t quite something you would spend as much money on to only enjoy stereo sound. With the increased gaming presence on these platforms of late, this is a significant omission from Logitech. While R1,149.00 may seem quite pricey for the South African market, a good pair of surround sound headphones don’t come cheap. The Logitech G430 headset is definitely worth the cost, especially when you consider the 7.1 Dolby Surround Sound capabilities. The headset is by no means perfect, but performs well above average on all accounts. A simple port of the Logitech Gaming Suite to the different platforms, and a setting to remove the pressure from the ear cups and you’re just about set the standard for headsets in the same category.