I recall the first gaming steering wheel I owned as a kid. It was a novelty. While the design and features are somewhat laughable now, the drivers were difficult to find with the steering angle and button configuration was difficult to setup on our PC, it provided quite a lot of fun for the family. It was something all our friends always wanted to test or play with when they saw it. Even then, at around R500, the steering wheel was quite expensive when considering other toys and devices at the time. While there have been quite a few advancements in steering wheel technology since then, it often comes at a price for the real quality units.

Logitech’s G29 Driving Force Steering Wheel aims to provide users with quality options for great simulation driving, which includes the steering wheel with a large combination of buttons, a 3-pedal board, and additional Driving Force Shifter thrown in. Logitech has been creating simulation-based devices as long as I can remember and the release of the G29 is the spiritual successor of its best-selling G27 steering wheel.

One of the great aspects of the G29 is its build quality. It’s quite impressive actually. The design is based heavily on real world racing steering wheels. The wheel has a 27cm diameter, which gives it a comfortable feel and is finished with high-quality leather right around. While many other competitor wheels have a more rubberised approach, the genuine leather makes for a great experience. Even before you use any of the buttons or other additions in an in-game scenario, the touch and feel of the wheel make it a really impressive unit. The quality provides a level of comfort that the wheel won’t break under heavy usage and built to withstand quite a lot of punishment.

The unit is specifically built for the PlayStation and includes all the necessary buttons to use the device without the need of the PS controller. These PS buttons, however, are bolted on in such as manner that it looks somewhat as if it wasn’t really meant to be there, and was only added to appease its PS license moniker. As a PC user, I didn’t mind them so much since they were never really used of in the way, but perhaps an option to remove them as an attachment would be something worth considering. To be honest, most of the other buttons weren’t all that useful either. If you’re going to be racing a simulator game, you don’t have the need for too many buttons, simply use the wheel, pedals and choice of the shifter or on-wheel flappy paddles. There is the argument that some changes to driving preferences, etc. in real world racing are done on the steering wheel, such as with F1, but not many games support this level of realism and therefore isn’t a necessity on most wheels. 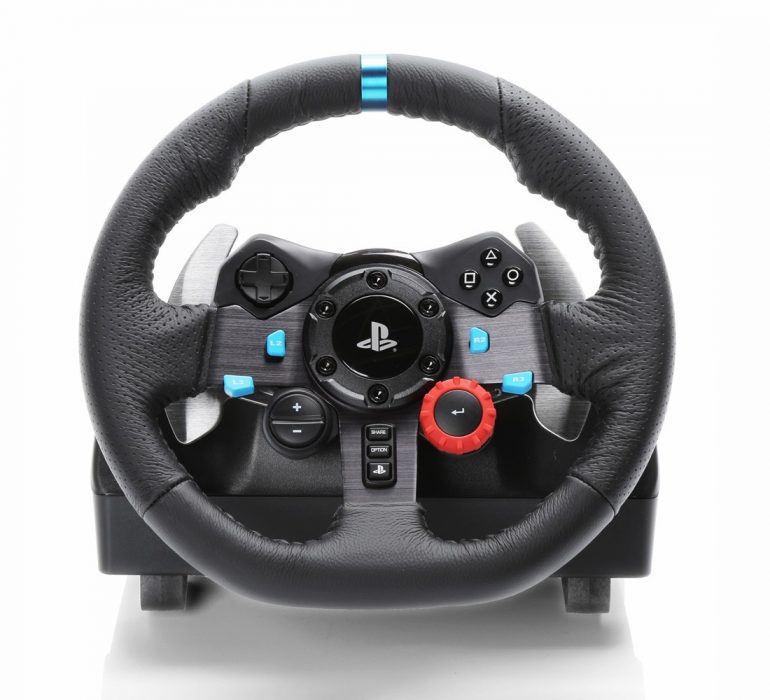 The G29 is a licensed PlayStation device, with support for both PS3 and PS4. Users can switch between the two consoles by means of a switch on the top of the unit. If you’re the proud owner of an Xbox One, you may consider the G920, the G29’s blood relative, although with slightly fewer buttons. The great thing for PC owners is that both wheels are compatible with Windows PC, with full driver support via the Logitech software. There’s no real need to further set up the controls on either the Logitech software or in-game, not unless you want specific custom controls, as the device is simple to setup and use in terms of the software and drivers.

Initially, there were only two simulation games that fully support the G29 capabilities, one being Driveclub, and the other being Project CARS, which I used for my testing. There are a lot of settings within the game to fine-tune your steering wheel setup based on preference. The wheel also includes a LED RPM indicator to determine gear changes. This is a nice to have actually, although the rev counter is also still visible on the gaming monitor unless you wish to turn it off as a result of the on-wheel display. Currently, there are only five games that fully support the G29, with over 10 for PC. I’m a bit curious, then as to the large PS marketing presence for the device.

Unfortunately, as with most other steering wheels, the G29 relies on a firm desk, or similar, in order to be mounted and screwed tight. Due to the aggressive force feedback, it is preferable to have a sturdy and thick surface to mount on to avoid shaking and possible dismounting as a result. The shifter also suffers from the same mounted approach.

The pedals, on the other hand, have a much more thought out design, with an option of carpet grips or rubber feet for tiles. This makes it easy to use and allows for a more sturdy feel while driving and continually pressing down on the pedals.

In terms of cabling, the majority stem from the pedals as opposed to the steering wheel base. This makes it easier to position and connect without getting in the way of your gaming. There are three main cables, one for power, one to connect to the PC via USB, and another to connect to the base. These cables are preset onto the pedals, it’s a simple plug and play approach and ready to start your engines. In fact, you don’t really need the Logitech software to fully utilise the device, only to remap some of the buttons if you choose.

The wheel has a 900-degree rotation and is equipped with a dual-motor force feedback. In addition to this, the base also includes a helical gearing system, which closely resembles what you’ll find on modern car transmissions. The level of complexity extends even further with the anti-backlash hardware, steel ball bearings within the wheel shaft, and a Hall-effect steering sensor to track the movement of the wheel. This all combines to create a smooth, yet realistic driving experience and it pays off brilliantly. The downside of using the Helicon approach, however, is the lack of feedback when driving straight. It may seem odd to make this statement, but when you consider a racing car driving at speeds in excess of 300kmph down a long straight such as Le Mans, you wonder if a smooth ride is something those drivers enjoy on a Sunday morning nearing the end of a 24-hour race. I wouldn’t expect that is the case. That said, there is a lot of feeling and feedback from road textures during turns and zones away from the set deadzone, and even the tiniest on-track detail may be picked up as result.

The 3-pedal board system is also well-tuned, with each of the pedals having their own pressure sensitivity and firmness, resembling the real tensions on the brake, accelerator and clutch pedals. The pedal configuration is said to be based on the Subaru WRX in terms of the design and pressures, which is not a bad configuration to have by any means. The brake resistance is arguably the most realistic and most welcome feature on the pedal board.

The addition of the optional shifter was also a great touch and feels pretty much like a normal gear shift. The only downside I picked up from the design was that when pressing the gear lever down to engage the reverse gear, I’m still able to select 3rd and 4th gears, as well as the reverse gear, which I found rather odd. I was unable to engage some of the other gears while depressed, which makes me wonder how there could be such a glaring omission. Still, I liked the overall feel of the gear shift. The Logitech G29 Driving Force Steering Wheel is really a great device to own for racing simulator enthusiasts, although it isn’t the perfect device by any means. There a few better-equipped wheels available on the market, although the prices will push towards an investment rather than a normal purchase for an average buyer. At an RRP nearing R5,000, the G29 is also at risk of falling into this category, but the price is somewhat justifiable given some of the great features and additions.