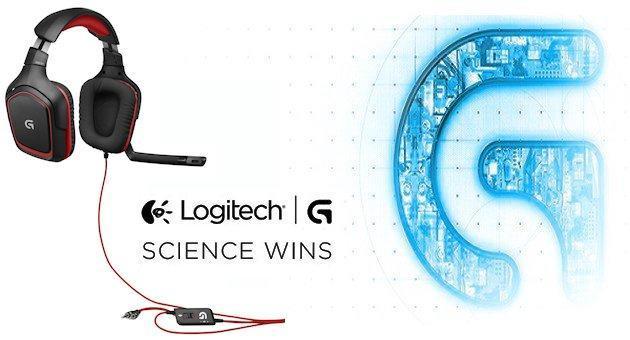 Logitech has been around for quite a long while now. Back in January, the company rebranded the G-series and revealed plans to redesign the associated lineup of gaming peripherals and accessories. Shortly after that, they officially announced the updated range keyboards, mouses and headsets. The Logitech G230 Stereo Gaming Headset is the entry-level headset in the series, which offers quite a bit of functionality. The question is whether a base model headset does enough to satisfy gamer needs. At first glance, one would think that the design of the G230 is quite intricate, but upon closer inspection, a more simplistic design is revealed. There’s actually nothing over the top in terms of its look, but does well enough to impress. While many other gamer headsets have a more aggressive and gaudy appearance, the G230 is more refined and minimalist, relying instead on obscure angles and colour schemes for the same effect. The earpieces can swivel a full 180 degrees; even though there isn’t a real need for extreme levels of rotation unless for storing it safely. The more preferable feature for gamers would be a wireless connection, a 2.3m cable will have to suffice for the G230, which allows for some manoeuvrability.

Since this is a gaming headset, it is essential that the G230 withstand long hours of gameplay without the user having to suffer any type of irritation, especially around the ears. Even with its large appearance, the headset isn’t heavy at all. With its “sports performance cloth,” there is some indication that the team at Logitech knew what they were doing, even if the G230 is somewhat of a ‘budget’ headset compared to its siblings in the series. The earpieces are also removable, which allows them to be washed after many hours of extensive use, which is very handy. Design may be an important factor to some, but it’s the audio and voice quality of a gaming headset that makes or breaks it. Since the headset is equipped with only two inputs, 3.5mm audio and microphone jacks, and no external power, there was no great deal of expectation when it came to surrounding noise cancellation. Despite being labelled as a ‘gaming headset’, the G230 provides a balanced audio setup for both music and games. This does, however, mean that in-game audio isn’t anything mindblowing, but does sufficiently well with the range of stereo sounds to pass the test. Sound for more conventional uses such as music, Skype, Hangouts, and other basic games (puzzle, adventure, cards) will result in a better experience. On the odd occasion, the level of bass seemed insufficient, which can be picked up easier when comparing music tracks on different sound sources.

The G230 offers noise-cancellation and folding capabilities for its microphone, which is quite common these days. The on-cable controls include a mute switch and volume dial, providing quick adjustments when needed. The biggest concern I have is whether the headset is truly a gamer headset, when it actually caters to a lot more variations in sound, while not being overwhelming with gaming audio, especially softer ambient noises. A quick change in its title, however, and you’re left with a really good quality product. Pricing for the Logitech G230 Gaming Headset is below the R1,000 mark, which is a reasonable price point considering all its included features. The all-round quality of the headset makes it an ideal purchase.