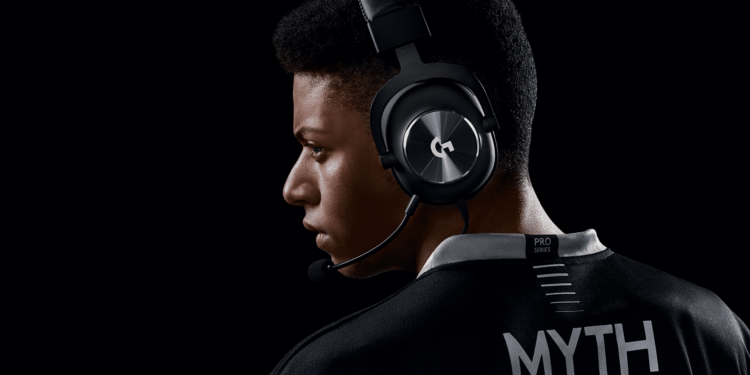 In 2018, Logitech launched its latest gaming headset range, with the Logitech Pro. Unfortunately for the brand, the Pro was met with mostly negative reviews, many of which questioned its quality, price and “Pro” moniker. A few months after the failed first unit from the new range of professional gaming headsets, Logitech acquired the audio company Blue and with it their microphone and headset division. We can’t say for certain that the talks weren’t already in the works well before the reviews of the Pro were released, but the timing does leave a lot of room for discussion. At the same time, however, Logitech introduced its latest range of another gaming range, this time from the lower G collection. Having reviewed a pair of the G432 Surround Sound Headset, the results were a lot more favourable across the globe. With the integration of Blue into the development process, Logitech has relaunched its Pro range with the Logitech G Pro X Gaming Headset, the first device to launch with the newly acquired Blue. Logitech refocused what the Pro range means, both internally as well as to the many fans of the brand. With the opportunity to review the latest in gaming headsets from the brand, we take a closer look at how much has changed in the year since the original launch, with a specific focus on the three key areas: looks, quality and value for money. More often than not, users would have to do a side-by-side comparison of two devices from the same range between two iterations in order to tell them apart. Designs aren’t typically revolutionary between said iterations, but there’s a massive difference between the first and second iterations of the Logitech Pro range. There was clear reasoning behind the decision to overhaul the look and feel of the Pro headsets, and Logitech has done a really good job adding a lot more of a premium feel to the Pro X, while still keeping some resemblance of the previous model.

While it may be labelled as gaming headsets, the lack of an RGB LED lighting display, you’d initially wonder whether this is really the case. Instead of the flashy colours, however, Logitech adds more class to the design, opting for an all-over matte black finish, with two metallic circles on each earcup, along with an embossed “G” in the middle of that. The metal components continue with the framed forks beyond the headband, although in a more subtle matte black finish. In addition to this, the leatherette padding on the earcups as well as on the headband. While most designs tend to try and hide the cabling to make it appear a lot sleeker, the curly cabling from the headband to the earcups adds quite a lot to the overall look.

The matte black finish contrasts against the metallic circles on the earcups, but also does a great job of repelling fingerprints.

The matte black finish contrasts against the metallic circles on the earcups, but also does a great job of repelling fingerprints. While there may be a hint or two of said fingerprints, over the course of a few weeks it’s easy to expect quite a bit more, which isn’t the case at all. It may not be self-cleaning, but it’s almost as good.

The earcups include memory foam, which adapts to any ear and head shape for the most comfortable of fits. They’re also soft enough to prevent any strain on your ears after a few hours of use. The cups create a bit of suction around the ear once places, which isn’t quite noise-cancellation levels, but does a good job of keeping quite a bit of the ambient noises out. That said, it does get a bit hot from time to time. It isn’t unbearable or uncomfortable, but you do notice the difference over time, especially on the hotter days. Logitech has added a spare pair of earcup covers in the contents, which are fabric instead of the default leatherette pair. These are a lot cooler overall, but you don’t get the same suction effect, which is of great value in noisy environments. There’s a nice touch added to the inner side of the earcups, the letters “L” and “R” printed on the fabric, rather than revealing itself on the outer cups.

At 330g, the headsets are a bit on the bulky side, but not so much to make a big deal about it. Once you connect all the cabling and microphone, the weight goes up a bit, but only a bit. Overall, the build and quality of the Logitech G Pro X is a lot more up to par than the previous iteration, worthy of the name. It may not be the over-the-top colours and patterns we’ve come to expect in modern gaming headsets, but it has quite a bit of a class finish to it. 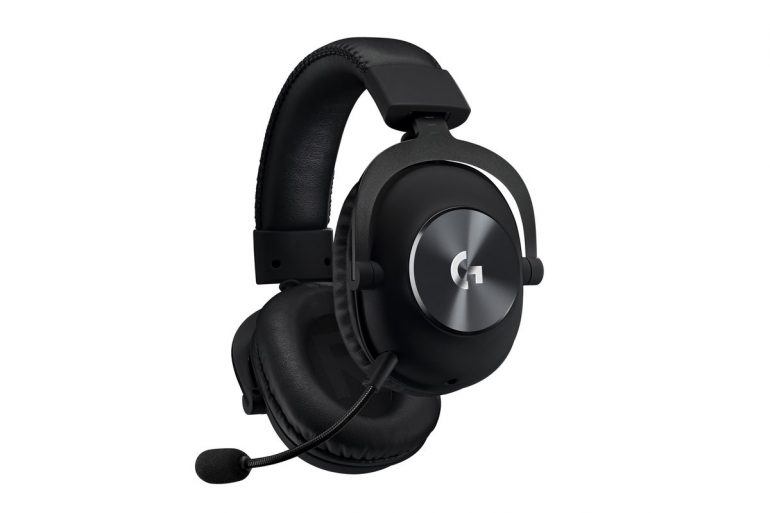 Some of the more noticeable features are aided by the design of the Logitech G Pro X, specifically the available attachments. The first of these is the cabling options. For use without the microphone, you can select the single-input auxiliary cable that attaches to the left-hand side earcup to your laptop or PC. When you do decide to use the microphone, there’s a dual cable that attaches allowing you to connect to the microphone and earphone jacks on your computer.

The second of the attachments is the boom mic, also attached by means of the 3.5mm, slightly off to the side of the main port. The microphone itself is flexible to allow you to position it as you please and at any angle. Logitech’s acquisition of Blue comes into play here, with its Blue VOICE technology featuring prominently on the microphone and supporting hardware. The voice clarity is great, with the supporting software including a number of presets to make quite a big difference. Users can choose between standard sound versus something more along the lines of a professional broadcaster. Such is the range of options and settings available, it takes up most of the features available on the software.

Some of the more noticeable features are aided by the design of the Logitech G Pro X, specifically the available attachments.

A third and fourth connection is built around DAC support available on the headset. The first of these is the USB DAC device, plugging directly into your PC or laptop. From there, there is a longer cable available that plugs into the USB attachment, which is also braided so as not to get tangled too easily. The cable itself is a shade over the 2m mark, which is great for gaming who have their rigs beneath their tables or game stations. The cable also includes a mic mute/unmute button, as well as inline volume control, allowing for quick increase or decrease of the sound without needing to physically do so on the PC settings.

The shorter cable doesn’t include the volume controls, but it does have its own built-in microphone on the top end. The cable is meant for mobile use, without the boom mic. That said, the inline mic doesn’t include the Blue VOICE support, which means the quality isn’t as great overall. 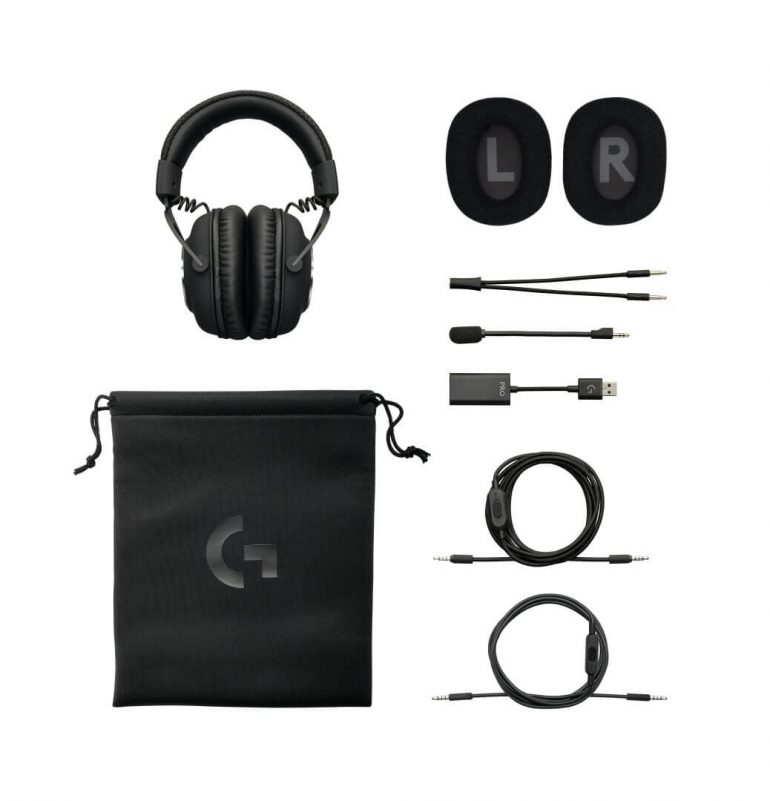 The Logitech G Pro X includes Hybrid mesh PRO-G 50mm drivers in each cup, which deliver great sound quality. Without any tuning a tall, the sound is well-rounded and natural, with great bass, great mids and highs. Whether you’re listening to music or playing games, the sound precision is very detailed. The best aspect from a music perspective is the deep bass, while still being solid enough across all frequencies so as not to be drowned out.

You can hear the different classifications of sound in-game, such as twigs breaking underfoot.

Moving onto gaming, for which the unit has been designed, there’s quite a lot to write home about. You can hear the different classifications of sound in-game, such as twigs breaking underfoot. The cluttering of the machine guns is crisp with the bang of the bombs quite evident, sending vibrations around the ears to create the effect. The spatial effects are also great, allowing users to pick up where the different sounds are coming from. It may not be full surround sound quality, but it works.

Overall, it’s not perfect, though, but very close to it for the price. If there is one aspect to touch on, it’s that the highs are less quality than the other ranges, but still delivers good enough results. 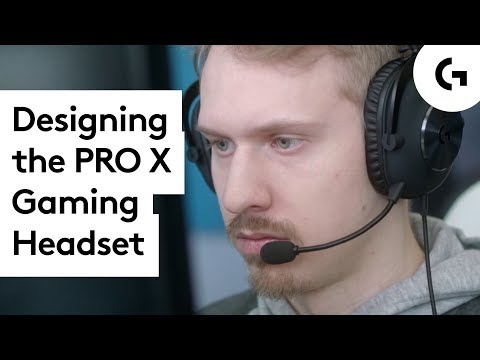 The Logitech G Pro X Gaming Headsets has gone from quite a big failure in 2018 to something that ticks all the boxes. Looks? Check. Sound quality? Check. Price point? Check.

At R2,499, the unit isn't as expensive as many other premium headsets in 2019. It delivers on the promises it originally set out to achieve in 2018, with a premium-looking and feeling product. If you're in the market for a gaming headset, and you don't require the use of multicoloured LED lighting effects, then the G Pro X is definitely for you.