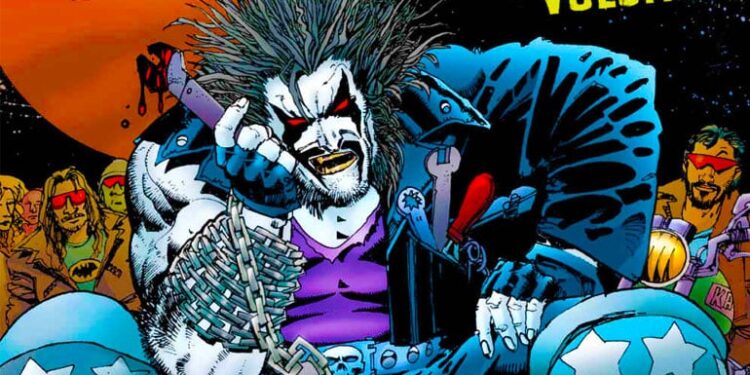 If you were a DC fan in the early ‘90s, odds are that you were a fan of Lobo and his over-the-top anti-hero antics too. He was DC’s Deadpool before Deadpool became popular. Yes, he was that damn awesome.

Given his unimpressive start in The Omega Men, Lobo seemed pretty average. However, after a few guest appearances in the hugely popular Justice League International series, a makeover in to a jeans-and-leathers biker badass, and kicking Superman in the junk, he became one of DC’s biggest characters. He even appeared in the DCAU Superman and Justice League cartoons! Bringing a level of anarchy and comedy, he also appeared in a couple of mini-series and one-shot specials before being given his own monthly title – and it’s the first two mini-series and three one-shots which make up this great trade paperback.

The real question is… what the hell took so long, DC?! Seriously, it took the better part of nearly thirty years to bring this out?! Meet Lobo. He’s the Main Man, the last Czarnian and the most ruthless, bloodthirsty bounty hunter in the galaxy. Or is he? In the first story arc, he’s tasked by the leader of L.E.G.I.O.N., Vril Dox, to transport a prisoner in custody. However, Lobo is annoyed to discover that the prisoner is his old school teacher who’s written a scandalous biography of him, one which has appalled and outraged countless people. Can Lobo put his personal animosity to one side and deliver her to Dox, while still causing mayhem everywhere he goes?

In the second arc, Lobo’s Back, the Main Man gets ambushed and is surprised to find himself dead and in the afterlife. Refusing to accept this, he raises hell in heaven in his bid for reincarnation… a plan which backfires horribly. Also, in other stories, Lobo accepts a contract to assassinate Santa Claus, takes a job in a harem of sex-starved women, and attends a comic book convention. What could possibly go wrong? If you were lucky enough to have read these in their day or bought previous TPBs like Lobo’s Back then you’ll know what to expect: chaos… absolute bloody chaos! They’re hilariously demented tales of death, destruction and mayhem with gleefully off-the-rails artwork (primarily from Simon Bisley, whose style electrified characters like the ABC Warriors, Slaine and Judge Dredd over at 2000AD). The dialogue is purposefully full of snide sarcasm and low-brow offensiveness, with an undercurrent of intelligent commentary. It’s purposefully un-PC in a world of political correctness, and self-aware enough to give some knowing winks to the reader while doing it.

The problem is that the passage of time has made these stories weaker. Some of the jokes are outdated, and as such they’re no longer quite as funny – especially in the Convention Special story. Also, Lobo was a product of his time. He was originally intended to be a satire of the ultraviolent comic book characters which were all the rage back then. Granted, the irony was that most readers didn’t get that joke anyway, but now he’s several steps behind. In an age when grim-and-gritty is the new normal for most “good” guys, where does that leave Lobo? However, those criticisms aside, the first story arc is amusing and a great introduction to Lobo; the Paramilitary Christmas Special is a perfect gift for those cynical about the holiday spirit; and Lobo’s Back is still a masterpiece of offensiveness. While Blazing Chain Of Love is a one-note joke of sexual innuendos, the Convention Special still has valid statements to make about the comic book industry and fans in general.

It may be a bit dated now, but this TPB is excellent value for money and highlights the Main Man at his best. This may even get the bad taste out of fans’ mouths after DC’s dismal New 52 Lobo “re-imagining” (so bad it was dubbed No-bo). But… damn, it’s good to see the classic Lobo riding high once more!