I have always been a huge fan and proponent of narrative in gaming and have always loved narrative driven games. Unfortunately, this genre of games can fall into the trap of not being interactive enough or dragging on at a slow pace. This can leave the player not feeling invested in the tale that the game tries so hard to weave. Dontnod Entertainment and Square Enix have decided to take on this genre with Life is Strange. Originally released separately as five episodes, Life is Strange places you in the role of Maxine (Max) Caulfield, a shy, photography obsessed 18-year-old who returns to the town in which she grew up in called Arcadia Bay. Max is haunted by visions of an apocalyptic tornado that threatens to engulf all of her home town, and is unable to tell if this is a true vision of the future or just an awful dream.

The story starts out like any other teenage drama as Max struggles to fit in at her new school. Things quickly take a turn for the supernatural, when Max finds herself in a bathroom witnessing a fellow student shooting and killing a strange blue haired girl. It’s during this traumatic turn of events that Max discovers she has the ability to reverse time, and thereby influence the outcome of events. Max uses this new found ability to save the blue-haired-girl from being shot and killed. Later she finds out that the blue-haired-girl is her long time friend who she has not seen in years called Chloe. This meeting between Max and Chloe sparks a series of events that intertwines their destinies as they try to solve the mystery of the strange events affecting their hometown. Both Max and Chloe are great characters (although Max tends to talk a bit too much), each of them feels grounded in the way they react to certain events which make it easy for the player to associate with them. I just found Max a really refreshing lead character in the way that she learns and grows from her experiences. Right from the start, Life is Strange wants you to realize that the decisions you make, no matter how small, could have huge implications down the line for Max and her friends. For instance, do you tell the school principal about the event Max witnessed in the bathroom or do you keep it to yourself? These choices may seem insignificant but can sometimes have huge ramifications.

The game also slowly eases the player into the use of Max’s ability, letting you reverse conversations with fellow students in order to win favour with them and find out more about them. It may seem strange, but I found that it was in these small intimate moments of conversation and exploration that Life is Strange truly shined.

The way in which you can explore the environments in Life is Strange reminds me a lot of a simplified version of an old adventure game. There is no running button for Max, which at first bugged me a lot until I realized that the game wanted you to take your time exploring the world that the developers so lovingly created. Players can wander around reading notes, viewing images and even solving some basic puzzles. It is by exploring that players uncover more about the town and its inhabitants, as well as the strange events that are taking place.

It is apparent from the start that the game wants you to care for its cast of characters, from the misunderstood bully to the damaged and depressed quiet girl that tends to keep to herself. What kind of relationship Max has with these characters depends on the choices she makes and the way she interacts with each of them. By far the most important of these relationships is with the blue haired Chloe with whom Max shares a special bond.

Players can’t always rely on the ability to reverse time as there are moments when the game takes away this ability. This forces you to remember, and use what you have learned through interactions with characters, in order to make some really difficult decisions, decisions that could affect not just Max, but any of the cast of characters in drastic ways. Seeing how these choices affect characters and how they learn and grow during the game is one of the highlights of my time spent playing Life is Strange. I found some of these choices gut-churningly difficult, as I started to really care about these characters and how the events affected their lives.

The mostly good voice acting and overall well-written dialogue makes it easy for players to start to care for these characters. What did take me out of the experience on occasions was the horrible lip syncing. It tends to get really distracting when you find yourself being sucked in by the story, only to notice that the characters facial expressions and lip syncing just does not seem right. Visually Life is Strange felt a bit hit and miss, there where moments, when the hand painted art style really, worked in favour of the narrative, and then there where the few moments when the game just looked ugly and awkward.

The story does start out a bit slow, but steadily builds momentum as time passes. The plot can sometimes become a little bogged down especially when it ventures into the realm of teenage drama; luckily these moments are few and far apart.

I would be doing the game a huge injustice if I did not mention the really great soundtrack. Each quiet moment of contemplation is punctuated by beautiful music or soothing lyrics. The game definitely has one of the best soundtracks in recent memory.

In the end, it doesn’t really matter that the lip syncing can be a bit off, or that that games isn’t necessarily the best looking out there, or even that the writing isn’t always on point. What matters is that Life is Strange got me invested in the characters and the intricacies of their lives, and made me care about how my choices influenced them. This is a game for those who can allow themselves to get immersed in a story, and allow the game to grab them, only to let them go when the end credits role. After playing the game, I still was left wondering how my actions could have changed the different outcomes for better. Life is Strange is a game that lingers in your mind long after you have finished it. 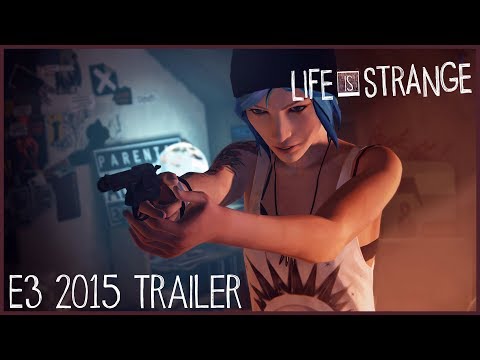