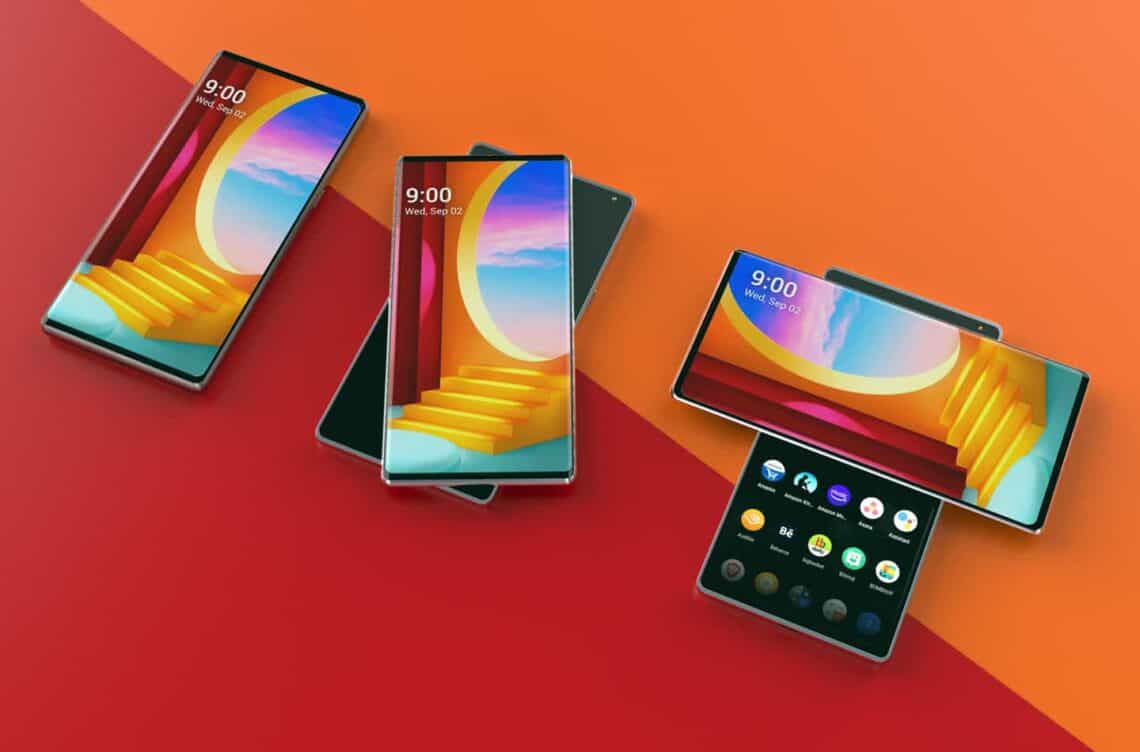 With each passing year, most of the leading brands continue to roll out new smartphone releases. Just as the animals await that specific time of the year, to migrate, gather food, or mate, so have we become to expect certain times of the year for each of those brands’ next release. Having settled into a familiar rectangular shape, especially in the last five years, we continue to ask ourselves what’s the next big evolution. With the LG Wing phone, the electronic giant thinks it has come up with the answer.

As we move towards a society of content creation over any other activity, so to do our tools need to adapt. The LG Wing phone was designed as an all-in-one companion for the content creator. It includes a build-in gimble to boost your filming, along with a slew of new features. As a first iteration smartphone to sport the technology, the question is asked whether this is the way forward. 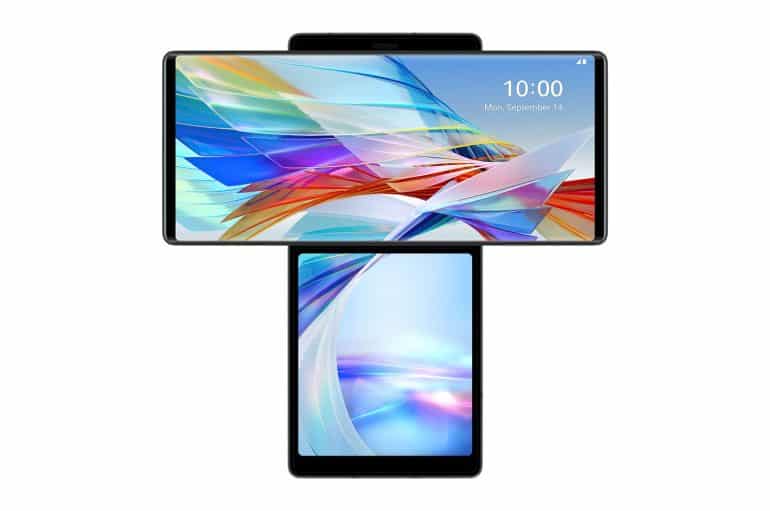 Upon first unboxing, the LG Wing is noticeably thicker than your standard smartphone. But there’s a good reason for that. The smartphone has a dual-screen approach, accounting for the thicker finish. And this is where the LG Wing’s unique feature comes to the fore.

To reveal the second screen, users have to flip open the device. But unlike many of the other dual-screen smartphones, it doesn’t follow the standard book-flip approach. Instead, the screen flips to the right at a 90° angle. This angled screen is also useful for another unique feature on the LG Wing, which I’ll discuss later.

In-hand, however, the LG Wing phone isn’t that difficult to hold. It’s also not that difficult to flip open the screen while operating the unit in one hand. That’s, of course, if you’re right-handed. It’s a bit harder to flip inward as a left-hander. It’s almost guaranteed you’ll be moving from a lighter smartphone when switching to the LG Wing and you’ll definitely notice this when carrying it on your pocket. Try not to wear a pair of loose shorts with this in the pocket.

The buttons and ports follow a pretty standard approach. You have your separate volume buttons on the top right-hand side, with the power button just below it. The Type-C USB port is on the bottom next to the speaker grille. 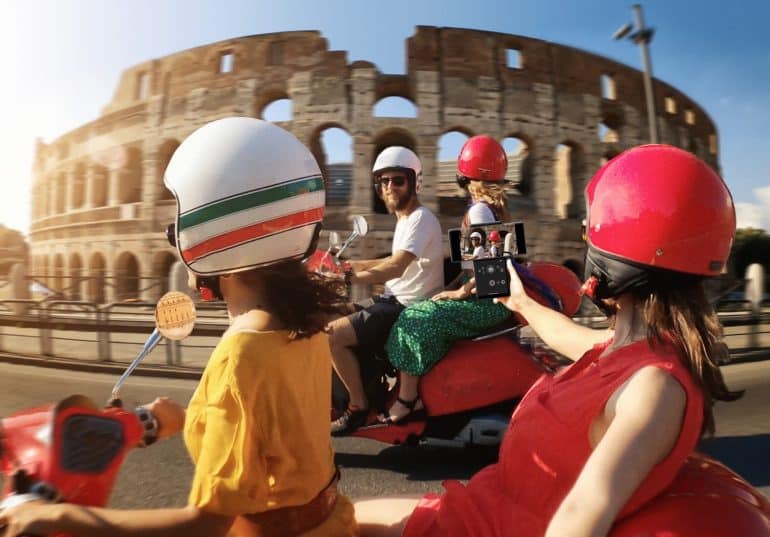 The LG Wing has a rotating P-OLED screen, which measures 6.8”. It has a 1080 x 2460px resolution with a 395ppi pixel density. In addition, it has an 87.0% screen-to-body ratio. Apart from very slight differences, the LG Wing and Galaxy Note20 have almost identical screen specifications. That said, it’s no match for the Note20 Ultra.

Flipping the main screen reveals the secondary screen. This is a G-OLED panel measuring 3.9” and a 1080x1240px resolution. The screen is handy when using the gimble function, but relatively small for all other apps. It would be great if the screen was integrated with more apps, used more to enhance the experience. The integrated apps include the camera app, gallery, YouTube and a select others.

One of the nice surprises about the LG Wing is that the main screen is uninterrupted. There isn’t a cut-out for the front-facing camera. Instead, you’ll find the camera as a pop-out feature. When using the camera app, simply toggle the selfie mode and the camera will pop up. Closing the app or switching it back will then move it back into its housing.

The screens itself are great. With LG being one of the leading screen manufacturers, LG smartphones always sport some of the best panels. It’s no different on the LG Wing. The colours are bold and bright and look very crisp. 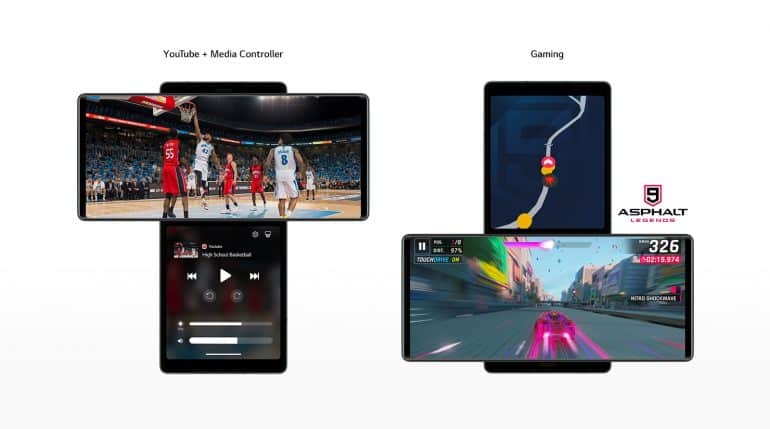 As previously mentioned, the front-facing, selfie camera is a pop-up unit, built into the frame. It has a 32MP lens, which is more than adequate. But the pop-up features isn’t just a gimmick. And neither is it just to add more screen for your viewing. Instead, it’s a requirement for the phone’s rotating screen, allowing for the best shots even when at an angle.

The rear camera is comprised of a trio of lenses. This includes a 64MP main lens, 13MP ultrawide and another 12MP ultrawide lens. The second lens is where most of the magic happens on the LG Wing. This is the primary camera when using the phone in Gimble Mode.

The second lens has a rotating sensor, which is handy. When rotating the screen, only two of the rear-facing cameras are in use. LG makes use of its “hexa motion” sensor for stabilisation, mimicking those gimble features. This is mostly done through software, using the ultrawide lens to cut off portions of the screen that aren’t required and when moving around can simply add those back into to create a stable shot.

It may just be a hidden trick via software, but it’s a great trick. The videos are great-looking, even when I purposefully moved around in excess to capture a unique shot. At times, I would even jump up or down a platform for effect and it wouldn’t be noticeable at all.

Despite owning a gimble myself, I still found this very novel and useful. I didn’t have to pack a separate gimble to shoot, instead of whipping out just my phone. The power of convenience. 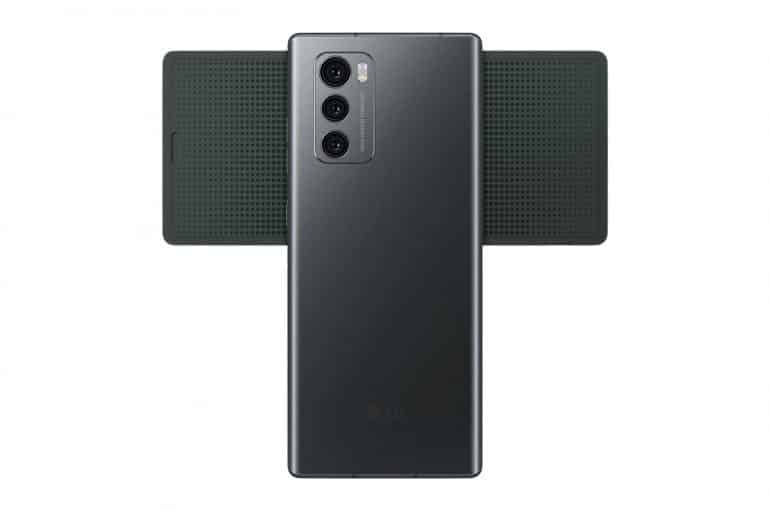 In terms of its specifications, the LG Wing phone sports a very decent Qualcomm chipset. That said, it’s not the latest around, but rather the previous generation flagship. Irrespective, performance is never going to be in question on the Qualcomm SM7250 Snapdragon 765G (7nm) chipset. It has an Octa-core CPU (1×2.4GHz Kryo 475 Prime + 1×2.2GHz Kryo 475 Gold + 6×1.8GHz Kryo 475 Silver). This is coupled with an Adreno 620 GPU, 8GB RAM and your choice of 128GB or 256GB internal storage.

When it comes to day-to-day use, you can’t fault the hardware, as it delivers snappy response and multitasking. However, where the unit does suffer quite a bit is in the software department. There were issues that popped up regularly, which couldn’t be resolved. Some of which even continued after a reboot. The magic turn it off and on again didn’t work.

These software issues included phone freezing, which meant I couldn’t unlock the phone or answer calls. After about 30s of trying, it would somehow work again, oftentimes the calls would have already been missed. Thankfully, I had my smartwatch, so I could answer the calls and hear the person on the other end, even though the screen was still locked.

The battery life, despite the second screen, was great. I had no issues going through an entire day under normal load. It could also easily last into the next day. However, because I would film a lot more often, it wouldn’t last into a second day. That said, I was more than confident of leaving home and going out to shoot for a few hours and still have sufficient battery life to manage with ease. I did this a few times, mind you. It packs a 4,000mAh battery, and in conjunction with battery saving features, you’ll have no concerns in this department.

I had a lot of fun with the LG Wing in the few weeks of the review period. There’s no doubt that the built-in gimble features made me want to shoot a lot more video content than I would usually. I didn’t care much for the second screen to be honest. Its sole function was to provide the controls for the camera when using in gimble mode. The other features aren’t intuitive or even useful.

You’ll also be the centre of attention when flipping the screen to shoot. There’ll be a lot more questions than time allowed to film the experience from those in the vicinity. It gets the job done really well, sacrificing some screen resolution for those stabilisation features of a regular gimble.

It was a love-hate relationship with the LG Wing phone. What it does well isn’t easily matched by other smartphones. But with no real use for the second screen and far too many software bugs. Both of these concerns, however, can be resolved with time and a growing ecosystem, which I sincerely wish would be the reality by the time the next iteration releases in 2021.

I loved my time with the LG Wing during the review period. I’d film a lot more footage than I would usually, even if the video wasn’t useful to any project. However, my experience with the novel smartphone proved difficult as a result of software glitches every other day. A few software patches down the road and the unit could definitely be a crowd-pleaser.