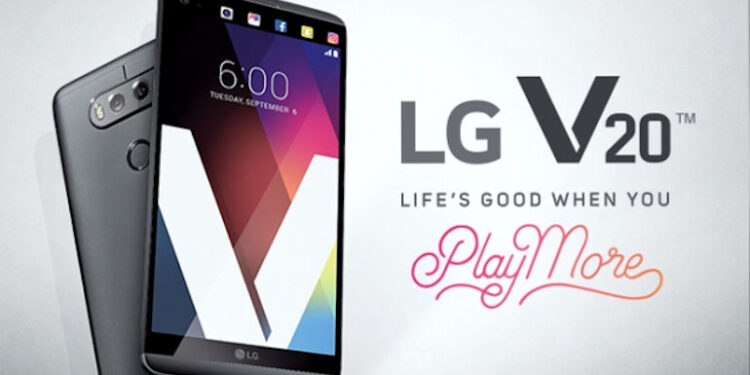 End of year sales are typically dominated by two major players, the Apple iPhone and the Samsung Galaxy Note. But with this year’s Note 7 debarcle, which has seen the sales go up in flames, almost literally, there’s a lot more room for other Android brands to make some gains towards the Christmas period. LG has recently released the V20, a smartphone that is said to deliver the ultimate performance for audiophiles and media creators.

Although the V20 isn’t the flagship device for the brand, that honour goes to the G5, but with a few shortcomings of that device, along with the lack of availability of the accessories launched alongside the G5, and high retail prices, there’s room for the V20 to take up the mantle. As the sucessor to the V10, the V20 builds on some of the good already available, and takes things to a whole new level, with a feature-rich experience.

Upon unboxing, you wouldn’t necessarily see much of a fuss in the build and design of the V20, but after a few short moments, you’ll notice there’s a lot more going on than meets the eye. For starters, there’s a second, ticker screen above the main screen, a dual rear-facing camera, a removal rear cover, and build quality that the competition could only admire. The beauty lies in the detail. All of these features have a purpose within each of the below categories, so I’ll limit the discussions here to the build and design only.

Being a long time user of a phablet in the form of the Note 4, the V20 feels a lot better in hand, without realising how large the unit is. It’s thin build and near edge-to-edge screen makes it very compact. The unit is thinner than both the Note 7 and Mate 9, while being only fractionally heavier than the Note 7 by 5g. Where the V20 stands out, however, is in its build quality in conjunction to the above. Featuring MIL-STD-810G certification, the unit has military-grade build materials, with a removable aluminium rear cover, which gives you access to the removable battery. The top and bottom of the front is made from a silcon polycarbonate material. So what does a MIL-STD-810G certified build quality mean to the average user? The V20 isn’t all the way rugged, but it can take quite a beating, and a number of drops from relatively high off the ground before it may even leave a scratch.

On the top of the V20 you’ll notice two mysterious holes, which are actually the IR blaster for remote functionality, and a microphone for better audio recording than conventional phones. At the bottom you have the USB3.1 Type C charging port, 3.5mm jack, an additional microphone and loudspeaker. The left hand side houses the volume rocker, and the right side the button to detach the cover.

Overall, then, the build quality and minimalist design of the V20 is great, and feels just as good in hand.

The 5.7″ screen is what gives the V20 its phablet label, protected by Gorilla Glass 4 technology. Although LG haven’t gone with the latest Gorilla Glass 5 option, it has gone with a slightly thicker glass to ensure a more robust build. The display competes directly with that of the Note 7 (not quite true now is it) with its 2560x1400px QHD resolution, which has a pixel density of 513ppi. If you include the addition of the ticker display, the unit measures 5.9″, with an additional 160x1040px resolution on the 2.1″ display. The main screen looks very good, and has good colour reproduction, crisp and clear images, good viewing angles and good under direct sunlight.

Where the V20 stands out, however, is with its second screen approach. Touted as an “always-on” display, it also comes with a number of settings and features to fully customise the experience, even setting the display duration, and times, so it doesn’t keep you up at night with the emitted light. Apart from the convetional information and time, the display can also be used to show your signature, task shortcuts, media playback, contacts, recent apps, and upcoming calendar events. The beauty of some of the shortcuts is that you don’t need to unlock the screen to perform certain functions. There are many that slate the V20 for not including the latest Qualcomm chipset, fitting the Qualcomm Snapdragon 820 instead of the Snapdragon 821. But if the last two years are anything to go by, there’s no real need for an all powerful, all conquering CPU, but rather how well it works in combination with the software. That said, the Quad-core (2×2.15 GHz Kryo & 2×1.6 GHz Kryo) works beautifully well, and during the two-week review period, I had zero issues with stutters, lags, or anything of that nature. The CPU is paired alongside the Adreno 530 GPU and 4GB RAM, and also includes 32GB or 64GB storage.

The V20 includes a removable, Li-Ion 3200mAh battery, which has varying results over the course of a single day. For the first half of the day, the unit manages to burn through 20-30% of the battery life, but then things quickly turn around consuming at almost double the rate. From the first half of consumption, the assumption is there that it could easily make it into a second day of usage, but it barely makes it to midnight of the same day.

If you’re familiar with some of the previous LG smartphones, you’ll be well familiar with the camera software and capabilities. The app has the additional feature, however, with the inclusion of the extra display, which allows you to switch between auto and manual video and photo modes. There are also a few voice commands you’re able to use, such as “cheese” to take your photo automatically, but that has a few hit and misses. Where the camera app really performs is when you start to tinker with the manual modes for both the photography and video modes. It does take a bit of getting used to, but delivers better results than the auto modes once you manage to perfect the settings for that single shot. The only trouble here is that you’d have to do it again from scratch if any of the conditions change, such as the landscape or object.

With its 16MP resolution and F1.8 aperture for the main camera, it pairs well with the 8MP and F2.4 dual sensor. The second camera allows for 135-degree wide-angle landscape images. The main camera delivers a lot more finer detail, with both lenses producing good colour reproduction and clarity. That said, the overall quality doesn’t quite match that of the Huawei P9 or Mate 9 Leica cameras, and a few other good cameras. The LG V20 doesn’t have a bad camera, far from it, but not good enough at the highest level. While image quality is great in good lighting conditions, the same cannot be said for low light photography, which suffers heavy graining.

The front-facing camera has a 5MP lens, with an F1.9 aperture, which delivers decent selfies for those who require it. The selfie cam also has a wide-angle, 120-degree shot, which makes for some good images and effects, and allows you to include more people in a single shot than a regular selfie shot.

The V20 includes 4K video capture support, along with Steady Record 2.0, which uses gyroscope-based electrical image stabilisation as well as digital image stabilisation. This makes for some good footage in situations where you’re required to be on the move, or simply if you don’t really have a steady hand. That said, there’s not a huge, if any, difference between regular stabilisation on the leading flagships than what LG has produced here. Video quality, much like regular photos, does really well in good lighting conditions, but not really in low light environments.

If there’s one thing I enjoy most about reviewing smartphones it’s the different versions of OS and UI variants there are. While some are basic with little additional features above the norm, others are really bad, but every now and then there are some good ones. Having reviewed two LG devices this year, both OS versions have been really good, and both uniquely different. The V20 is the first smartphone I’ve reviewed which has the Android 7.0 Nougat OS, and the first outside the range of Google phones to offer this latest version.

I’m not a fan of many of the pre-installed apps or the LG versions of the messenger, email, contacts and the likes. What I do find useful are the amount of features from the UI, the shortcuts, and how well everything is integrated together. There is one aspect that’s still missing, however, and that’s the Google Now tie in with the UI, which Sony has done well to integrate. The software also includes the Vulkan API, which is supposed to usher in console level graphics on your smartphone, but still in its early days, it hasn’t yet reached those levels, although the potential is there. The V20 has been marketed as the multimedia smartphone of choice, so it’s safe to say that LG has provided some useful tools, features and apps to make the most audio and video on the unit. The most basic of these is the headphone feature, which allows you to enable DAC support, powered by the ESS Sabre ES9218 to improve audio quality. At first I thought it’d be another gimmick where there would be no great difference between the two, but even using my car audio system made a dramatic improvement, which really surprised me. The earphones included in the contents are also really powerful, and while it isn’t the best I’ve used, it ranks among the top included smartphone earphones. In certain regions, LG has included a free pair of B&O earphones with your purchase of the V20, although I’m wasn’t able to confirm if they do that in South Africa.

LG has developed It’s Hi-Fi quality audio recording platform alongside B&O Play, which delivers good results thanks to its three microphones on the V20. The aim here is to be able to record more than just voice audio, but take your device with you to record a gig, or live music event, with clear sound recording and playback. For the most part, it works really well. There were one or two instances where the quality was average, but when it worked, it worked great. I would’ve expected a little more reliability for the system though.

The LG V20 delivers great overall performance, but lets itself down only by the lack of persistence with the features it offers. Had it been able to deliver 100% of the time, it would rate among the very top phones of 2016. That said, it is definitely one of my personal favourites for the year, despite all its flaws. I’m not the biggest audiophile, so the need to record audio and video Isn’t going to be top of my list of things to do. The only real let down on the V20 would be the overall quality of the camera, especially in low light condition, where the Huawei P9 is almost unmatched in this regard.

At a RRP of R10,999.00, the V20 Isn’t the most expensive smartphone for what it has to offer, and is a pretty decent buy in the end. The software features, along with the addition of the ticker display makes for great shortcuts and feature additions, which definitely make the phone worthwhile. At this price range, the V20 competes directly with Sony’s Xperia X, which it beats in all aspects apart from the camera quality. So, if you’re looking for a phablet to replace the Note 7 you may have had, or wanted, the LG V20 may just fill that role in 2016.