Lewis Hamilton Shows Off His Artistic Side in São Paulo 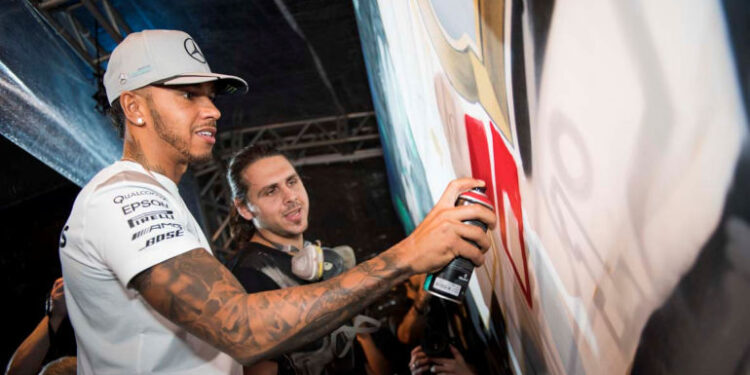 If you didn’t already know this about the 3-time F1 World Drivers’ Champion, Lewis Hamilton, he’s got an artistic side to him away from behind the steering. The Mercedes AMG Petronas driver has been known to delve into his music, playing guitar, and also recording a few songs. This time around, Hamilton has swapped his aggressive racing for a spray can in São Paulo, by helping create a graffiti mural alongside the Brazilian artists Los Kueios and Liam Bononi, which depicted his experience and attraction to the South American country.

Hamilton made the following statement: “I have a special affection for Brazil and for the people here. Whenever I’m in the country I’m always made to feel so welcome – and this time has been no different. However, I was really surprised when I got to experience the Brazilian underground culture up close. It’s so rich and full of style. It was an honour to share the production of the mural with the artists and the final result is something special.”

“It is a privilege for PUMA to have the opportunity to show the world Lewis Hamilton’s charisma and also showcase the street culture of São Paulo, going far beyond the global clichés of what Brazil is made of,” says PUMA Brazil´s Head of Marketing, Fabio Kadow.

During the event, roughly 100 special guests gave a warm welcome to Lewis Hamilton ahead of this weekend’s 2016 Brazilian GP at the Interlagos track.