Lenovo Miix 720 Review – Giving Microsoft A Run For Its Money In the past two years, laptops have mainly taken on two forms: the convertible and ultra-portable variant or the more powerful gaming unit. We already know that the convertible laptop has become quite a staple in modern design, having featured a number models on FoS already. These include the Lenovo Yoga 520 and the Acer Aspire R14 Ultra, amongst numerous others. The popularity of the convertible has meant that the other multi-form unit has taken a backstage in recent times, the 2-in-1. That said, with the continued success of Microsoft’s Surface ‘tablet’, it means that the variant won’t easily die out anytime soon, and leaves room for manufacturers to attempt to gain some success in the same space. Enter the Lenovo Miix line-up, the range of 2-in-1 units that have been modelled on the Surface Pro. But, despite glaring similarities in design, the Lenovo units have a lot to offer in their own right, competing well against the more dominant Surface range. I recently received the Miix 720 for review, the top-of-the-line unit from the Miix range. 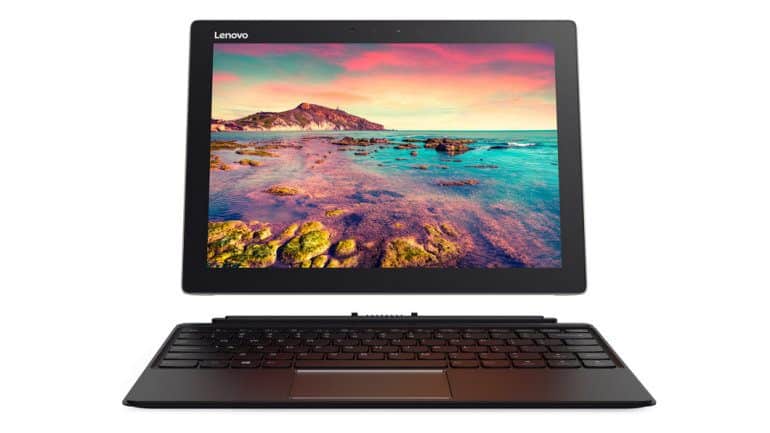 Being a 2-in-1 laptop, the unit is made up of two components, the tablet and the detachable keyboard. The tablet is made of a metal allow casing resembling an off-black look, known to Lenovo as Iron Grey. Unlike conventional tablets, the Miix 720 has a mix of different ports and layout to make it a lot more versatile. The standout feature on the tablet is its kickstand on the rear. The stand has a 150-degree extension by means of its watchband hinge allowing for much less area to be used by the hinge, while also keeping a fairly flat surface area.

The tablet connects to the detachable keyboard (with backlit keys) by means of a magnetic connection, which simply clicks in place without too much effort in positioning it.The detachable keyboard is made from faux-fabric, something of a mix between leather and suede. The keyboard itself is quite evenly spaced, and very nice for fast typing without any issues. The only gripe I had was a mix of keys on the right-hand side to make the use of additional keys like the ‘home’, ‘end’ and the likes a bit tricky to get to and remember at first. Despite the two individual parts being fairly solid and easy to use, its usefulness for portability is a bit questionable. The hinge is very capable and sturdy, but setting the unit up with the keyboard on your lap is fairly challenging, although doable. It’s best used on a desk or table when trying to make use of the keyboard to get your work done on the fly, which makes for a lot better functionality with a sturdy base.

The unit weighs just under 1.2KG with both components together. This is fairly standard, and slightly heavier than the Surface Pro. In terms of the previously mentioned ports and layout, the Miix 720 has you covered with almost all your requirements. All of the ports are fitted to the tablet, with the left side including the Thunderbolt 3 port, a USB 2.0 port and a 3.5mm jack. On the right, the unit has another USB 3.0 port, SD card slot, as well as the power and volume buttons. A 5MP camera is fitted to the rear, along with a 0.9MP infrared webcam on the front middle. The Miix 720 is somewhat future-proof compared to the Surface Pro in this regard, though, as the latter doesn’t have any Thunderbolt or USB 3.0 capabilities. 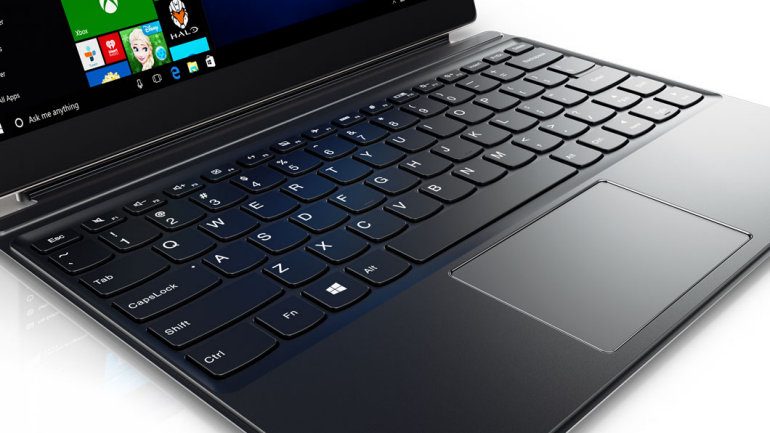 One of the surprising and standard-out features on the Miix 720 is its screen. The unit has a 12″ IPS panel, which has a 2880x1920px resolution. This makes for great viewing as the unit also produces bright and vibrant colours that are just spectacular to watch movies on the go. With many of my movies available only on 1080p resolution, I did most of my higher res watching on YouTube, which has a ton of material available. There’s quite a lot of additional information you’re able to pick up with the increase in resolution such as the grass, foliage and a number of different patterns in the dirt and other textures you may have missed on lower resolution versions of the same video. That being said, watching upscaled 1080p videos on the unit was still great.

In terms of overall brightness and colour, however, the unit is only a few points below the Surface Pro, while still outclassing many of the other units in the same category. Where things do come a little unstuck is the glossiness of the screen, which is also a bit on the fingerprint prone side. Nothing too severe, though, as it’s fairly easy to wipe away without too much effort in the end.

Given the unit’s 2-in-1 status, needless to say that it’s touchscreen too. What I found additionally impressive was how easily it was able to track my finger across the screen with almost zero latency to speak of. This comes in handy when it comes to the Pen as well, which is further discussed below. 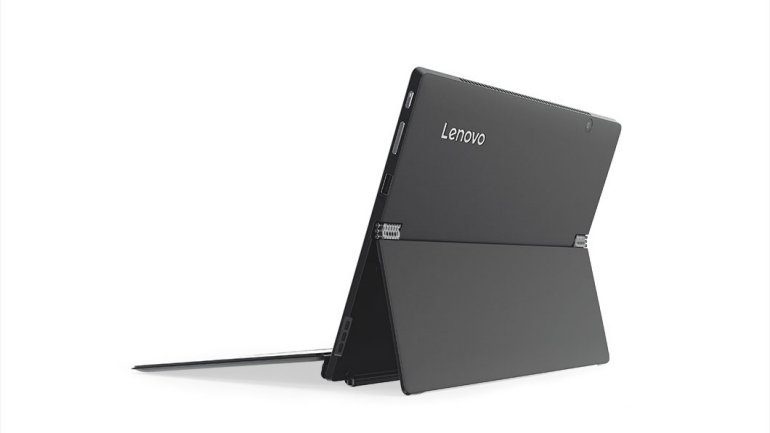 The Surface Pro is one of the more powerful units around in this category, one of the reasons it’s become so popular. The Miix 720, being the top of its range, is also specced to compete with the Surface in this regard. This includes a 7th Generation Intel Core i7-7500U Processor with 2.70GHz clockspeed, Intel’s onboard HD Graphics 620, 8GB DDR4 (2133MHz) onboard RAM, and a 512GB M.2 PCIe SSD. The setup is almost picture perfect on paper. And it doubles up in the real world too. Booting up takes a matter of seconds. The basic setup is also a lot lighter than other modern laptops when it comes to bloatware. Putting the unit through its paces on the various benchmarks shows that the Surface Pro comes out on top, but only just, often less than 5% in it in the end. The overall performance is really great and really smooth. The unit ran better than most other units I’ve tested with a lot more real estate to work with, and promised a whole lot more. That’s saying something. Everything just runs, and runs well, contributing to how it all fits together.

Where the unit does come up short is the battery life. On an average day you’re able to eke out around 6 hours of life for continuous use, down a bit when you’re in all-out power mode. Compare this to the 8-hour plus battery life on the Surface Pro, and things really seem to go pear-shaped. 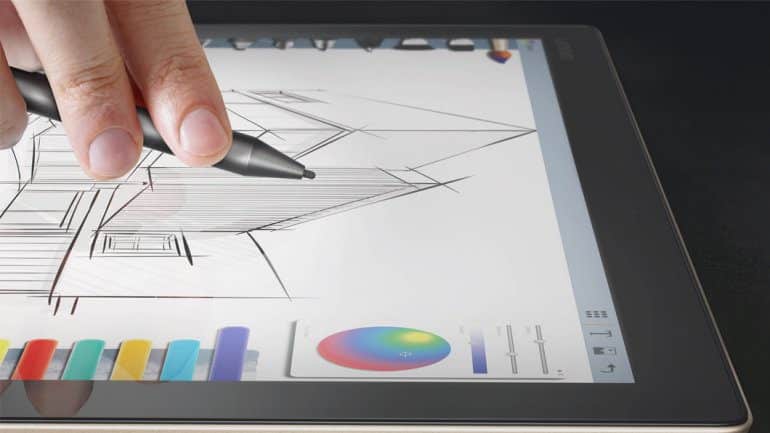 Another advantage the Miix 720 has over the Surface Pro is its inclusion of the Active Pen in its contents. The Pen is quite useful for designers. When coupled with the low-latency touchscreen, it makes for very fine drawing capabilities. The Pen can be used for a myriad of other users where need be, but is most effective while drawing and designing. The tip of the Pen is also pressure sensitive, which allowed me to change the thickness of my strokes without changing the pen type. If you don’t have the keyboard on hand, you can use the pen to write down notes during meetings and the likes.

The Pen has become a must-have piece of equipment on modern touchscreen laptops, and tablets, and has done quite a lot to increase productivity, moving away from it being simply a gimmicky extra or nice-to-have. 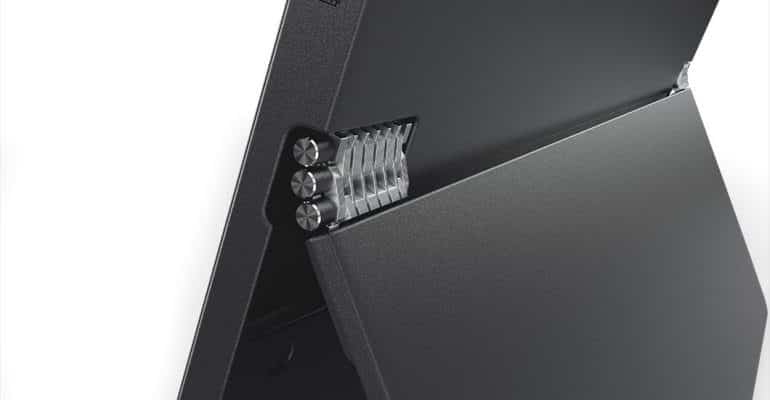 The Lenovo Miix 720 is a very well-rounded device that has a lot to offer. The unit provides some really good viewing capabilities on its high-resolution screen. In addition to the powerful specifications under the hood, the unit provides great performance where need be. Unfortunately, the it does let the team down a bit in terms of its overall battery life. This isn’t too much of a concern, however, as there are a lot of additional features that make up for this.

The unit has a retail price of R24,999, which isn’t cheap. That said, the latest Microsoft Surface Pro with similar specs will set you back a cool R34,999. That’s 40% more in cost between the two devices. Like for like then, the Miix 720 comes out as the better buy when compared to the Surface Pro.