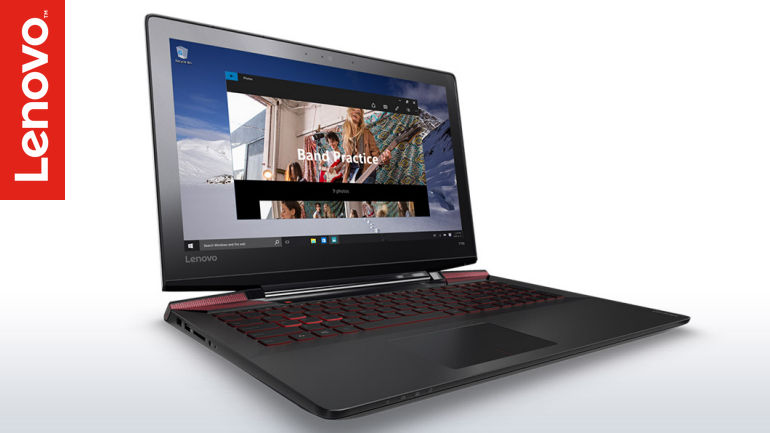 Gaming laptops are among the fastest growing segment in the tech industry, even within the gaming sector itself. The introduction to the market has been a huge success in the world of PC gaming, as it offers a painless alternative with its pre-built configuration, along with the added benefit of being portable. While gaming laptops don’t quite match the performances of the conventional desktop rig when squared off part for part, it has come a long way in recent years. Lenovo have added to this market with their version of an entry-level gaming laptop in the form of the IdeaPad Y700.

Despite it’s entry-level status, there’s a lot to discuss about the IdeaPad Y700 as a gaming laptop, and whether the industry can do with another unit in this ever growing space. The short answer to that is yes. Even without starting the review, a growing market always provides better competition, and, in the end, better products for the consumer, despite the waters becoming murky as to which units are worth its salt. You won’t be getting much joy in the form of Ultra graphics on the Y700, but what you may get is value for money. We examine the unit, what it has to offer, and whether Lenovo did a good enough job to consider it a worthwhile purchase, or just another gaming rig vying for your attention. 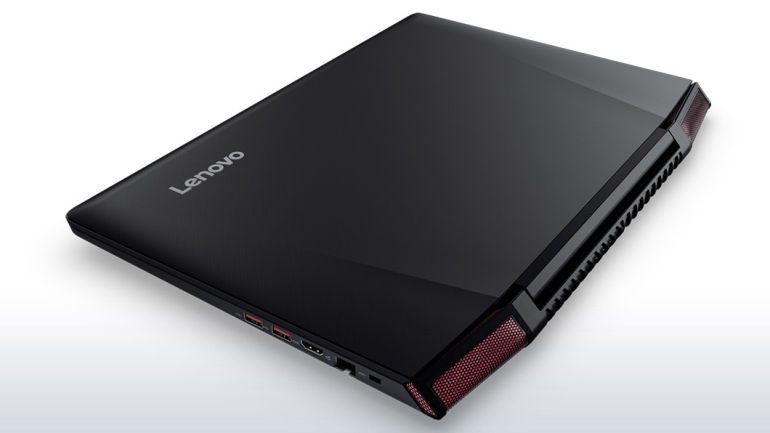 Although it may not necessarily be a major deciding factor, the build and design of any gaming laptop does play a critical role in first impressions. Even if the design were to later fail on your expectations, if it draws you in from the start, it may have already done its job. As is the norm in modern gaming laptop builds, the Y700 has an aggressive look, which, by modern standards, translates to it meaning business. There are red highlights across the entire layout of the unit, from the keyboard backlighting, speaker grills, stickers and more. The Y700 also has a very angular design principle, with even the lid not having the regulation two-sided hinge setup, but rather a single hinge in the middle. While most laptops build on the fact that the keyboard area and screen form part of a singular unit, the Y700 looks as if the two are completely separate entities.

Despite the more aggressive look and accents, it fits the mould of the standard IdeaPad with its brushed aluminium finish that is carried throughout the design; both the lid and bottom. The lid, however, has a bit of an issue in repelling fingerprint smudges, as within the first few minutes of unboxing there were already a number of smudges observed. The finish is also not the easiest to grip and, thus, users have to be particularly careful as to how they hold it in hand. Unlike the outer covering, the inside has a rubberised plastic finish, which feels a lot different, and is a lot less smudge prone, also does suffer the odd smudge or two itself. The top side of the inside, below the screen panel, has a harder plastic finish covering the speakers, which fold over to the rear, protecting the vents. The hinge is made of a slightly software, yet still firm plastic, while also being quite hard to open and close the lid. You’ll definitely need two hands for this.

The unit weighs a fairly hefty 2.6kg, which isn’t overly concerning given the segment it finds itself competing in. It also measures 387×277 x25.95mm, which is quite a bulky unit given the 15.6″ screen size. The unit has the standard amount of ports and interfaces for a modern day laptop, with the glaring omission of the future proof USB3.1 Type C port. There are two USB3.0 ports, one USB2.0 port, a full-sized HDMI, SD card reader, 3.5mm audio jack, Lenovo DC-in, Ethernet and Kensington lock. There’s also the addition of wireless connectivity in the form of dual-band AC Wi-Fi and Bluetooth 4.0.

Overall, the unit has an extremely solid built, with no squeaks to speak of. It isn’t an unpleasantly hard surface either. The design, however, isn’t the most pleasing, but is sufficiently well crafted not to complain about any really bad options. As stated earlier, the Y700 unit we received for review has a 15″ IPS screen, with a resolution of 1920x1080px. This equates to 127ppi pixel density with a 16:9 aspect ratio for the anti-glare display. Unfortunately, the panel does not have touchscreen capabilities. Personally, I’ve never been a big user of the touch panel display, although they are pretty useful on hybrid units. Although there is a larger 17.3″ screen variant, it too doesn’t offer a 4K resolution, although there are a few variants, one of which offers touchsceen capabilities. Inevitably, this would no doubt push up the starting price for the “entry-level” Y700.

On its own, the display looks good, with good colour reproduction, viewing angles and deep blacks. The only trouble the display has is when you compare it directly alongside a more premium unit, after which you’ll notice slight pixelation and washed out colours. Buyers of the Y700, however, should not mind too much, as you won’t be spending much of your time comparing the unit to your neighbours. The keyboard has dimensions of 340x102mm, which has two-level, red backlighting across all keys. The keyboard also includes full-sized arrow keys, along with the numpad. The keys are soft and fairly shallow when depressed, but don’t have the same tactile and mechanical feedback as with most gaming laptops. It takes a bit of time getting used to the keys due to the shallow travel, but it’s nothing too serious. Where the keyboard suffers is its lack of programmable keys and macros, something gamers have become used to over the years. Lenovo also hasn’t included any tracking or recording software to analyse keystrokes, but this may not be something all users require.

The touchpad, on the other hand, has a relatively large real estate with a matte plastic finish, which provides smooth and comfortable usage. The Synaptics drivers allow for up to four fingers to be recognised together along with a number of gestures. There are a few inclusions to the software that are quite useful, such as the disabling of the touchpad while typing or using the keyboard during activities such as gaming. On occasion, you will get the odd slide of the mouse, but I was surprised as to how well it worked. The right and left click buttons are integrated into the touchpad’s single surface, and are soft with very little tactile feedback, which requires a slightly higher amount of effort to register a click. 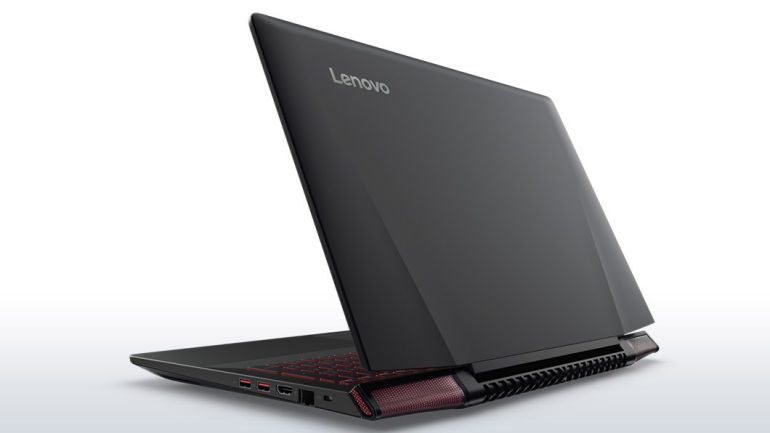 The Y700 sports an Intel Core i7-6700HQ CPU, and comes with one alternative, the Core i5 processor. The unit has very limited options when deciding on the GPU variant, with on the Nvidia GTX 960M available, which has Optimus support for more efficient battery use. The CPU has a maximum clockspeed of 3.5GHz depending on system load, which should be more than sufficient to tackle most tasks. Additionally, the unit is available with RAM of up to 16GB, which the review unit included. The unit we received also had a 128GB SSD and 1TB HDD pairing.

Last year’s version of the Y700 included the Haswell chipset, whereas the current model has been upgraded to the Skylake processors, which perform similarly under single thread operations. The Skylake chipset, however, outclasses the Haswell series in multi-threaded tasks by up to 25% according to certain benchmarks. The combination of such a powerful CPU, 16GB of RAM and an SSD makes the Y700 a really powerful computing unit, outside of anything gaming related. The unit performed well even under the harshest of computing I could throw at it, always running smoothly, while still being able to multitask as the testing was being conducted in the background.

The unit is fitted with a three speakers, two 2W stereo JBL speakers, with a 3W subwoofer fitted to the underside. The speakers reproduced fairly loud, clear sounds with no static, noice or any other distortions to speak of at the highest volume. The addition of the subwoofer removes some of the tinny sounds often associated with laptop speakers. Overall, audio quality is good, and you don’t necessarily need a set of headphones to compensate for the hollow sounds of conventional laptop speakers.

In terms of the battery performance, Lenovo has fitted a 4 Cell, 60Wh battery pack to the Y700. Unlike many other manufacturers, Lenovo opted for a non-removable option. Although it didn’t deliver miraculous battery life, it still managed roughly six hours at a time, which is pretty decent for a gaming laptop. Lenovo also has a few built-in battery saving settings and features, which typically kick in around the 30% mark.

While out and out computing performance is great on the Y700, the gaming performance underwhelms slightly, with only above average results. Gaming load times were really good, but the settings had to be turned down slightly on some of the more graphically intensive games such as Project CARS, MKX, and a few others. The GTX 960M has 4GB VRAM, with 1097MHz clockspeed, and 128-bit memory. The 960M is featured on quite a few of the entry-level gaming laptops, which one method of keeping costs to a minimum. It would make sense if there were other variants of the Y700 that catered for the more hardcore gamer, especially when you consider the computing power behind the unit.

Overall, the raw GPU performance is reasonable with average benchmark scores. I don’t have many complaints given the card option and cost, as the 960M is at least capable of playing each game I tested at 1080p resolution. I’m not sure if there’s an to upgrade the GPU on the unit as an after-market add-on, but that could go a long way in upping the gaming capabilities of the Y700.

There’s nothing major to report on the standard software side of things, running Windows 10 Home 64-bit. However, there is quite a lot of bloatware added to the unit. I counted 11 Lenovo-branded applications, along with another 5 or more other branded applications also pre-installed. This is quite frustrating, although there only a handful of applications that appear in the startup to be disabled. 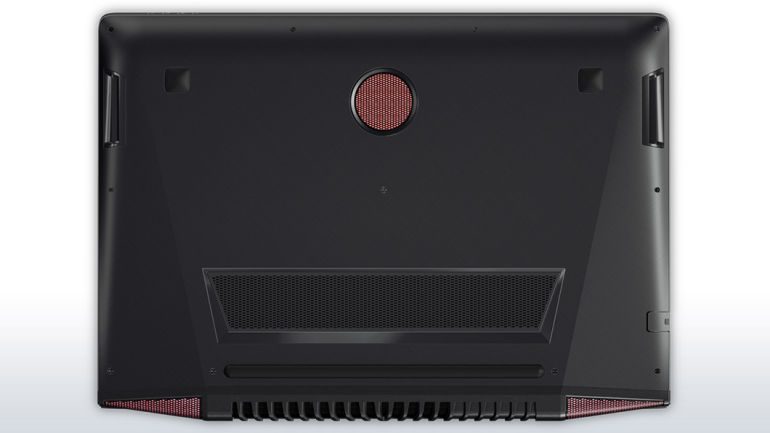 The market for gaming laptops continues to grow, with more and more options available for prospective buyers. Some users prefer the thin, lightweight and elegant approach to purchasing laptops for their portability, but others prefer to double up with an additional requirement of being able to game when on the go. The Lenovo IdeaPad Y700 fits the mould of a powerful work laptop, with the option to switch on a few games whenever the need arises.

While the unit is touted as being entry-level, there’s still a fairly substantial pricetag added to the unit. With an expected cost of R19,999 at Evetech, the Y700 may not be the perfect solution for casual gamers. It does, however, come with a free gaming mouse and mousepad. That said, the unit delivers quite good computing performances, with decent enough gaming performances to keep most users happy.