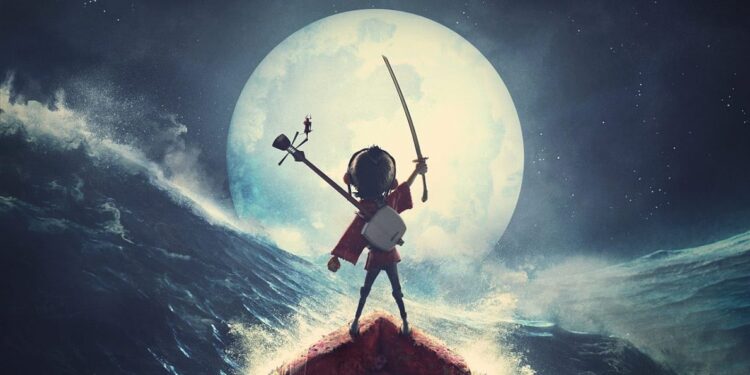 In a world where Pixar’s 3D animation has dominated, the epic and visually-stunning fantasy animated film Kubo and the Two Strings is both a triumph for traditional stop-motion filmmaking and traditional story-telling. It’s a mature but magical story where origami papers come to life in the form of warriors and birds in the hands of the film’s narrator and hero, Kubo. Animated movies aren’t usually this deep or this smart. “If you must blink, do it now. Pay careful attention to everything you see no matter how unusual it may seem. If you look away, even for an instant, then our hero will surely perish,” the narrator warns as we are introduced to the breathtakingly beautiful world of Kubo.

Despite being produced by U.S. based Laika, the company that created Coraline, ParaNorman, and The Boxtrolls, Kubo’s story transpires in a mythological feudal Japan. It follows a young boy named Kubo (Art Parkinson) who devotedly cares for his sickly mother in their sleepy shoreside village. In order to earn a living, he tells stories about a samurai warrior to the people of his village. However, his world is shattered when he accidentally summons his vengeful family members, who include two witches. Kubo’s fate lies in the hands of a wise monkey (Charlize Theron) and a comical beetle (Matthew McConaughey) he befriends on a quest to find magical armor to protect him from a forthcoming assault. A bizarre, supernatural family drama unfolds. Kubo and the Two Strings’ warm, hand-crafted aesthetic brightly shines through even the dimmest scenes. It’s a film rich with wonder and colour for viewers of all ages. Filled with visceral thrills and visual splendor, it champions a strong message about losing family and overcoming loss. You’ll be swept across unruly seas, lush landscapes and stunning backdrops as our hero challenges monsters and gods along the way. However, what’s most remarkable about the storytelling is how it successfully balances tragedy, humour and adventure. Kubo and the Two Strings’ charm will stay with you long after the closing credits. It’s a story that resonates with the heart.

Could this be the year’s best-animated film? It might be. At the moment, the only competition it has is Zootopia, which also had a deep issue at its core. Nevertheless, Laika has delivered a winner.