Back when the PlayStation 4 was announced, fans were treated to the news that platformer icon Mark Cerny had helped develop a new 3D platformer that would be a launch title for the system. While Knack did show potential, it was let down by a lacklustre story and simplistic combat leaving many excited fans disappointed. A few years later, and to everyone’s surprise, Sony announced that a sequel would be heading to the PlayStation 4. So, does Knack 2 rise above the shadow of its predecessor or does it sink even further into mediocrity? The story takes place sometime after the original. Things start off with a boom as we find the city of Newhaven under siege by an army of robots. It’s up to Knack and his human companion, Lucas, to save the day. Just as things get exciting, players are treated to a flashback that helps explain the present day events. Over the course of the game, players will learn more about a new faction of goblins, receive training from a group of monks and battle hordes of robots (and goblins). However, it takes some time for Knack 2 to get going as it slowly introduces players to the various mechanics of the game. Although the story does have its fair share of twists and turns, it is clearly aimed at a younger audience. As with the previous game, players take control of Knack, whose core ability is being able to gather ancient relics in order to grow his size, gaining more strength and resilience in the process. It’s this growing and shrinking mechanic that forms the basis of the gameplay in Knack 2. Players will need to grow and shrink to traverse certain environments, which mostly boils down to shrinking in order to fit through tight spaces or climb narrow ledges and growing when facing off against enemies or picking up heavy objects. Knack’s growing and shrinking ability allow for some interesting platforming and exploration puzzles.

While on the subject of abilities, Knack is also able to absorb certain objects such as ice and metal. Absorbing these materials affords him new abilities that pertain to that specific material, such as ice breath when absorbing ice or being able to create a solid iron statue for weighing pressure pads down when absorbing iron ore. Each of these abilities creates opportunities for some challenging puzzles. As with most platformers, Knack 2 has you traversing all sorts of dangerous environments, tasking you with crawling through narrow spaces, jumping on various platforms or moving objects in order to pass certain sections. While the environments are mostly linear, I found that this helped keep the experienced focused. The continually changing environments and ever more challenging platforming kept the gameplay from becoming too repetitive and feeling stale. Knack is not only good at jumping over and on top of objects, this time around he’s quite the fighter. Where the original game gave you a limited move set to defeat your enemies, Knack 2 adds a few more. However, it still keeps it simple enough for a younger audience to come to grips with. Knack can unleash basic combos, kicks, punches, parry and, of course, block incoming projectiles and blows. As Knack progresses through the game he’ll unlock additional skills such as a quicker parry or being able to rain down a combo of deadly blows.

It quickly becomes important to prioritize targets and attack certain enemies with the correct attack. For instance, shielded enemies need to be attacked using a heavy attack first in order to break their shield, opening them up for further assaults. As mentioned, when in combat, big Knack is more resilient to damage from enemy attacks, while small Knack can be killed in a couple of blows. This makes deciding when to shrink or grow rather important. Combat difficulty does increase steadily for the most part as the game progresses making enemies even deadlier. Knack 2 can also be played with a co-op partner which, for the most part, is surprisingly fun, especially during the combat sections. Platforming, on the other hand, can be a bit more challenging, depending on how well you and your partner can work together.

While the game looks good visually and has players exploring some interesting and varied environments, most of the characters, including Knack, are generally bland and forgetful. I never found myself caring for Knack and the plight of his fellow characters. I tended to see Knack more as a means to beat up those who stand in my way or getting from A to B rather than a fully fleshed out character. Knack 2 does solve many of the issues found in the original game and it definitely is a step up, however, it still feels like a missed opportunity. While I did find the combat and platforming to be more varied and enjoyable, the game is let down by a lacklustre story and bland characters. 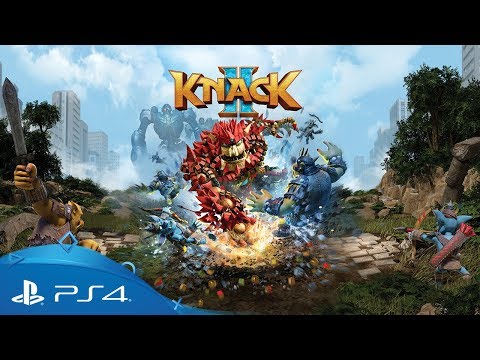