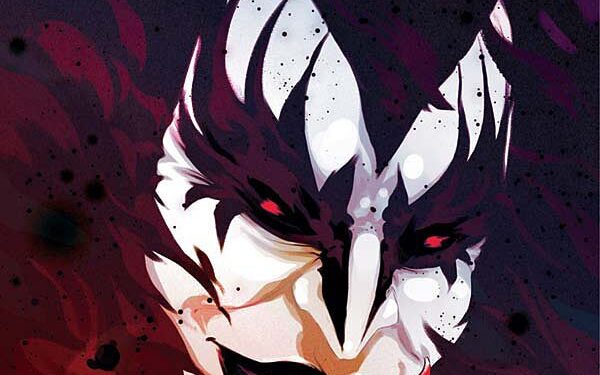 The rock band KISS have had a long history with comic books. Starring in them, they’ve hung out with Howard the Duck, the X-Men, Archie Andrews and more. Outside of them they made a film in which they were superheroes, and had their own blood mixed in with the ink at the Marvel printers… however, apparently it’s really only Gene Simmons in the band who’s a huge comic book fan. But what kind of comic book should fans expect from the rockers now? Based on this first issue, a damn good one.

In an absolute switch from what anybody was probably imagining, the world above has been ravaged by wars and the human race’s capacity for self-destruction. In the subterranean city of Blackwell, over two million people – the last survivors of humanity – live in a society of order, presided over by the unseen elders. Four familiar symbols are everywhere: The Demon, The Catman, The Starchild and The Space Ace. Yet there’s dissent amongst some of the youth, in particular the twins Eran and Noa, who question why nobody may travel to the surface.

Acquiring a map which they believe may lead them out, and joined by their friends Adi and Alex, and discover that there’s more happening in their society than they ever could have imagined. Seeing images on the tunnel walls of four people wearing makeup depicting the symbols of their society, they explore further. Soon they find an agricultural area and a monastery containing an ancient computer, and soon the answers they seek will be revealed… Instead of what could have been just another bog-standard tale of KISS either being superheroes or rock stars meeting superheroes, what you have is something genuinely innovative. We’ve seen future dystopias before, and on the surface of it this seems to be like many of the YA fiction tales set in them. However, this offers up the potential for something different. We don’t know that Blackwell is a bad place, but we sense it. The symbols of the band members being used in society makes us feel uneasy, because there’s a gnawing sense that they’ve been subverted by an evil bureaucracy.

Or, alternatively, KISS helped to build a better world… but it sure doesn’t feel that way. The kids in this story are all about what KISS represented, that sense of rebellion and rocking against the establishment. It’s an interesting idea, especially since KISS themselves don’t even feature in this issue except as images on walls and holographic projections. So far this is about the kids and the mystery, and it’s a very smart move.

The art is fantastic, easily making this one of the best looking books out there, and if there’s any drawback it’s that on occasion the dialogue doesn’t seem unique to each character. However, the total package itself is incredibly effective.

KISS are back in comics, and it’s time to rock and roll all night (and party every day) once more.